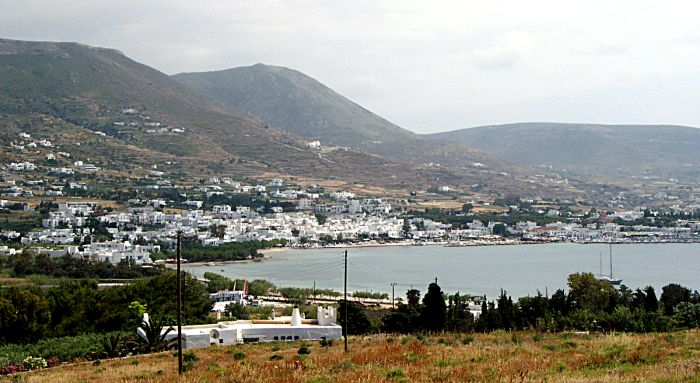 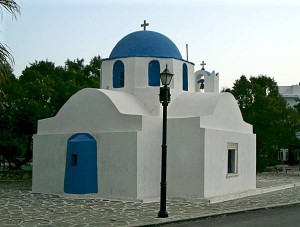 Paros is among the most popular islands of the Greek Cyclades. Known these days for its role as a ferry hub and with a quieter atmosphere than that of the party islands of Mykonos, Ios and Santorini, its original claim to fame was as a source of the fine white marble that the island is almost entirely composed of. Its villages, particularly Naoussa, Parikia and Lefkes, are perfect samples of Cycladic architecture with houses built in the traditional style, with flat roofs, whitewashed walls, blue-painted doors and window frames and shutters, and with labyrinthine paved streets and blue-domed churches. 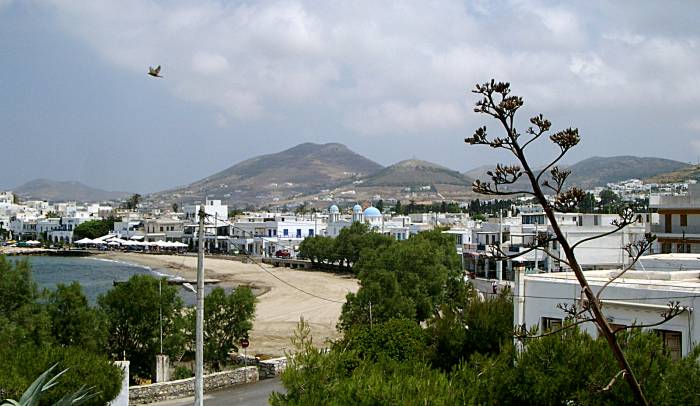 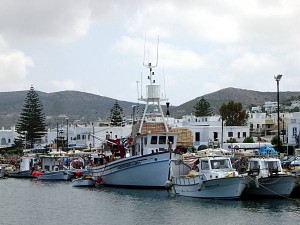 Parikia is the capital of Paros and has about 3,000 inhabitants. Numerous restaurants, taverns, cafes, bars and night clubs face out to the harbour from the coast road (which is closed for the cars during the evening). Before heading to our hotel we got our bearings by stopping for a cup of coffee at one of the cafes. Surprisingly, it was served with a complimentary slice of sweet honey cake. Our room at Hotel Nikolas, just a short walk out to a point, continued the white with blue trimmings theme and had a great view of the coast from our window.

Back in town, we hired a 50cc motorbike, with which to tour the island for a couple of days. It was certainly easier to manoeuvre and more comfortable to ride than the quad bike we had on Mykonos. 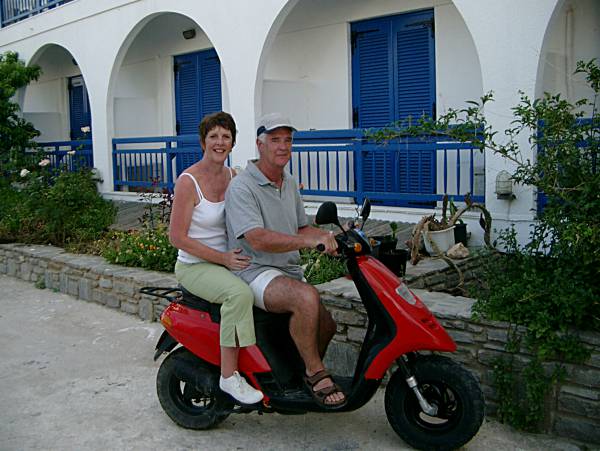 While in town we wandered the narrow streets to find the various points of interest. Near Parikia’s main square is the town’s principal church, the Panagia Ekatontapiliani, literally meaning “church of the hundred doors” as it is a church within a church, within a church! It is considered as one of the most important Byzantine monuments still standing in Greece. 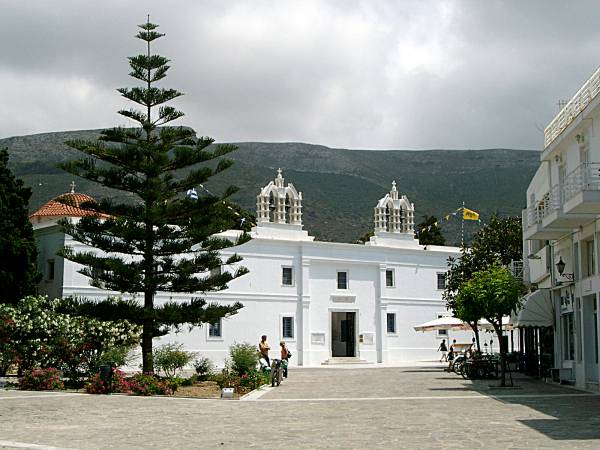 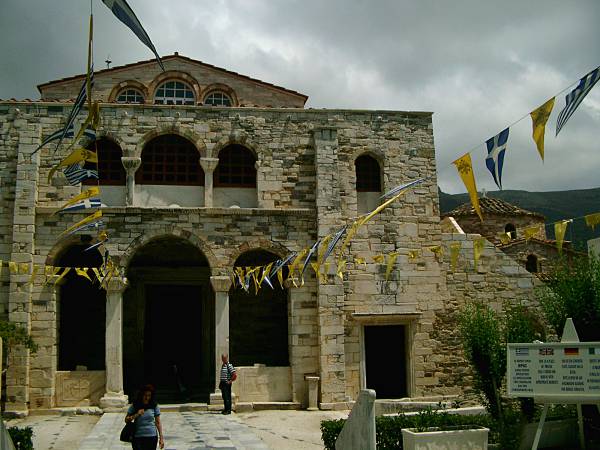 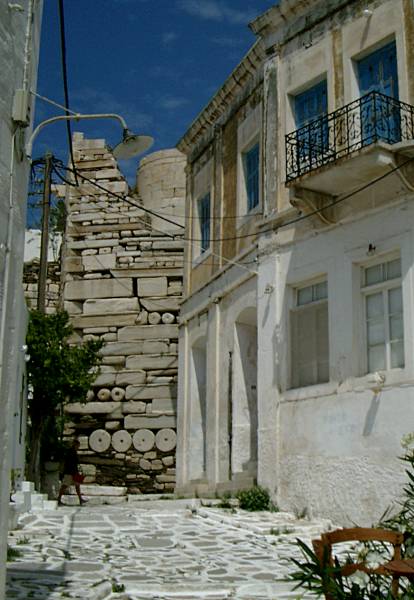 Further up the hill, part of the wall and a tower of a medieval castle, known as the Frankish castle, built almost entirely of the marble remains of an ancient temple dedicated to Apollo, can be seen.

Close to the harbour, near the motorcycle hire place, the remains of an ancient cemetery are visible, having been discovered during digging work on the site. This ancient cemetery dates from the 7th century BC. It was formally excavated in 1983 to discover Roman graves, burial pots and sarcophagi, all now floodlit at night. 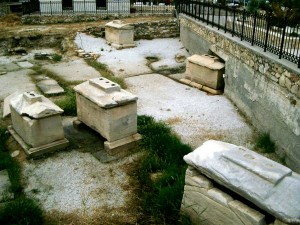 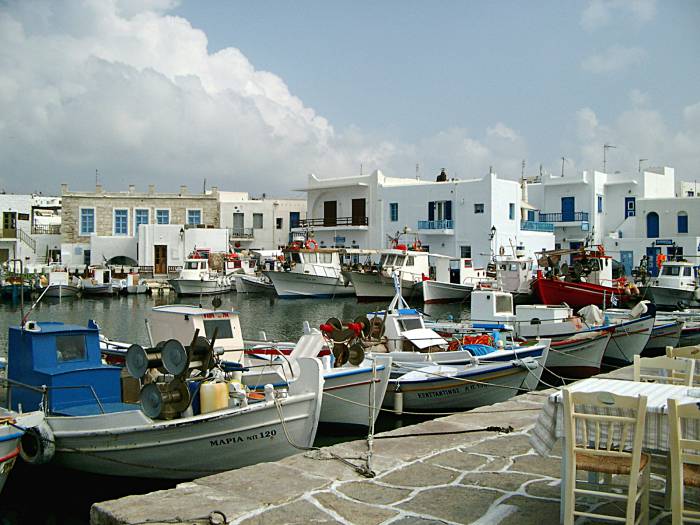 On the north side of the island is the bay of Naoussa which is built around a tiny picturesque port,  where little colourful fishing boats, called caiques, moor and remains of a Venetian castle can still be seen. Little taverns and ouzeries  line the port, giving a traditional atmosphere. We were fascinated to see how the  owners hung their octopus outside their taverns in the full sun to tenderise the meat! 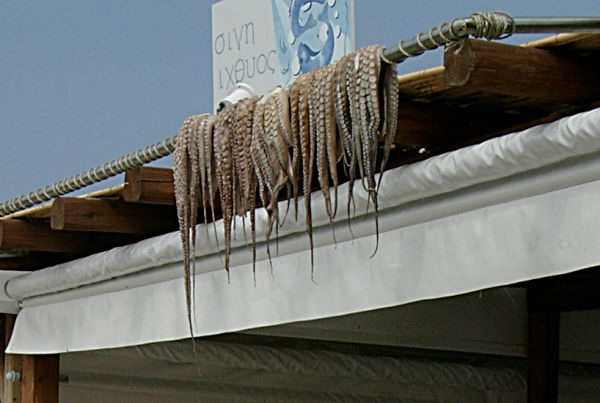 Not far from Naoussa is the bay of Agios Ioannis with the Monastiri beach, so named for the monastery that gives its name to the bay. The rocky outcrops and clear, shallow waters are supposed to provide excellent opportunity for snorkelling, but we passed up on it as the day was too cold. 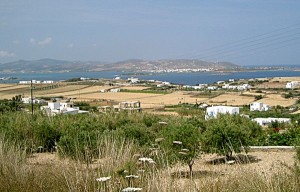 Another cute fishing village we stopped at was called Píso Livárdi. This village has been developed as a holiday resort with many popular restaurants and cafes located on the waterfront. From the port, daily trips to Naxos and other nearby islands are available. As we rode around the eastern side of the island we had good views of Naxos only about 5 -10km away. 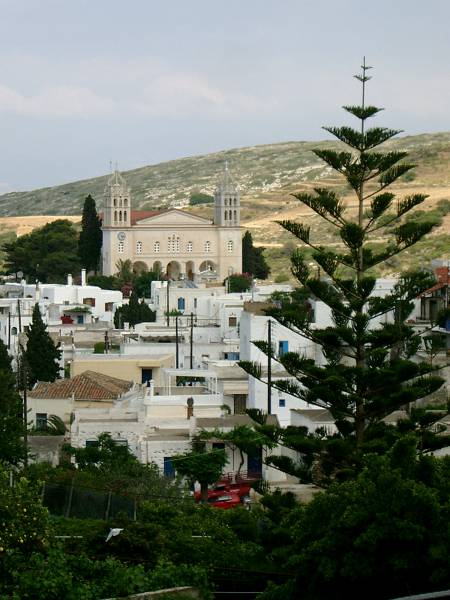 Lefkes is an inland mountain village 10 km away from Parikia. It is a picturesque village with narrow streets, still untouched by mass tourism, which helps it maintain its authenticity. The Byzantine Church of Agia Triada (Holy Trinity) is the village’s main church, made of the local fine, white marble.

Parian marble, which is white and translucent with a coarse grain and a very beautiful texture, was, in ancient times, the chief source of wealth for the island. The quarries, which we saw near Marathi on the way back to Parikia, were in operation from the 3rd millennium BC up to the 19th century. The marble from here was used to create some of the greatest ancient masterpieces, including the Aphrodite of Milos, Hermes of Praxiteles, Victory of Samothrace, many temples on Delos Island, and later, Napoleon’s Tomb.

One of our favourite hangouts in Parikia was Distrato Cafe. It was where we rested from our travels and had afternoon cake and coffees. The quality of the food at Taverna H Moira and Noufaro Restaurant was very good, the former providing traditional Greek cuisine while the latter had great seafood. And I had never seen so many stray cats as on this island, particularly around cafe tables, where they are tolerated, even protected.

We really enjoyed our brief stay on Paros. The scenery was more lush than on the previous two islands and the pace of life much slower than Mykonos or, as we soon discovered, Ios or Santorini.