Athens – The beginning of our Greek Odyssey 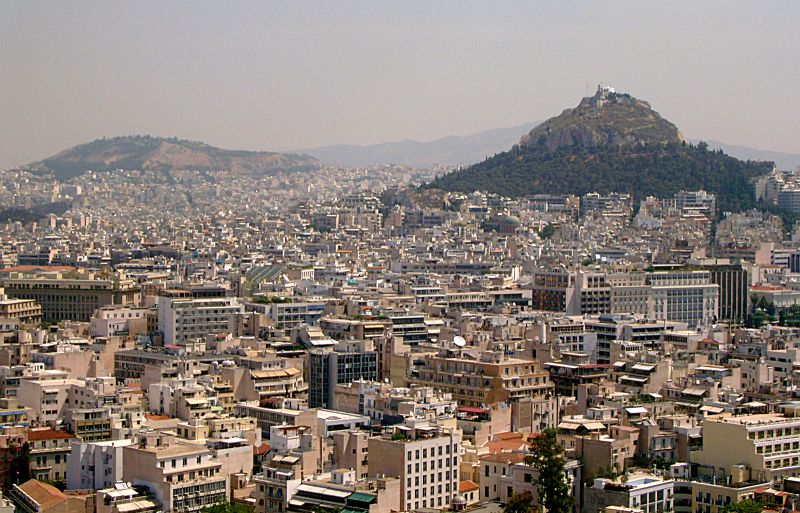 I don’t know why, but Athens was not anything like I expected. The taxi ride from the Eleftherios Venizelos airport was hair-raising as the driver sped towards our hotel. The scenery that whizzed by seemed to consist of kilometres of white buildings crammed tightly and glaringly bright in the sunlight. We got a better view of it the next day on our half-day bus tour with Chat Tours, when we looked across from the Acropolis to Mt Lycabettus, a 300m high hill with a little white church on top. 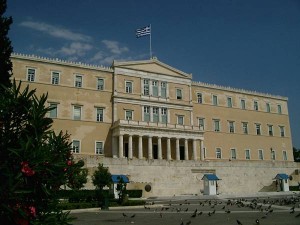 Hotel Arethusa, chosen for us by the tour company, was a little old and tired but it was very well situated near Syntagma square, the Hellenic parliament building and only a short walk to the Plaka. We were tired as well, but determined to walk off the jet lag, so headed out along Mitropoleos Street towards Monastiraki square. Many of the shops along the route were closed or quite seedy. 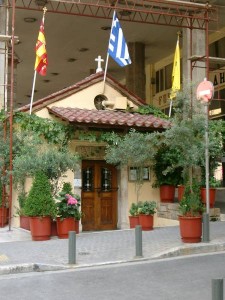 What did fascinate us were the numbers of churches we kept finding, even one little  one completely “overgrown”  – the Agia Dynami church has been built over by the Ministry of Education building! The ancient Agora was also very interesting to me, as a former student and teacher of Greek History. 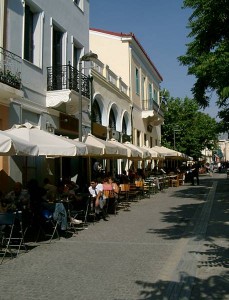 The shopping areas of the Plaka catered well to the tourist and we were surprised that the shops stayed open quite late.We stopped for dinner in one of the many restaurants there with outside tables with views of the Acropolis in the setting sun. Greek food is very familiar to us as Melbourne has the highest number of Greeks outside Athens and many great Greek restaurants.  We dined on mezethes, mixed souvlaki and zaganaki just like we would at home! Even the local light red wine – Agiorgitiko – was quite good for the price. 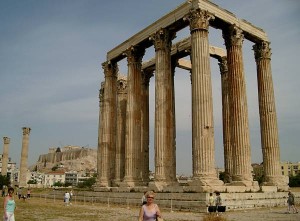 Our half-day tour of Athens took us first to the Temple of the Olympian Zeus, followed by a look at the Panathinaiko Stadium of the first modern Olympics. 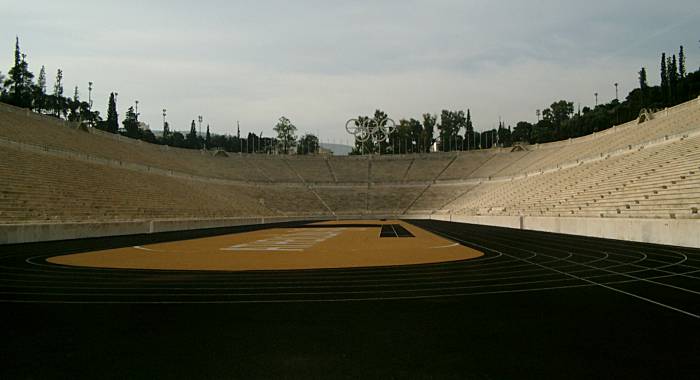 Then past Hadrian’s Arch, through the wealthy suburb of Kolonaki where we saw the residence of the Prime Minister with his guards in traditional skirted uniform, till we finally ended up at the Acropolis. All that white marble in the midday sun made it very bright and hot. But I was in my element poking around the various ruins, especially the Erechtheion and the Parthenon, even though the latter was partially covered in scaffolding. 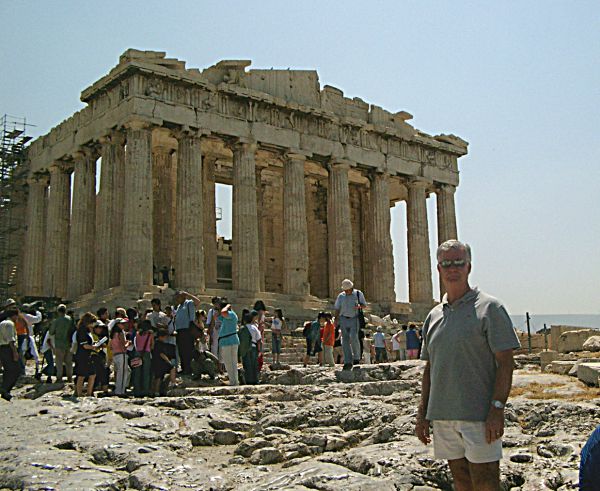 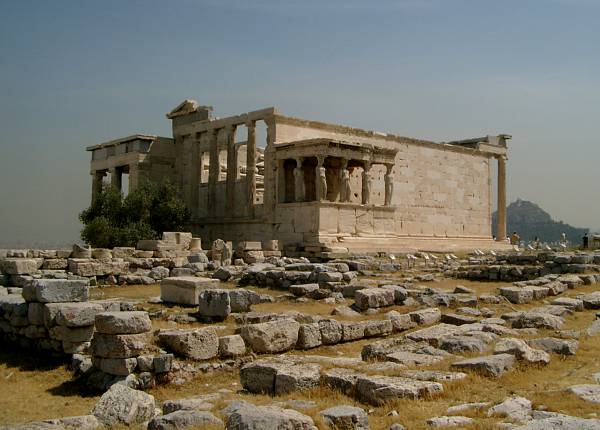 On the way back to the hotel we got dropped off 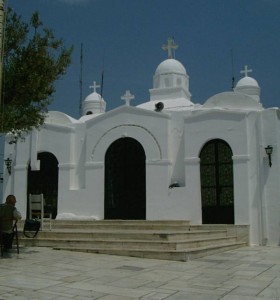 at the base of Mt Lycabettos and walked up to catch the funicular railway to the top. There we had magnificent views of Athens as well as a cute chapel of St George to photograph. The nearby restaurant was the perfect place to stop for a late lunch and enjoy the view while drinking the coffee frappe that is so popular there. The walk back from the funicular station to the hotel was quite long but mainly downhill. My legs were really aching from all the walking we had been doing. 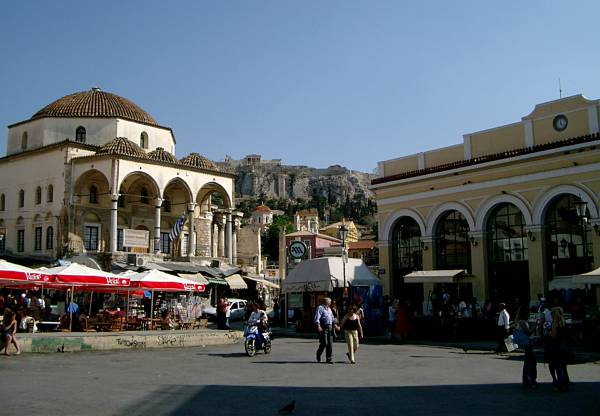 Our island-hopping tour of the Aegean islands known as the Cyclades began next day with a very early morning train trip from Monastiraki station to Piraeus port. It was a very cheap train fare and the station exit brought us out right opposite the ferries. We had been meant to travel on a hydrofoil but the meltemi winds had sprung up and the service was cancelled. Our replacement ferry was a huge one which took all sorts of vehicles underneath, and was divided upstairs into economy and first class. Because we had been bumped off the hydrofoil the shipping line gave us first class tickets, so we had the lounge at the front of the ship virtually to ourselves, complete with lay-back couches and great views of the ocean ahead. 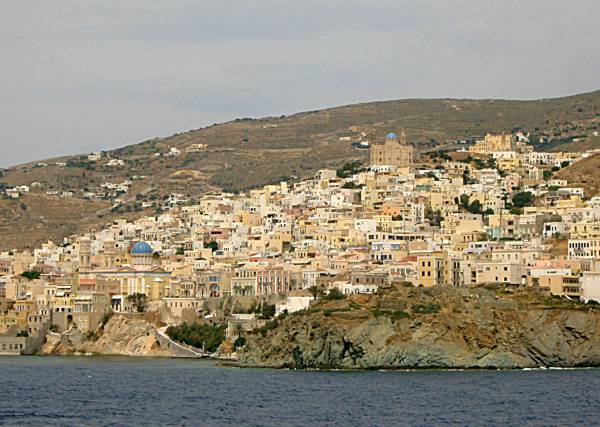 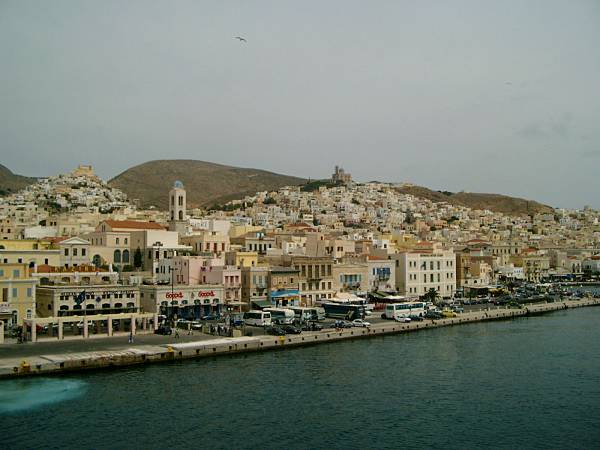 The 5 hour trip to Mykonos went via the islands of Tinos and Syros, where some passengers disembarked and vendors came on board selling sweet soft nougat in discs of wafers. We could only take photos of the islands as there was no time to get off and explore. Our ferry finally berthed at Mykonos about 1pm for us to begin the next step of our adventure.