Izmir is a very smart western city, the third biggest in Turkey, hugging the Gulf of Izmir on the Aegean coast of Turkey. Formerly known as Smyrna in ancient times, it gained power and prosperity through its trading port. Following the defeat of the Ottoman Empire in 1918 the city housed more Greeks than Turks, but with its recapture during the Greco-Turkish War (1919-1922) and a disastrous fire that broke out some days later, most of the Greeks were either killed or evacuated back to Greece. Subsequent rebuilding and land reforms are responsible for the modern development of the city.

In tourism terms, Izmir is best known as a jumping off point for the exploration of the fantastic UNESCO World Heritage site of Ephesus (Efes). Over many centuries this city had many incarnations under the rule of Cimmerians, Lydians, Ionian Greeks, Persians and later Romans, under whom it is thought to have been second only to Rome in size and importance.

The city was famed for the Temple of Artemis (Diana), the Library of Celsus, and a Theatre which was capable of holding 25,000 spectators. Believed to have been the largest outdoor theatre in the ancient world, it was used initially for plays but later for gladiatorial competitions. In fact a gladiators’ cemetery has been found within the complex. Ephesus contains the largest collection of Roman ruins in the eastern Mediterranean although it is estimated that only 15% has been excavated as yet. The Temple of Artemis has virtually disappeared, with artefacts going to museums in London and Istanbul.

The Library, originally built in 125AD, has had its facade painstakingly rebuilt from original pieces and is recognisable worldwide as the symbol of Ephesus. Ephesus also had Temples to the Emperors Domitian and Hadrian, the latter of which has been partially restored, a smaller Odeon or theatre for plays, several bathhouses, very advanced aqueducts and water mills. 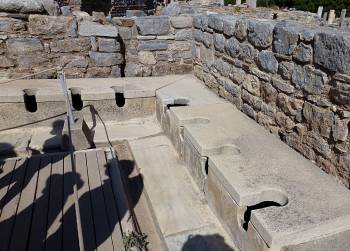 There is also a quite fascinating latrine system – a place to chat with friends while letting nature take its course!

Despite being destroyed by the Goths in 263 AD, much of the city was rebuilt by Emperor Constantine. However an earthquake partially destroyed it again and then it was sacked by the Arabs in the 7th and 8th Centuries AD. The importance of Ephesus as a commercial centre declined as the harbour was slowly silted up, leaving the former port about 5km inland. The city was completely abandoned by the 15th Century.

Ephesus was an important centre for Early Christianity from the AD 50s. The apostles Paul and John are believed to have lived and preached there. Paul wrote his First Letter to the Corinthians there, and it is thought that John wrote his Gospel there as well. A basilica dedicated to him was built in the 6th Century AD in nearby Selçuk and his tomb can be seen there.

Legend also has it that Mary, mother of Jesus, lived nearby. The House of the Virgin Mary is a popular place of pilgrimage for Christians and Turkish Muslims alike. The house was much smaller than we had expected and there were long queues to get in, which were kept moving at a fast pace. It has been restored and now serves as a small chapel.

There is also a “wishing wall”, where visitors leave prayers of intercession written on whatever paper they can scrounge, poked into crevices in the wall. A spring provides “holy” water for the faithful. There is also a baptismal pool, now empty. 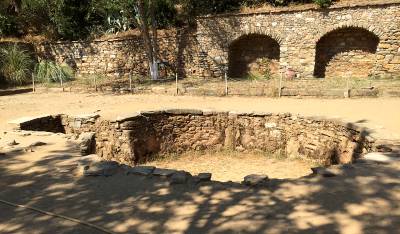