The Pyrenees wine region story continues with a common thread developing in the tale – that of family run businesses with a strong feeling for the land and a desire to pursue wine making with traditional techniques and little modern interference. The vineyards have little irrigation, few pesticides are used, vines are hand pruned, grapes are hand picked and wine making methods include open vat fermentation, basket pressing, hand plunging and barrel maturation. 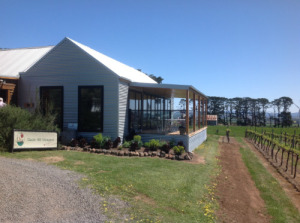 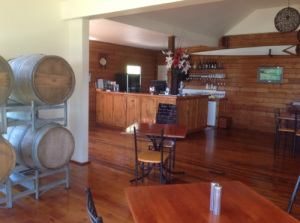 Quoin Hill Vineyard, Waubra, between Lexton and Learmonth on the way back to Melbourne, is the southernmost vineyard in the Pyrenees region. Established in 1977, with its first vintage in 2001, this is a small family run winery producing  five varieties from eight acres of vines – Shiraz, Chardonnay, Pinot Noir, Pinot Grigio and Tempranillo. The tasting centre and cafe are in a restored farm building with the new sundeck affording lovely views over the vineyard and the amazing wind farm on the opposing hills. The cafe serves light lunches and gourmet platters on weekends and public holidays and also caters for special events. We savoured the tasty Beef and Shiraz pies while we enjoyed the views. 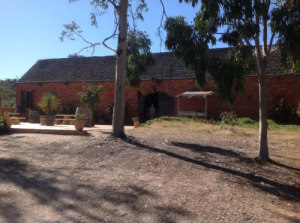 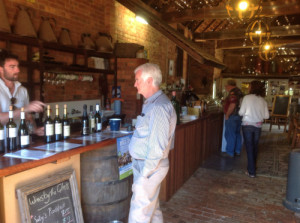 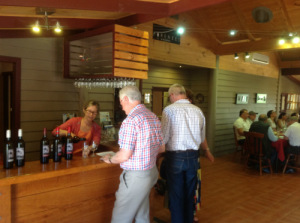 St Ignatius Vineyard, just south of Avoca, was established by an Argentinian couple in 1992 and now includes their three sons in the family business. Shiraz, Cabernet Sauvignon and Chardonnay are the primary grapes grown, but also Malbec and a new varietal to Australia – Torrontes. We certainly enjoyed the 2010 Cabernet Sauvignon.  To complement the cellar door,  the family offers a traditional Argentinian charcoal grill. There was a group booked in while we were tasting the wines and the food smelled amazing. 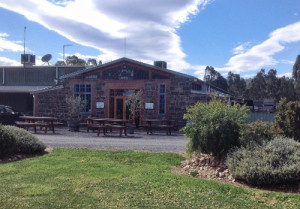 Summerfield Winery is another family (father and son) business established in 1970, with cellar door and new gourmet deli as well as accommodation, right in the heart of Moonambel.  James Halliday, Australian wine critic, rates Summerfield as one of Australia’s top Five Star wineries. In fact, in the cellar door there is a list proudly displayed of their vintages and his ratings of each 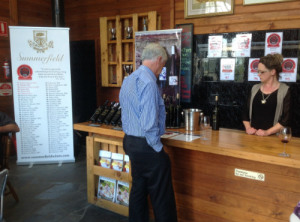 which consistently gain marks in the 90 to 96 range. There are two ranges of wines – the Summerfield classic range and the Family Series, available only to cellar club members. The Summerfield reds are full-bodied and have won many Australian and International awards over the years. We have also been buying these wines for years and this year our favourite was the 2012 Cabernet Sauvignon with its well ripened black currant nose and soft tannins. It should cellar for at least ten years. 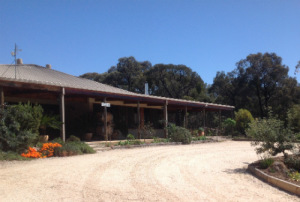 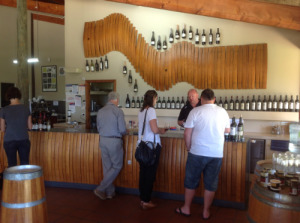 Taltarni, in a departure from the small family run business trend, is part of a global family empire.  It is one of the founding wineries of the Pyrenees region, established in 1969 and then bought by John Goelet in 1972. The Goelet family not only own Taltarni, but own Clover Hill in Tasmania, Clos Du Val in the Napa Valley and Domaine de Nizas in the Languedoc region of France. Unfortunately for us, the US and French wines were not on tasting, (except for the special release of the Domaine de Nizas Rosé – which we then bought) although with the cellar door wine list being so huge, I doubt we could have managed them anyway.  The French inspired sparkling wines are Taltarni’s flagship wines. The Taché with its soft pink tint would have to be one of Australia’s best known sparkling wines and in fact, the 2010 vintage won Silver at the International Wine & Spirits Competition in 2013. As well as the classic Taltarni label, the vineyard also produces the T Series, a fresh and ready to drink style. The T Series NV Brut was my favourite while Hubby preferred the Clover Hill NV Cuvée as it was drier. The 2013 Taltarni Sangiovese Rosé was a little drier than the French style made from Grenache and was Hubby’s preferred option again, while the 2010 Estate Shiraz and the 2008 Reserve Shiraz Cabernet appealed to us both as the best of the reds.

The Warrenmang Vineyard and Resort deserves a post all of its own to round off this review of the Pyrenees Wine Region.