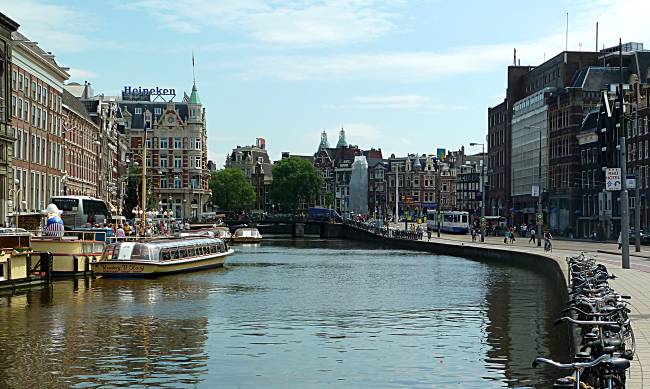 It wasn’t meant to be a stopover. We were expecting to simply change planes in Amsterdam on our way from Madrid to the planned stopover in Kuala Lumpur, before flying home to Melbourne. However flight delays meant we missed our connection and found ourselves, at midnight, in the nearly empty Schiphol airport. Coldly efficient KLM staff gave us virtually unredeemable food vouchers as compensation, then re-booked us on a flight for the next afternoon to Heathrow where we would then board a flight to KL. It was left to us to find and pay for our own accommodation. 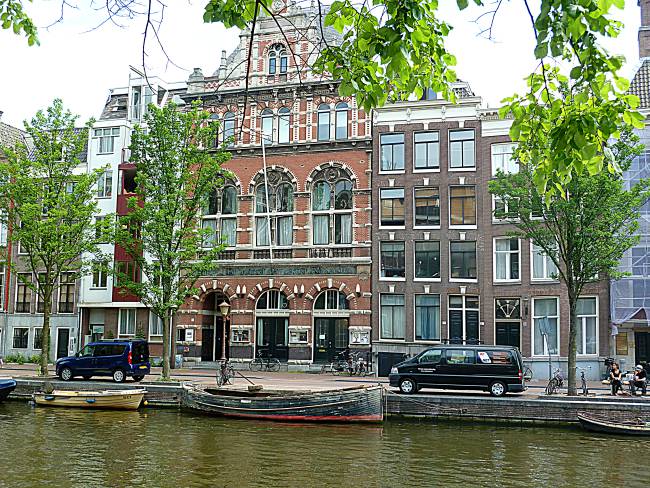 Looking up a modest little hotel in the city centre on the internet, we made the booking and then headed in by train and tram. When we got there the place was locked and dark. Fortunately for us, while we stood wondering what to do, the chef arrived from his late night out, rang the manager and arranged to let us in to a room. It was a cute little hotel squeezed in to a row of terraced houses, with the steepest set of stairs I had ever seen. It made getting our suitcases up to the room a logistical battle – I had to virtually push each case above my head while hubby pulled at them from above! 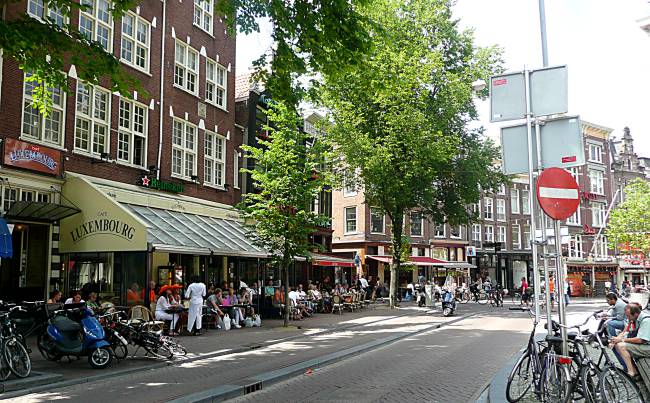 Now even though it was very late, we had developed an appetite and were curious to look around the area for a café. The only place we found open nearby served pizza and while we waited, we watched an old Australian soapie with Dutch sub-titles on the shop’s TV!

Next morning the excitement of having the best part of a day to explore Amsterdam, the capital of the Netherlands, completely wiped away our feelings of dismay at our “bad luck”. The location of our hotel was so central it made sightseeing easy. We were struck by the numbers of cyclists and the size of the multi-storey bike park near Centraal Station, which itself was one of the grandest we had seen on our travels. It is said that there are more bikes in Amsterdam than residents! 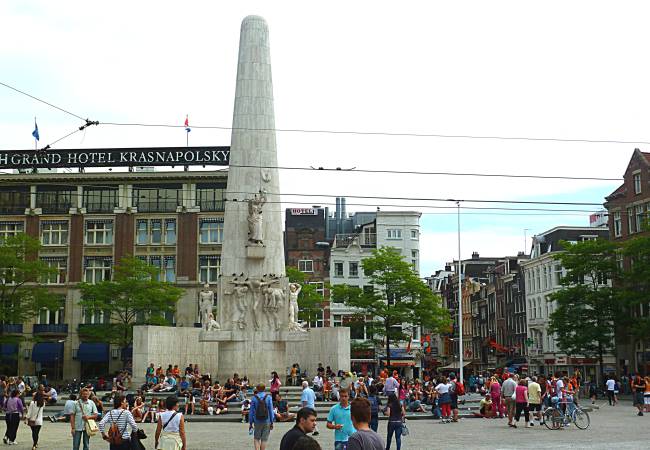 At the heart of the city is Dam Square. so named for the former  dam on the Amstel River at this location, hence also the name of the city. This tourist zone is bordered by the neo-classical Royal Palace, the Gothic Nieuwe Kerk (the New Church), Madame Tussaud’s wax museum, a grand hotel and a century-old department store. The focal point is the National Monument (1956), honouring the lives lost in WWII. 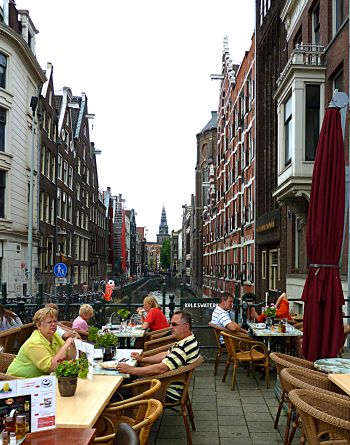 The oldest part of this city is De Wallen, known to tourists as the Red Light District. The neighbourhood is full of interesting shops, pubs, restaurants, leaning gabled houses, exhibition spaces, and studios for clothing, shoe and street wear designers. Amsterdam’s tolerance of prostitution effectively provides security to this oldest profession, which enjoys police protection and union support. 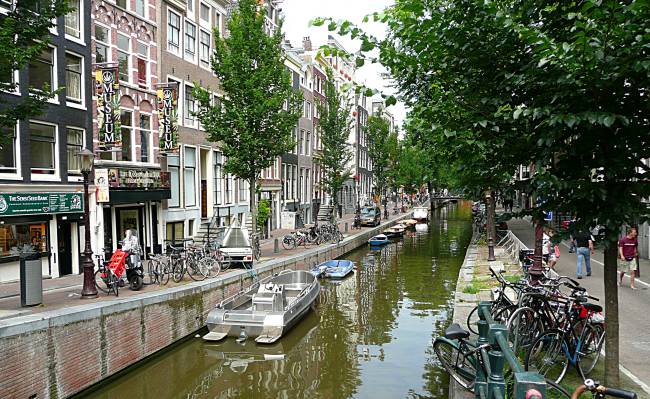 Amsterdam’s Canal Ring of 17th century canals entwines the city streets, passing under little bridges which afford lovely views of the  canal boats and the homes, shops and cafes that border the canals. 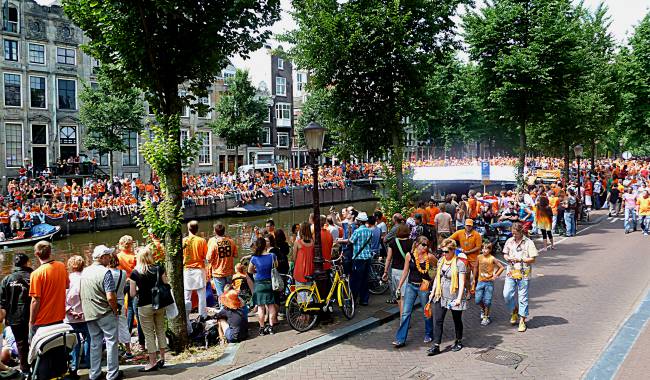 Originally designed to drain the land, the canals evolved into the trademark of the city and were awarded the UNESCO World Heritage Site status in 2010. Festivities are held on or alongside the canals, such as the King’s Day parade and welcome parades for returning victorious football teams. On the day we were there, the streets were awash with patriotic football supporters wearing the Dutch national colour. 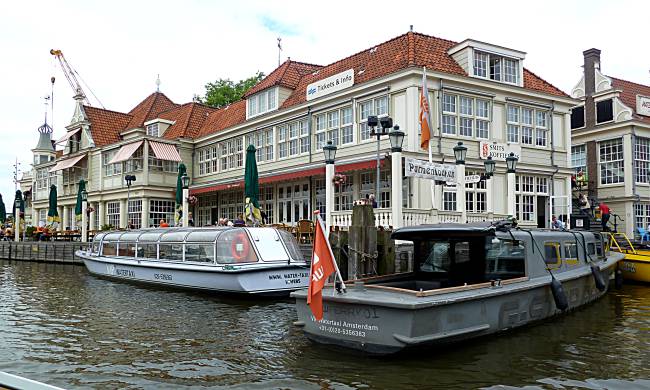 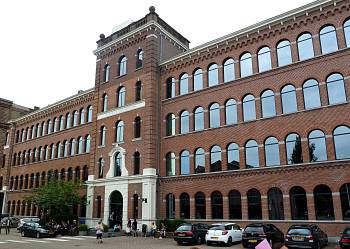 Canal cruises are one of the most popular tourist attractions. We took a half day tour which included a stop at one of the other well-known Dutch attractions – Gassan Diamonds. Here we were taken on a tour of the factory and were fascinated to watch craftsmen sorting and cutting diamonds. Unfortunately no samples available here! The gift shop also displayed a range of the famous blue and white Delft pottery, so I made sure to buy a souvenir vase, since the actual pottery is some distance away and we would not have time to go there. 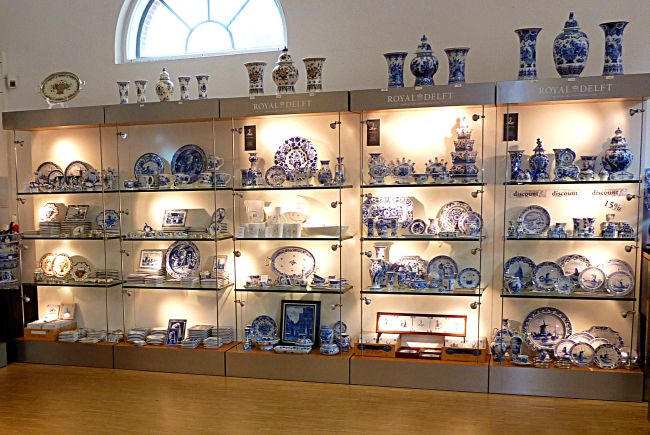 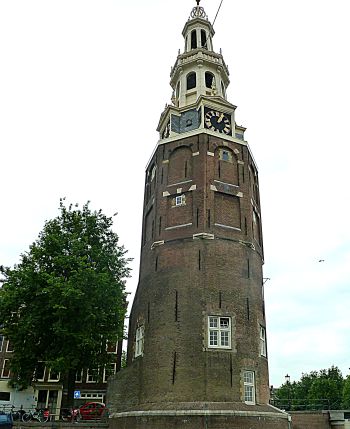 The cruise also took us past the Munttoren (Mint clocktower) on Muntplein Square, where the Amstel river and the Singel canal meet. This had once been one of two towers at the gates of the medieval city wall. It gets its name from the Mint that was temporarily housed in the guard house next door. Above the four clock faces is a carillon of 38 bells which chime at the quarter hour.

Out through the main entrance to the canal system, we were impressed with the NEMO Science Museum whose ship-like building dominates the Amsterdam old harbor with its replica sailing ship in front. 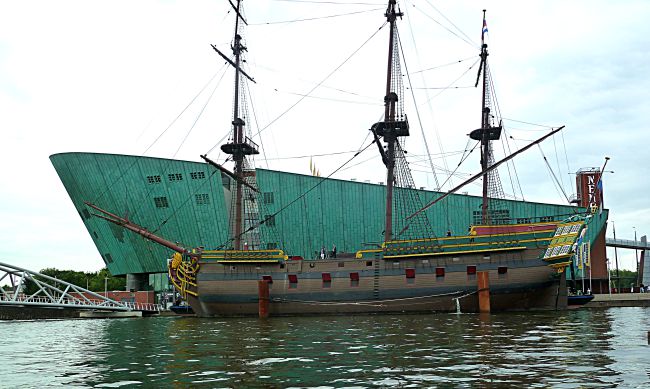 The brevity of our stay in Amsterdam meant we were unable to visit the various museums and galleries the city is famous for, but our wanderings, the canal cruise and several tram rides gave us an orientation and a taste or more in the future.

Sadly, it was then off back to the airport for our flight to Heathrow and several hours wait there before boarding the next flight to Kuala Lumpur. Our planned stopover there was now reduced to one and a half days, but we were secretly glad it had happened. Our brief stay in Amsterdam had been lovely and we vowed to come back one day and do it justice.