Chongqing – Gateway to the Yangtze

We arrived in Chongqing too late in the day to do much sightseeing, though we did manage to get a good look at it from the air and on the journey from the airport. What we saw blew us away! The urban area of the city is densely packed with high-rise buildings housing about 8 million people. The entire Chongqing administrative district (the largest in China) contains about 32 million people – twelve million more than the whole of Australia! Part of the reason for its growth lies in its position at the junction of the Yangtze and Jialing rivers, making it a major manufacturing and transport hub. For us particularly, it was the starting point for the Yangtze River cruise which we were about to enjoy. Its size and importance in such a mountainous area and being so far inland made it the obvious choice for the provisional capital of China during WWII, because it was less accessible to enemy attack. The other reason for its size lies with the program initiated during the Qin Dynasty of encouraging immigration from surrounding provinces. And more recently, as a result of the construction of the Three Gorges Dam further downstream, many people were relocated to the city to escape the higher water levels.

Before boarding the ship we had time for a visit to the Huguang Assembly Hall. This is the general name for a whole group of buildings representing the architectural styles of the areas the immigrants came from. The main attractions are the Yu Palace and the Immigration Museum. 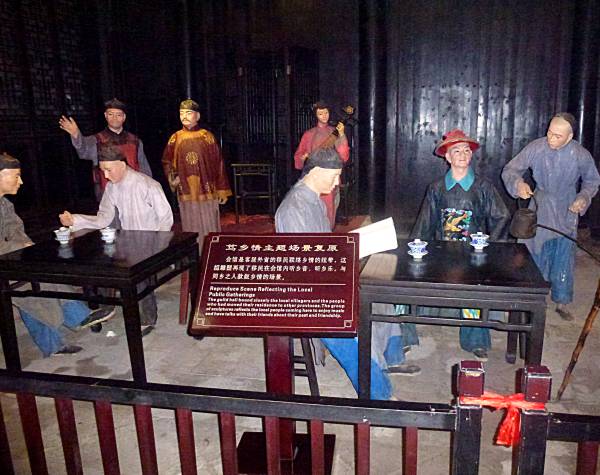 There are rooms filled with artwork and furniture, montages of figures to represent the life of immigrants in the past, a temple, a teahouse, a gift shop and several stages for Chinese opera performances.

Chongqing is known for its hot and humid weather, with very poor air quality. Due to its massive amounts of smog, Chongqing has been ranked as one of the most polluted cities in the world. As we looked across the river from the port we could faintly see the Chaotianmen Bridge, built in 2009 as the world’s longest arch bridge, which reminded us of the Sydney Harbour Bridge. To further the Sydney allusion, the other major focal point on the confluence of the two rivers is the amazing looking Grand Theatre, completed in 2009. The huge building contains two auditoriums and resembles a mix between the Sydney Opera House and cruise ship – if that is possible!

Because Chongqing is built right on the side of a mountain, accessing our cruise ship was an interesting manoeuvre. Small groups of tourists and their baggage were loaded into carriages on steep rail tracks which allowed them to slowly slide down the gradient until level with the dock.

We were then welcomed aboard by two dancing red dragons!

At night the port area of Chongqing is a fairyland of city lights and the display from the various ships coming and going. The sail-away was one of the most spectacular we have seen.