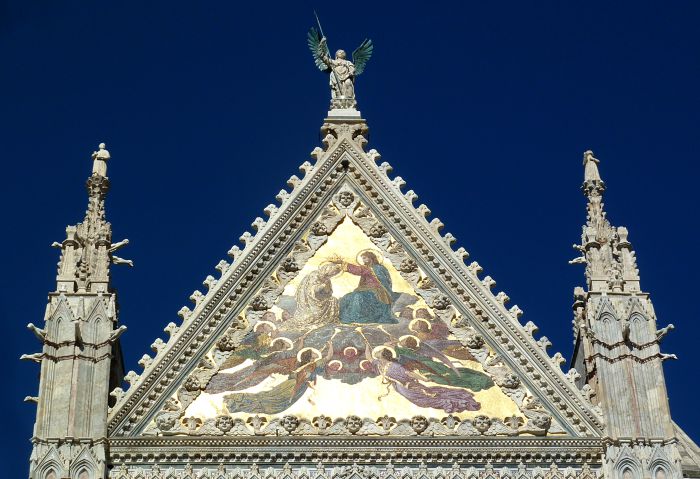 Famous for its cuisine, art, museums, medieval cityscape and the Palio (a horse race held twice a year), the historic centre of Siena has been declared by UNESCO a World Heritage Site. This Etruscan, and later Roman, town flourished from the 8th century as a stopping point on the trading route between Rome and Florence. Siena is also the capital of its own province and one of the chief cities in the region of Tuscany. The Duomo and the shell-shaped Piazza del Campo are the main attractions. This walled city is situated on three hills and is closed to traffic, so unlike other small hill towns, there is quite a bit of walking to do if you want to see more than the main attractions. 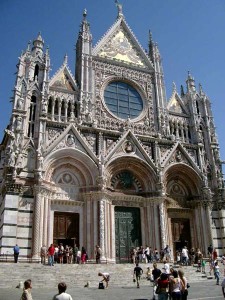 The Duomo, or Cathedral of Santa Maria Assunta (Our Lady of the Assumption), is one of the most outstanding examples of a Romanesque-Gothic church in Italy. Decorated inside and out with white and dark green (almost black) marble, it reflects the colors of the city of Siena. Inside are works by famous artists like Michaelangelo and Donatello and a fabulous floor decorated with scenes engraved and carved in marble.

Made of Carrara marble, the huge pulpit is the earliest remaining work in the cathedral, sculpted by Nicola Pisano and others in about 1265-8. 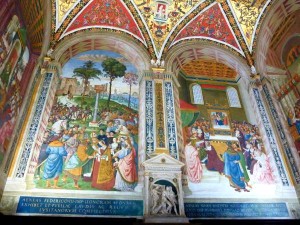 To one side, the Piccolomini Library has striking frescoes on its wall and ceilings depicting the life of Pope Pius II,  painted by Pinturicchio and his pupils. The library was originally intended to conserve the rich collection of manuscripts Pius II had collected, but only a few are on display.

The Piazza del Campo is a big concave shell. The paving is made of red bricks arranged in fishbone style, divided into nine gored sections by strips of travertine marble radiating out from in front of the Palazzo Pubblico. At the north-west edge is the white marble Fonte Gaia. The Campo is dominated by its Palazzo Pubblico (Town Hall) and the Torre del Mangia. The Palazzo is made of brick and marble and houses the Civic Museum with several masterpieces of Sienese artists. 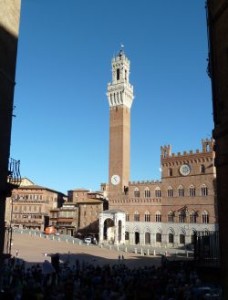 Around the perimeter of the Campo are former palazzi of the wealthy, now masked at street level by dozens of cafes and restaurants making this area perfect for the evening passegiata. Apart from the Palio, the Campo is used for large scale performances, such as the concert that was televised from there the night before our first visit, thus explaining all the staging and chairs that cluttered our view in the photo.

The Torre del Mangia, at a height of 88 metres, offers one of the most beautiful views of the city if you care to climb the distance – we didn’t! 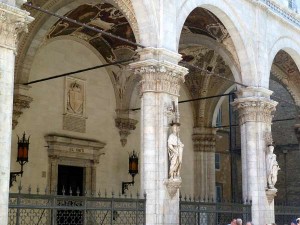 Another interesting building is the Loggia della Mercanzia, built in 1417, as the meeting place of Siena’s merchants and money lenders. Statues of St Peter and St Paul, as well as the city’s patron saints, adorn the columns.

The Basilica of San Domenico dominates the view to the north west, an austere church first established in the 13th century and enlarged in the 14th century. Below, the Fountain of Fontebranda, the oldest cistern in the city, supplied drinking and washing water for the people of Siena. 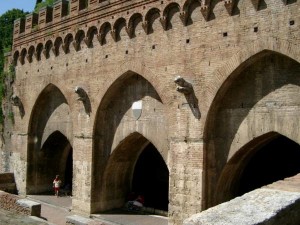 St Catherine of Siena lived nearby and her father’s cloth dyeing business relied upon that supply. Her house was converted into a Sanctuary in 1464 and today contains a number of documents and paintings related to her. 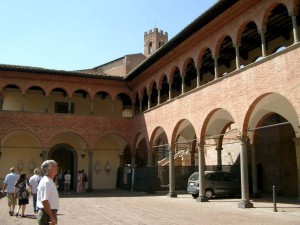 While walking around the streets of the town we happened upon an interesting window display in an enoteca. I had to include it here. Naturally, since the Tuscan wines are so good, we had to sample the Vino Nobile de Montepulciano and the Brunello di Montalcino, both very good. 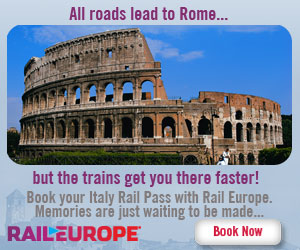