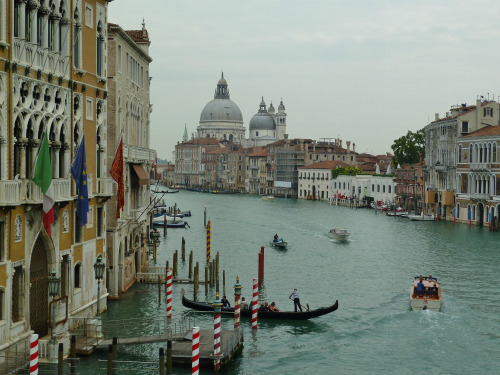 If you were to ask me which is my favourite city of all the places I’ve seen, I would be hard pressed to narrow it down to one. But high on the list would be Venice – La Serenissima – not least because it is a photographers delight. I have visited there twice, staying a week in 2003 and more recently a couple of days before the Adriatic cruise in October 2013.

Films, such as Death in Venice with Dirk Bogard, and books, such as ‘Journey from Venice’ by Ruth Cracknell, had conjured up an image that I was desperate to explore. We had never considered that we would be able to afford a decent hotel there, but thanks to our timeshare, we were able to spend a week at Palazzo del Giglio, a 4 star hotel overlooking the sunny and picturesque Piazza Santa Maria del Giglio and the beautiful Baroque church, Santa Maria del Giglio, right in the heart of Venice. It is 5 minutes walking distance from Piazza San Marco, a stone’s throw from vaporetto line 1 that passes through the Grand Canal, and one stop on the vaporetto from another wonderful Baroque church which contains paintings by Tintoretto and Titian – Santa Maria della Salute.

We had been driving in Italy until this point, fresh from our exploration of the Cinque Terre, but of course, you can’t take your car into Venice. We left it at a long term car park in Chioggia, an industial city at the south end of the lagoon,  took a water taxi across to Zattere, lugged our suitcases up and down a few flights of stairs over canals and then at Accademia took a short journey on the vaporetto to a little lane that led on to Piazza Santa Maria del Giglio. That was not the easiest arrival into a city, and it’s very easy to get lost there when you are new to the area.

Our map was quite small and there were frequent stops to examine it during our week in Venice. The little streets and lanes wind  erratically and there are many canals making a straightforward progression impossible. Even the directional signs are confusing as you can go in two completely different directions and still end up at the same destination! Last year we simply used our iPad with an Italian data SIM and Google Maps and it was all smooth sailing. Our arrival last year was by plane into Marco Polo Airport, then by airport bus to Piazzale Roma – the last point for road traffic – where we took the People Mover across to the passenger cruise dock. That was a breeze, thanks to the information provided by Tom’s Port Guides.

Because it is tiring walking through all those lanes, we found the easiest way to get around was to buy a  vaporetto pass to have unlimited rides up and down the Grand Canal as well as to visit some of the other islands. We saw the glass-making factories and shops of Murano and the riot of colour on the houses of Burano where they make lace, passed the little cemetery island of San Michele, and spent a day on the beach and walking around Lido. Here the beaches are mainly private,

restricted to hotel guests, but if you walk down the main street from the wharf past all the shops (after stocking up with picnic supplies) you will reach an area just to your left where you can get onto the beach for free. This island is famous for the Venice Film Festival.

The main island of Venice is divided into sestieri or neighbourhoods. The commercial heart of Venice, San Polo, includes the Rialto Bridge, and west of the bridge where the markets and many restaurants are. Another interesting area is known as Cannaregio, the northern section of the city, where we saw the remains of the Jewish Ghetto, where Jews were forced to live from the 16th to the 18th century.

It is obvious that conditions were cramped, particularly with the height of each floor being significantly less that the floors of neighbouring buildings. The southern part of Venice, Dorsoduro, has many open campos, wider streets and even trees, which are in short supply in other sestieri.  It houses much of the university, the former home of Peggy Guggenheim – today a world class modern art museum – as well as the Accademia Museum. 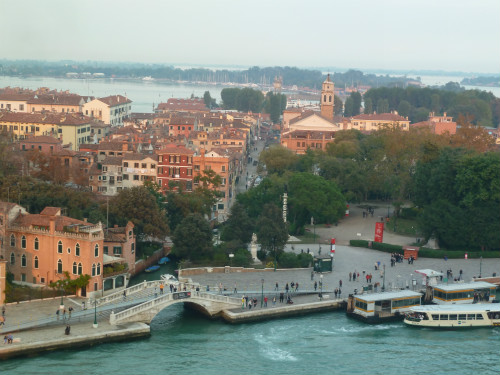 And if you are starved for some open garden areas, try getting off the vaporetto at Giardini. This area houses the Bienniale Art Exhibition and has many lovely areas for walking.

Of course the main attraction in Venice is the area around Piazza San Marco with the Palazzo Ducale (Doge’s Palace), the Basilica San Marco (St Mark’s Cathedral) and the Campanile (belltower). The streets that lead into the Piazza are full of restaurants, high end shops and souvenir shops selling all of the usual mementos like glass, lace, figurines and ceramic Rialto bridges, but also wonderful masks like those used during Carnevale. In the cloistered area around the square are more restaurants, some of which have tables and chairs out on the flagstones. At night three areas are set up for small groups of musicians who play classical and popular Italian pieces. But be wary –  once you sit down your little cup of espresso will suddenly cost big bucks as you are paying not only for the seating but for the musical cover charge!

Queueing for entry into the palace or the basilica can take forever, so it would be wise to check out the advance purchase options online. And make sure you are appropriately dressed for the basilica even in the heat of summer. Ladies cannot expose bare shoulders and no-one is allowed in wearing shorts unless they are below knee length. I was wearing a modest yet sleeveless top and had to cover myself with a length of lace I had just bought in the Rialto market, like a shawl.

The other classic touristic thing to do in Venice would have to be the Gondola ride. They are very expensive for a half hour tour, and may not be great value for money.  You make the call – we haven’t bothered. A cheap alternative is to take a traghetto ride across the Canal to the other side. They are available at several positions along the canal and save you having to walk to one of the two main bridges.

As I said at the beginning, Venice is heaven for photographers, particularly if you can gain the vantage points afforded by the Campanile or various tall buildings.

But by far the best viewpoint would have to be on the top deck of a cruise ship as it travels down the Giudecca canal on its way out into the lagoon. With Andrea Bocelli’s Time to Say Goodbye blaring out of the speaker system, we were glued to the railings and the views were fantastic, even as the light faded. It was like a great art performance that we could not tear ourselves away from. Feelings of excitement, about the vista in front of us as much as the cruise experiences to come, mingled with a real sadness at leaving such a wonderful city as Venice.