When cruise ships call in to Livorno, on Italy’s Tuscan coast, cruisers usually opt for the tours in to Florence, a most wonderful drawcard of a city. This is often combined with a detour to Pisa, the city of the Leaning Tower. Livorno cannot compete with these attractions, so is usually bypassed. Since we had been to both Pisa and Florence (twice) before, we booked a tour with Papillon Service, who were able to tailor a tour for a group of six of us to Lucca, one and a half hours to the north. This would include a side trip to seaside resort town Viareggio on our return.

Lucca has the reputation of being a very attractive city with its biggest claim to fame being the mediaeval walls that surround the town. It is also the birthplace of composer Giacomo Puccini (1858-1924), so productions featuring his music are frequently held. Tourism is a major source of income, so much that the city regulates who can lead tours there. Our driver, Ignazio, was only able to give us small amounts of

information on the way there and had to drop us off at Piazza Napoleone, just inside the city, to meet our registered Lucca guide, Carolina. From there we set off on foot, as the historical centre is an easy city to walk.

delle mura), popular with those who like to hire bikes to ride the 4km around the city. Around the walls are parklands and a moat like a crown, while the elevated aspect inward to the old city allow views into stately gardens and across to the many churches, towers and other significant buildings.

Ligurian tribes were the first to  inhabit this area which was then settled by the Etruscans and then made a Roman colony. Some signs of Roman habitation can still be found, chiefly some remains of the amphitheatre arches around what is now known as Piazza dell’Anfiteatro, which is ringed with cafes and restaurants and has been the venue for major concerts. But much of the Roman stonework was utilised in the construction of other buildings, such as the columns in churches like San Frediano. 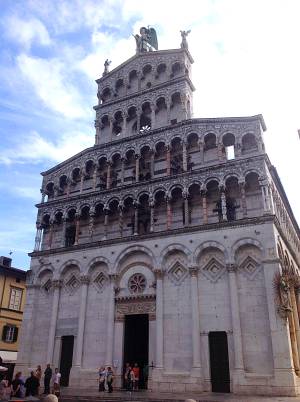 The church of San Michele in Foro was built on the original site of the Roman forum in Piazza San Michele, taking over three hundred years, starting in the 11th century. One of Lucca’s many architecturally significant churches, this Romanesque building displays a façade resembling a tiered wedding cake. The colonnades of white marble are inlaid with a menagerie of real and mythical animals with the figure of the archangel Michael slaying a dragon, at the top.

Another is the Basilica di San Frediano, which  attracts visitors with its gold Byzantine mosaic shimmering at the top of its broad façade. The ornate work of art symbolises the Ascension of Christ and features depictions of the Twelve Apostles beneath. 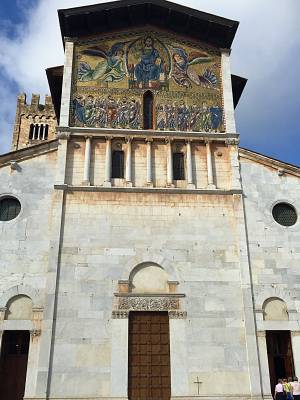 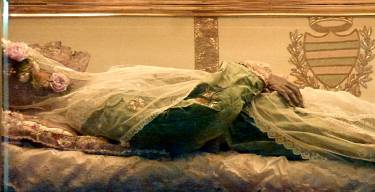 Inside, in a side chapel dedicated to St. Zita, is her mummified body displayed in a glass cabinet. A large ornately carved baptismal font from the 12th century is near the front door. The sculptures on the circular basin portray the biblical tale of Moses.

Reminiscent of the architecture of the city of San Gimignano,  Lucca possesses a number of extremely tall towers. The ruler of Lucca in the early 15th century, Paolo Guinigi, built next to his Palazzo a red brick tower 45 metres high, on top of which he planted out a garden with seven oak trees. The tower with some of the trees still remains and can be climbed if you are feeling energetic.

After the official part of the walking tour was over we had free time to wander and have lunch – at Pult  café in Via Fillungo, the main shopping street. Free wifi gave us a chance to catch up on emails, before we set out in search of the Duomo – Lucca’s Cattedrale di San Martino.

This church is predominantly Romanesque, started in the 11th century, although the interior was renovated in the 14th and 15th centuries with a Gothic influence. The pre-existing campanile ( bell tower) was incorporated into the construction.

Inside are works by famous artists, such as Tintoretto’s Last Supper, while the poignant marble sarcophagus of  Guinigi’s young wife, Ilaria del Carretto, bears the form of her faithful dog at her feet. The most revered sculpture is the Volto Santo (Holy Face) – a representation of Christ’s body, on the cross, once thought to have been carved by Nicodemus – which has been venerated since the Middle Ages and is is the focus of the festival of Santa Croce. It occupies a small octagonal tabernacle surrounded by an ornate golden screen. 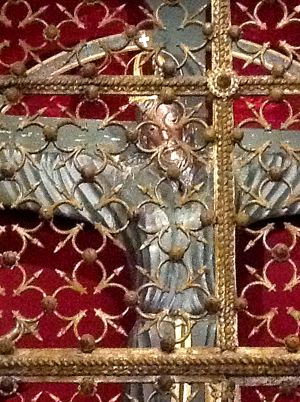 Back in the bus, we stopped briefly to get more photos of the famous walls, before heading westward to the coast and Viareggio.

Viareggio is the southernmost Italian Riviera style resort town on Italy’s Ligurian coast and the largest beach town in Tuscany. Until the 19th century it was little more than a fishing village, but with the draining of the malaria infesting marshes and the construction and expansion of the marina, the town became a valuable port link for Lucca.

The southern end of the town has several Liberty (Art Nouveau) style buildings due to the boom in tourism at the beginning of the 20th century when Viareggio really expanded as a resort town. There are several very grand hotels along the esplanade on the city side, such as the Grand Hotel Principe di Piemonte, while on the beach side a broad passeggiata  is lined with many shops, bars, cafes and restaurants. It is popular with the Lucchese as it provides more nightspots than their own city, and attracts lovers of water sports such as sailing, since the city is also renowned for its shipbuilding industry. Another attraction is the Villa Museo Puccini, the former residence of Puccini in Torre del Lago, nearby, which is also his mausoleum. 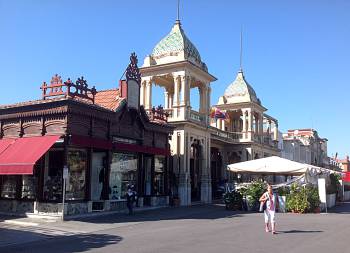 The beaches in town are privately owned although there is a free beach area in the southern part of the city. For a price at the private beach establishments, you get a beach chair and umbrella and use of facilities like changing rooms and restrooms. Since it was the end of the season, the town was very quiet and few people wandered the promenade save for a few tourists, many of the restaurants were closed and the beaches were practically deserted. 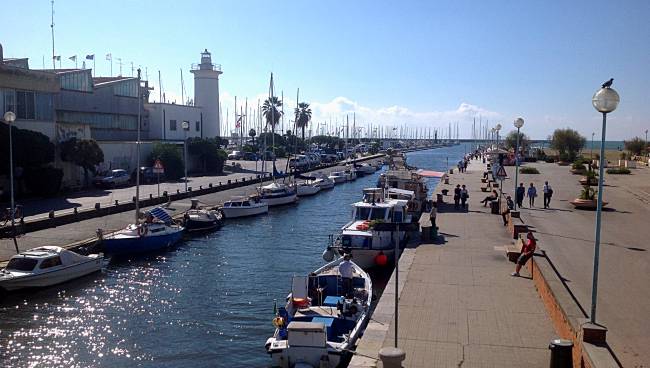 However we did manage to find a shop selling great gelati to enjoy while we rambled out along the Burlamacca canal to the pier and back. From here can be seen the now obsolete lighthouse, built about 1863 and now attached to the yacht club. Its marina was packed with hundreds of small sailboats.

Our cruise was now drawing to a close, but we had one more port to visit before returning to Barcelona – Monte Carlo, Monaco. We had been there by road before, but arriving into the magnificent harbour on a cruise ship was going to be something to really look forward to!