Ever wondered where this expression came from? Well, when we visited this beautiful city, 73km south of Madrid, we found the answer. As the seat of the Catholic Primate of Spain, Toledo held over 30 synods or councils from the 4th century to the 16th century, during which were laid down the foundations of Spanish ecclesiastical law. During the long lasting historical struggles for religious control of Spain, the city of Toledo had large communities of Muslims and Jews (until they were expelled throughout Spain in 1492 and 1502 respectively), allowing the construction of Cathedrals, churches, mosques and synagogues and for a period, allowing freedom of religious practice. Even after the re-conquest by the Catholic Kings, those buildings were maintained in good condition.  Its cultural, monumental and religious contribution to heritage led to Toledo being declared a UNESCO World Heritage Site in 1986. 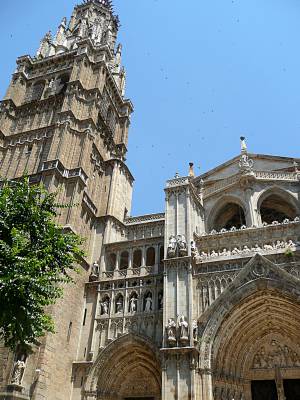 The Cathedral of Santa María de Toledo was begun in 1226 and largely completed by 1493, showcasing the best of the Gothic style of architecture. As with other cathedrals in Spain that were built over the place of former mosques, it has some Mudéjar elements still visible in the cloister. The bell tower was built to cover the minaret and the five naves occupy the space of the former prayer hall. 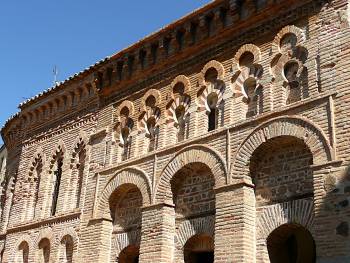 Other mosques in Toledo were very little altered when they were converted into Catholic churches, such as the Mosque of Christo de la Luz, which displays the typical arch work like that of the Mezquita in Córdoba.

There are also a couple of synagogues dating back to the 14th century which have been preserved. The unusually large El Tránsito Synagogue is the most important example of Spanish-Jewish art in existence. It was decorated with Mudéjar elements, beautiful geometric and floral motifs, and inscriptions in Arabic and Hebrew. It is now a Sephardic museum.

Another museum started life in Roman times as a palace and then underwent several restorations as a fortress or Alcázar, laid out in a square with towers at each corner. After the Spanish Civil War, where it played a famous role, it was again restored. Its style is mainly Renaissance and it now houses the regional library of Castilla-La Mancha as well as the Army Museum. 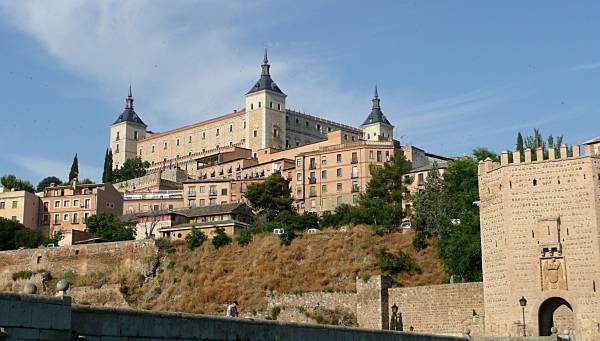 The city of Toledo occupies a rocky hilltop, traversed by narrow, winding streets, with steep gradients and rough surfaces, making driving within its walls it almost impossible and walking very tiring. At its centre is the Plaza del Zocodover. This is the main square, close to the Alcázar and the Cathedral, so a good place to rest and take a snack. It was created on the site of an old cattle market and has been the place for fiestas, bullfights and even executions over the centuries. 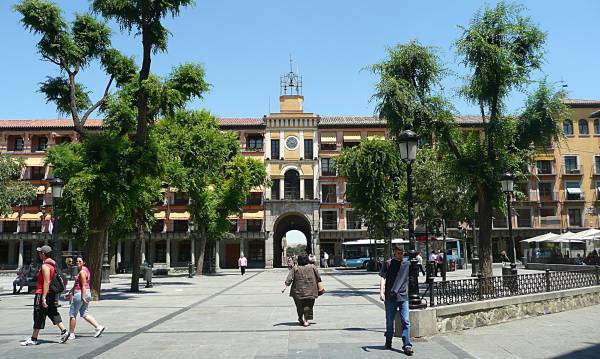 Walking around the various shops and looking for suitable souvenirs, we noticed quite an unusual specialty – swords, knives and medieval armory. As this type of souvenir might be difficult to transport home, we settled for more a demure local craft – embroidery.

The city also displays a love of Miguel de Cervantes and his hero Don Quixote. Statues of either can be found in various places. Toledo is the capital of the Castilla-La Mancha region, so we were keen to see the famous landscape of La Mancha depicted in Cervantes’ novel. As we were also keen to call in to some wineries to the east of Toledo, we decided to drive via Consuegra as we made our way towards the coast. Along a high ridge above the town stand 12 windmills, built in the 16th century to grind wheat into flour, and a Medieval castle. From this viewpoint the landscape of La Mancha spreads out as an arid yet fertile plateau. 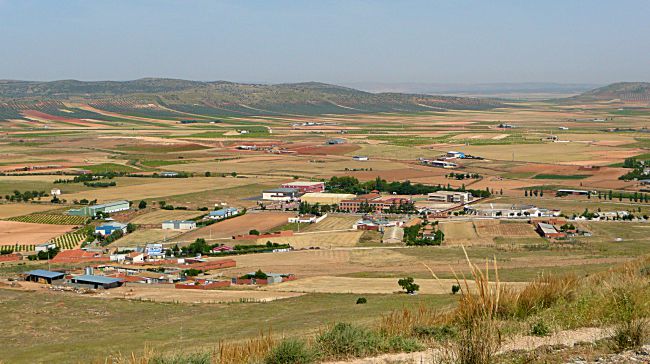 A long drive to the coast and Alicante now lay before us. Tomorrow would be the feast of San Juan and we were looking forward to the spectacular festivities and bonfires.