Umbria is referred to as il cuore verde d’Italia (the green heart of Italy). It is the only Italian region having neither a coastline nor a border with other countries. It is characterized by hills and historical towns such as Assisi (a World Heritage Site associated with St. Francis of Assisi), Orvieto and the capital, Perugia. With Assisi as our base, we planned to spend a week exploring this unique region. Luckily for us, there was a timeshare resort we could use just 15 minutes out of the town itself.

Assisi, in central Umbria,  is a walled hilltop town. Formerly a Roman town, remains of their occupation can still be found in its city walls, the forum (now Piazza del Comune), a theatre, an amphitheatre, a villa and the Temple of Minerva (now transformed into the Church of Santa Maria sopra Minerva).

Now the site of pilgrimages made to any of seven saints associated with this town, Assisi is inextricably linked with St. Francis, the gentle, animal-loving saint who was born here and who later founded the Franciscan order. Thus the major attraction of the town is the Basilica of San Francesco, begun in 1228 and completed in 1253, in a mixture of Romanesque and Gothic styles.

There are actually two churches, an upper and a lower,

and a crypt where the remains of the saint are interred. The churches are decorated with frescoes by numerous late medieval painters, such as Giotto. We were fortunate to attend mass there and also to visit the crypt (and sneak a forbidden photo!)

Another church of note (among many in Assisi) is the Basilica of St Clare, dedicated to and containing the remains of Saint Clare of Assisi, a follower of Saint Francis and founder of the Order of Saint Clare, or the Poor Clares. I managed to get a photo of it in the distance, in the fading light.

The Portico del Monte Frumentario is an especially impressive building with a series of stone arches. It is a distinctive landmark on the hilltop as you approach Assisi. Further up Mount Subasio are two medieval castles, the larger called Rocca Maggiore, from where you can get great views over the landscape below. 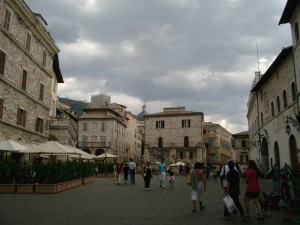 Other Assisi highlights include the town hall square, Piazza del Comune, with its Palazzo del Capitano del Popolo, the crenellated Palazzo dei Priori, the Lion’s fountain and the clock tower.

In order to preserve the town and also because many of the cobbled streets are narrow, the commune actively dissuades car access except for residents. There are car parks outside the town for visitors, who then can enjoy the fascinating old town on foot. We made a habit of leaving our car at the top end of town so that to start with, our walking was downhill. On our way back up we stopped for a snack or a gelato, to break the walk. Dinner at a restaurant near our resort gave us the opportunity to sample the Sagrantino de Montefalco, one of Umbrias best wines, which we enjoyed. We also managed to find a good wine bar in Torgiano where we sampled various wines and cheeses from the region.

Another of the charming Umbrian cities is Orvieto, with its famous Duomo, one of the masterpieces of Italian Gothic art. Banded in black-and-white marble,  the church is adorned with frescoes, stunning mosaics, bas-reliefs and delicate braids of flowers and vines on its façade. Begun in 1290, it took three centuries to complete. Unfortunately for us, the façade was almost entirely covered with scaffolding!

Orvieto dates back to Etruscan times and is a walled town perched high on a plateau atop huge tufa cliffs. Since the town is closed to non-resident traffic, a funicular and escalators are provided to get visitors up to the historic centre. A secret underground city with tunnels, galleries, wells, stairs, quarries, cellars, and rooms dating back to Etruscan times have been discovered.

Perugia, only 25km from Assisi, is Umbria’s main city – a lively university town with a fascinating medieval centre. Its walled historic centre is also situated high on a hill, serviced by escalators. This area is full of cultural and architectural masterpieces, with one of the most extensive museum collections in Italy. One of the universities, the Universitá per Stranieri, serves as an Italian language and culture school for students from all over the world.

The Palazzo dei Priori houses Umbria’s foremost art gallery, the Galleria Nazionale dell’Umbria as well as other functions such as the Council Hall and the Tourist Office. Above the steps to the main arched doorway facing the Piazza are the city’s symbols, the griffin of Perugia and the Imperial Guelf lion. It is a favourite spot for locals to sit, but don’t try to eat while sitting there or the Carabinieri will move you along with a warning!

Perugia has become famous for chocolate, mostly because of a single firm, Perugina, whose Baci (kisses) are widely exported. Perugia chocolate is very popular in Italy, and the city hosts a chocolate festival in October of every year. We found the Casa di Cioccolato and bought some supplies. The shops in the town also sold lots of textiles and ceramics.

Other places of interest in Perugia include the Piazza IV Novembre, the Maggiore Fountain and the gothic Basilica of San Lorenzo. The piazza was the central Etruscan square and the Forum under Roman occupation. The fountain that stands at the centre of the square is considered one of the finest still in existence. At the southern end of the city, the Giardini Carducci is a nice spot for taking in the panoramic views and cooling off in the evening breeze.