Gibraltar is a British Overseas Territory located on the southern end of the Iberian peninsula. Though often incorrectly referred to as an island, its land area of 6.7 km2 (2.6 sq mi) is linked via a flat isthmus with Spain to the north. ‘Gibraltar’ came from Arabic Jabal Tariq meaning the ‘Mountain of Tariq’, named after the Ummayad General Tariq ibn Ziyad. A Berber, he led the first Moorish incursion into Iberia in 711, at this spot, thus starting Muslim rule which lasted till 15th century. Gibraltar was ceded in perpetuity to Great Britain by Spain in the 1713 Treaty of Utrecht and was formally declared a British colony in 1830. Our cruise on the HAL ship, Rotterdam, called in there on its way from the Atlantic to the western Mediterranean ports.

This was our second visit to Gibraltar, the first being in 2010 when we spent three weeks driving around Spain and another 9 days touring in Morocco. On that day, as we drove down the Costa del Sol we could see a great triangular rock looming up in the distance – a spectacular sight. We left our car in a large carpark in La Linea (the border town) and walked across the road to the customs entry. Then after checking there were no planes about to land or take off – since the runway crosses the roadway (!!) –  we walked straight into the town. The easiest and cheapest way to sight-see was to take a local bus from Winston Churchill Avenue and do a run out to Europa Point and back.

This is one of the southernmost points of Europe, where the Atlantic meets the Mediterranean and the Trinity Lighthouse has been operating since 1841. It stands 49 m above sea level and its beacon ranges about 37km. Also at the point is a converted  mosque, a Christian shrine in honour of Our Lady of Europe which also served as a warning beacon from about 1462, following the defeat and expulsion of the Moors. An elegant new mosque, built in 1997, is now nearby and is called The Mosque of The Custodian of the The Holy Mosques, or more colloquially the Ibrahim-Al-Ibrahim Mosque. 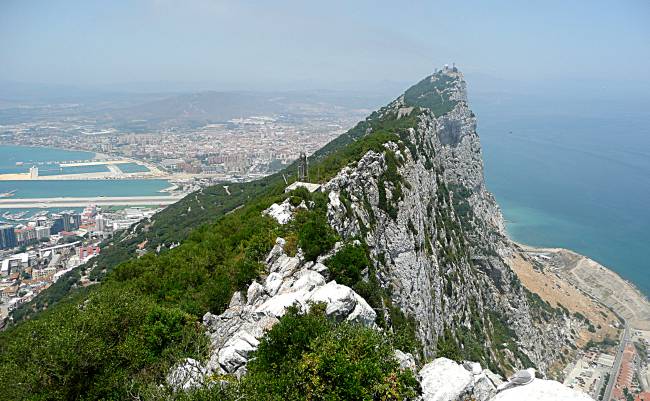 Getting off at the cable car station alongside the Alameda Botanic Gardens and Wildlife Park at the northern end of Europa Road we were lifted high up to the Top of the Rock to the terraces and lookouts. On a clear day you can see not only Spain, but across to Africa. This helps explain Gibraltar’s the importance of Gibraltar’s strategic geographical location and the role it has played throughout history. According to legend, Hercules passed through here to fight the giant Geryon – his tenth labour – and opened up the Strait, creating the pillars which received his name, beyond which ancient mariners feared to venture. 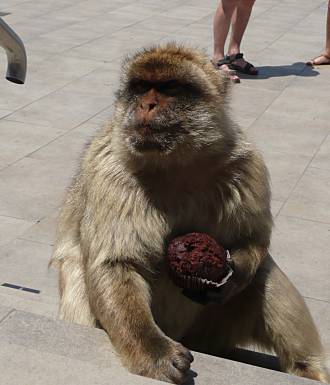 Gibraltar’s most popular attractions are the macaques or Barbary Apes. These tail-less monkeys are quite cute most of the time, but since they are wild creatures it is forbidden to feed them as they can become quite aggressive. It is good sense to remove caps and sunglasses when near them as they are known to steal them right off your head. We witnessed one macaque come inside the cafe and steal a muffin from a small child and scamper off with it. It was quite alarming. We were warned not to take food outside the cafe. 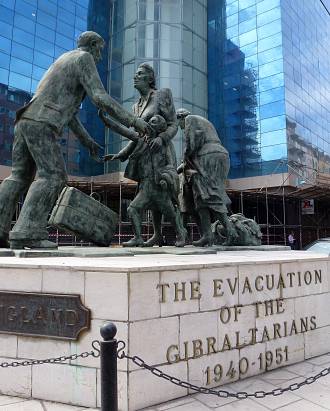 The Rotterdam docked at the Cruise Terminal on north mole which left us with a long walk into town. At Waterport Place, on the way in, we noticed a touching monument commemorating the forced World War II evacuation of about 16700 civilians – the elderly, the infirm, women and children who were forced to leave their homes on the Rock for temporary accommodation in Jamaica, Maderia, Northern Ireland and London. Only in 1951 did the last batch of evacuees returned to their homeland.

Passing the fountain on Waterport Roundabout and through the arched walls, we emerged in Casemates Square, the social hub of the city. Named after the barracks at the northern end of the square this place has served many purposes, including the site of pubic executions. Nowadays it boasts a plethora of cafes, bars and restaurants and hosts craft markets and  live open-air concerts. We stopped at the outside tables of Costas Coffee for iced coffees and to use their free wifi to catch up with emails and such. 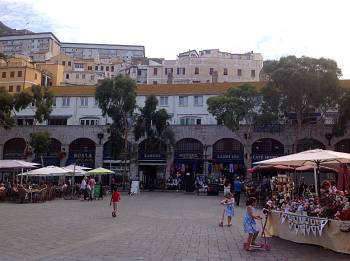 Main Street, the centre of Gibraltar’s commercial district, leads off to the south, providing plenty of opportunities to buy tax free goods in stores that remind the British tourist of home, such as Marks & Spencers.

The architectural landscape of Gibraltar displays styles from the various nationalities that have inhabited the area over the centuries – English, Dutch, Spanish, Maltese, Genoese, Portugese, Jews and of course the Moors. The Moorish Castle complex is made up of various buildings, gates, fortified walls and its most dominant features, The Tower of Homage and The Gate House. The former is an impressive sight, clearly visible to all visitors, because of its dominant and strategic position.

The Gothic Catholic Cathedral of St Mary the Crowned was built on the site of a demolished  mosque in the 15th century, soon after the Moors were expelled. Only the courtyard remains from the original complex. Strangely, the Anglican Cathedral of the Holy Trinity looks more like a Moorish palace from the outside due to its Moorish Revival style, although it was constructed much later in the early 19th century.

Originally a Franciscan friary founded in the 16th century, the Convent has been the official residence of the Governor of Gibraltar since 1728. It has lost much of its original features due to renovations in the 19th century.

The adjacent King’s Chapel was part of the Franciscan convent and later became the garrison church. It was the first purpose built church to be constructed in Gibraltar.

Opposite is the Convent Guard House with two large cannon out front.

Another attractive building is the former Central Police Headquarters in Irish Town. This Victorian Gothic building was constructed in 1864.

Gibraltar has a colourful military heritage, from the time of the expulsion of the Moors, to the unsuccessful Great Siege by Spain from 1779-83, its role in the Napoleonic Wars (1803-15) and World War II. The Rock is  riddled with caves and tunnels, many of them dug out during the siege and further extended during WWII. Defensive installations include the 100 Ton Gun, several 18th and 19th century cannon,  gun embrasures and batteries. The most popular cave is St Michael’s Cave, a virtual underground cathedral. There are thought to be over 140 caves – some inhabited from Neanderthal times – created by the effect of erosion on the limestone monolith.

It might not be a very big territory, but there is no lack of interesting things to see and do!