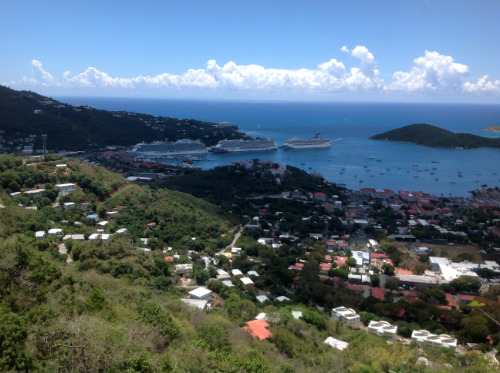 According to the website CruiseTT, this port was going to be brimming with cruise passengers as five big ships were due in that day. St Thomas is one of the US Virgin Islands and its capital, Charlotte Amalie, is reputed to be very good for duty free shopping, but the thought of the crowds did not entice me. We thought the best thing to do was get a taxi and clear out to the other side 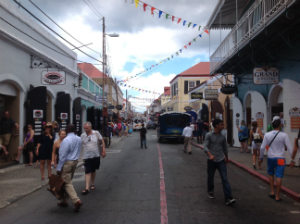 of the island. However when we got down to the bus/taxi rank, we found a number of small bus drivers spruiking for passengers so we joined with about 10 others and set off for an island tour. They call these buses “safari” taxis as most of them are open-sided and play cheerful Caribbean style music as you drive along, while the driver is able to give a description of the points of interest over the microphone.

Our route took us up winding mountainous roads which gave us panoramic views of the harbour at Charlotte Amalie so we saw all the cruise ships at the two main docks. We stopped several times for photo opportunities, particularly for photos of the famous Magen’s Bay beach which has mile long white sands and is voted the best beach in the Caribbean. 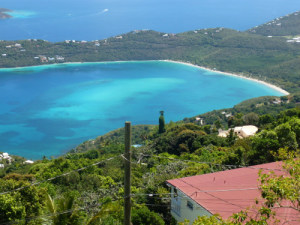 At the top of Crown Mountain, the highest point on the island, is the Mountain Top duty free store and cafe which has a huge observation deck and affords more great views of this photogenic island. You can see right over to the other US island of St John and the British Virgin Islands. The passengers in our bus took full advantage of the shopping for clothes and souvenirs as well as the popular Banana Daiquiris for sale at the bar. 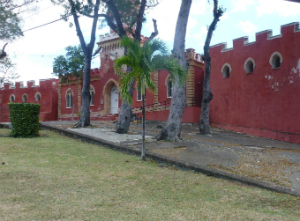 On the way back to town the driver pointed out the old tower of Blackbeard’s Castle (now part of a holiday rental complex). Pirates were said to maraud in the area, but whether Blackbeard actually had any castle here is speculative. Nevertheless, the town still boasts the oldest standing structure in the Caribbean – Fort Christian – which was built to defend the early Danish settlers. It later became an administrative centre, a residence for the governors, a prison and a police station, before being turned into a museum. Unfortunately it has been closed for several years awaiting restoration.