While other cruisers climbed aboard buses bound for Seville, we took the shuttle bus into Huelva city centre, where we had already arranged the hire of a car, so we could have a day on our own. Huelva is both a region and an attractive city on the southwestern coast of Spain, known as the Costa de la Luz (Coast of Light), and situated at the confluence of the rivers Odiel and Tinto. It has been inhabited since 3000BC and there are still Roman ruins to be found. But its major claims to fame rest with the creation of Spain’s oldest football club – Recreativo de Huelva (1889) and various sites connected with Christopher Columbus who gathered manpower and financial support for his voyage of discovery from the people of this area. Both in the nearby countryside and in the architecture of the city, the legacy of the substantial mining of copper and pyrite by British mining company Rio Tinto during the late 19th and early 20th centuries can still be seen, while Huelva also acts as a gateway to the Doñana National Park. But it was the beaches and golfing resorts along the coast to the northwest that was the attraction that interested hubby the most.

About 22 km west of Huelva, at the mouth of the Piedras river, is the village of El Rompido. The river has extensive salt marshes along its banks and these, along with coastal pine woods, sand dunes and tidal creeks, make up a protected reserve which boasts a rich array of plants and birds. Golf El Rompido offers the only 36-hole course in the area, specifically designed by Álvaro Arana with respect for the environment in mind. Surrounded by the natural beauty of the marshlands, it weaves its way through pine trees and orange groves with long, wide fairways.

Hubby played the North Course, a par 72 course opened in 2006 and deemed to be both challenging and entertaining. The Clubhouse, situated on the South Course, has a surprisingly original design which is modern and minimalist. Its terraces offer some spectacular views of hole 18, the River Piedras and the Atlantic. Golf El Rompido has been recognized as one of the best golf courses both nationally and internationally.  The Peugeot Golf Guide ranks it as one of the Top 10 Spanish Courses, while it is ranked 30th in the Top 100 Golf Courses in Spain. 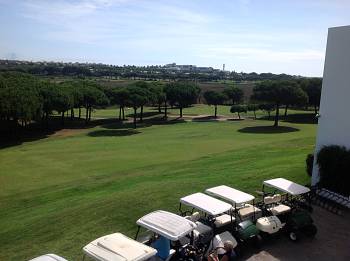 With hubby occupied on his favourite pastime, I was free to explore the local area. The Piedras river runs parallel to the coast, creating a 13 km long sandy spit, la Flecha del Rompido, and the beaches from El Rompido to El Portil are tucked behind it. Due to the large tidal variations, the best time to visit the protected waterway is during high tide. A ferry service runs holiday makers across the channel to take advantage of the isolated, pristine beaches. The fishing village of El Rompido is one of the most tranquil and uncrowded spots on Huelva’s Costa de la Luz. A variety of bars and fish restaurants stretch along the waterfront.

In the centre of the village is the Iglesia de Nuestra Señora del Carmen. Nearby, a resort style commercial centre, El Faro, takes its name from the emblematic lighthouse. Everything was very quiet and many of the shops were closed as it was approaching midday, so I decided to drive back towards Huelva and investigate some other towns.

The town of Punta Umbria, named for the long point stretching out to the sea from the beach is a fishing village located on the banks of the Rio Odiel river and across the water from the capital, Huelva. It is the largest seaside town along the Huelva Costa de la Luz. It’s busy with beachgoers from Seville and Huelva city in the summer and also popular with those who practice windsurfing and kite surfing. The town owes its origins to a tower that was built in the 14th century with the intention of warning the people of Huelva of potential invasions.

Since it was during siesta time the only places open were bars and restaurants. After a short walk around I stopped at ‘Casa Mona’, a Moroccan-themed restaurant which had attracted quite a few of the locals. Here I tried the popular fried chocos (cuttlefish/calamari) which were very soft, light and delicious. By 4pm, and with the shops still closed, I gave up on the idea of shopping and set off back to the golf club. There I waited on the terrace with cake and coffee waiting for hubby to come back in. Unfortunately it had been a slow round and he did not return till nearly 6pm. We had to be back in Huelva at the pick-up point for the shuttle by 7pm, so it was an anxious and speedy drive back to the city. Luckily for us the shuttle was running late and we made it back to the ship OK. Missing your cruise ship is something too horrible to think about!