Our week in Barcelona was jam-packed with sightseeing. We were booked into the HCC Hotel Regente which is very well located just north west of the Plaça Catalunya on Rambla Catalunya and not far from the Passeig de Gràcia metro station, making it a very easy transfer by train from the airport, as well as for accessing the city’s metro lines during our excursions.

The architecture in this part of the city contains examples of the very ornate Art Nouveau style boasting several buildings designed by northern Spain’s most famous son, Antoni Gaudí, such as Casa Batlló and Casa Milà, also known as La Pedrera (top). Although we did not have time to go in to those, we did spend time checking out a few of the other architectural marvels.

La Sagrada Familia. Naturally, you cannot visit Barcelona without paying homage to the modernista architecture, epitomised by the famous basilica La Sagrada Familia,  Antoni Gaudí’s most celebrated work. Begun in 1882 under a predecessor, the project was taken over and redesigned in 1883 by Gaudí, who unfortunately did not live long enough to see more than a quarter of it completed. In fact it is not expected to be finished until 2026, the centenary of his death. When we were there in late 2015 it was 70 per cent complete.  Although it is unfinished it has been consecrated already and so can be used for masses. It is the most popular tourist attraction in Barcelona, which fortunately provides income for its continued construction.

One of the best viewpoints is from a park to the north-east. It is possible to see contrasting shades in the stonework showing different phases of completion.

From this side you can see the Nativity Façade, which was the first side constructed, showing the rich ornamentation that Gaudí intended to be used all over. This façade represents the joy of all creation at the birth of Jesus and recounts the main events in the lives of the Holy Family.

It is no accident that this façade faces the rising sun, symbolic of creation.  Shining through the stained glass windows as it moves during the course of the day, the light gives the architecture  expression and grandeur.

Facing the setting sun is the Passion Façade. This represents the passion, death and resurrection of Jesus. The style here is a rigid, angular form intended to be confronting and to show the severity and brutality of Christ’s death. And while Christ’s face is almost impossible to see on the cross, the face of an Apostle on the level below is the image of Antoni Gaudí, in tribute to his genius.

Construction on the Glory Façade, which will be the main entrance, is still under way. It will represent the journey of mankind from its origin to fulfilment and glory. Decorations on the façades include words from liturgy such as ‘Hosanna’ and prayers such as the Hail Mary on the apse tower. Inside the Glory door, there is a large plaque bearing the Lord’s Prayer in Catalan, with words from the prayer in 50 languages.

Gaudí drew his inspirations from nature as well as devising various abstract shapes not used on churches before. Inside, the columns are designed to mirror trees and branches, while symbols of the Eucharist – fruit, ears of corn and grapes – adorn the tops of towers and various rooftop points and a ‘Tree of Life’ crowns the top of the Nativity portico. On completion, the basilica will have 18 spires, 12 for the Apostles, one for the Virgin Mary, four for the Evangelists Matthew, Mark, Luke and John, and the highest, for Jesus Christ. Once it is finished it will be the tallest church building in the world. Following his death in 1926, Gaudí’s body was laid to rest in a crypt within the basilica.

Park Güell. At the top of a steep hill which affords wonderful views of Barcelona below, is Parc Güell. This park, also designed by architect Antoni Gaudí, was built between 1900 and 1914 but was not officially opened as a public park until 1926. Count Eusebi Güell had the idea of creating an exclusive housing development there, but it never really got off the ground. Güell occupied one of the houses and Gaudí, another, which is now a museum containing interesting furniture also designed by Gaudí.

Eventually the area was developed as a municipal garden which has free entry. However the monumental zone is subject to charge and there is a quota of 400 tourists allowed entry per half hour. It pays to book online. In 1984, UNESCO declared the park a World Heritage Site.

The monumental zone is arranged around a large central square bordered by a snaking, mosaic-covered bench. Below the square, the roof is supported by 86 Doric columns, like trees, with paths between them, and viaducts on sloping columns. The park contains amazing stone structures, such as the terrace walls which resemble the trees above, stunning tiling and fascinating buildings. The Gaudí dragon (or salamander) fountain on the stairway to the terrace is adorned in beautiful coloured tiling, as are various pinnacles on building rooftops and the ceiling mosaics in the Hypostyle Room under the terrace. 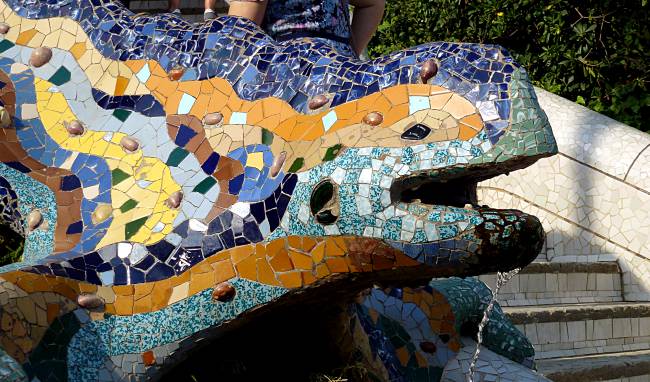 The Barri Gòtic (Gothic Quarter) is the centre of the old city of Barcelona.  Some of the streets here are so narrow that traffic is forbidden entry. Many of the buildings date from medieval times, some from as far back as the Roman settlement of Barcelona, such as the walls near the cathedral.  However a massive restoration project was undertaken during the early twentieth century which means that several of the notable examples of architecture are not entirely Gothic.

The ornate bridge over Carrer del Bisbe, the façade of the Barcelona Cathedral  (Cathedral of Santa Eulàlia) and several sections of the Picasso Museum buildings were thus adorned with neo-Gothic elements. The majority of the cathedral, however, was constructed in the 14th century. Unusually, it has a secluded cloister where 13 white geese are kept, 13 being the age of Saint Eulàlia when she was martyred.

The Plaça Reial, just in from La Rambla, is a popular meeting place which is bordered by a large number of restaurants and some of the city’s most famous nightclubs.

Picasso Museum. Having seen the fine examples of sculpture dotted around the city, it was now time for us to pay a visit to the works of another of Spain’s favourite sons – Pablo Picasso.  It was not without its dramas – it took us three attempts to get in! First – it is not open Mondays. Second, although you can book online, we didn’t, and soon discovered there was a quota on admissions and we missed the cut after standing in line outside for a while. The third attempt was successful despite a very long wait and a strictly-timed entry.

Housed in five former medieval palaces, the collection mainly centres on Picasso’s early works up to and  including his Blue Period, particularly those completed during his years in Barcelona, and reveals the transition of his style from classical realism to abstract forms such as cubism and surrealism. The permanent collection is organized into three sections: painting and drawing, engraving, and ceramics. There is also a special exhibitions space and a library containing publications documenting Picasso’s life and works.

Barcelona is an arty and architectural delight. But there was still more to see outside the city, including a visit to a couple of Cava wineries for which the area is well known. So ‘stay tuned’ for the next instalment on Barcelona and Beyond.

Visit La Sagrada Familia in Barcelona on a 1.5-hour skip-the-line tour! With a knowledgeable local guide, head straight past the cathedral’s long entrance lines to learn all about the UNESCO-listed cathedral and its charismatic creator: Antoni Gaudi. After exploring the monument, visit the onsite La Sagrada Familia Museum to see an array of cathedral artifacts.

Visit some of Barcelona’s important locations with this complete tour in one day. See alongside your knowledgeable local guide the popular Park Guell, the Sagrada Familia Cathedral, the Gothic Quarter and the National Art Museum of Cataluña. Make the best of your stay while in Spain and embark on the

Fascinated by the art of Pablo Picasso? Then, this 2-hour Barcelona walking tour of the locations connected to the 20th-century Spanish artist will fire your imagination. With an expert guide, set off to discover where Picasso studied, socialized and developed his painting style while he lived Barcelona between 1895 and 1905. See his art school; the café where he met with other arty radicals; and other locations important in his youth. Lastly, enjoy skip-the-line entry to the Picasso Museum; bypassing the lines for a guided tour of its impressive collection.