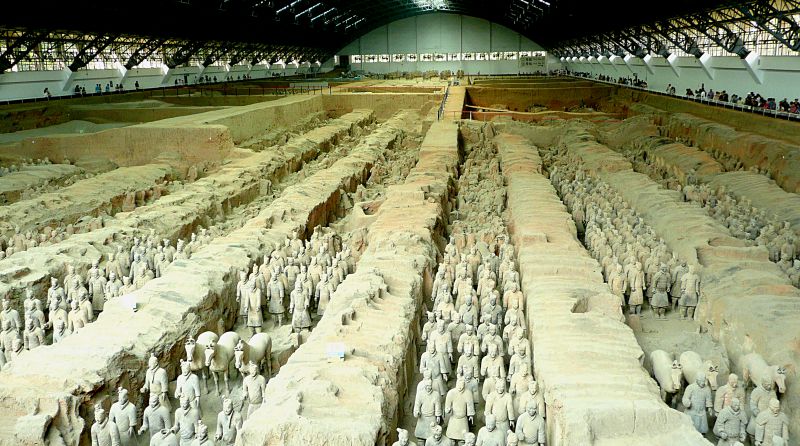 Best known as the home of the Terra Cotta Warriors, Xi’an is also remarkable for its strong Muslim influences due to its position at the start of the ancient Silk Road trading route. It is one of China’s oldest cities, with remains of a neolithic settlement dated to 6,500 years ago. In the 11th century BCE it was a cultural and political centre, which was reinforced after the unification of China in the third century CE under the Qin Dynasty. With its many historical monuments, ancient ruins and tombs in the vicinity, tourism has been an important component of the local economy, and the Xi’an region is one of the most popular tourist destinations in China.

Our first day began with a western-style buffet breakfast at our hotel, the Shangri-La Golden Flower, then off to the Terracotta Warriors and Horses Museum, one of the greatest archaeological sites in the world. The first emperor of China, Qin Shi Huang ordered the construction of the Terracotta Army and his mausoleum about 40km east of Xi’an almost immediately after his ascension to the throne, in order that he would have an army to protect him in the after-life. 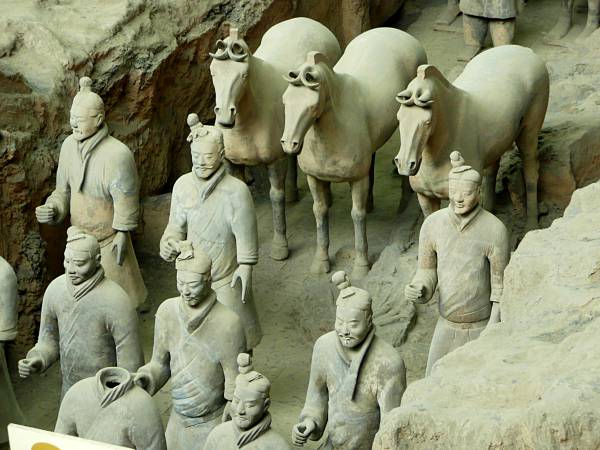 The remains were discovered by a farmer digging a well in 1974 and since then over 7,000 pottery soldiers, horses, chariots, and even weapons have been unearthed from the pits. The terracotta figures are life-sized. They vary in height, uniform, and hairstyle in accordance with rank. Most originally held real weapons such as spears, swords, or crossbows. Originally, the figures were also painted with bright pigments, but these faded quickly once the pits were opened to air and light. It is estimated that about a thousand people participated in the making of the terracotta warriors, from specially skilled artisans to ordinary people.  The faces of the warriors are all different, reflecting the appearances of the workers. Unfortunately, these craftsmen were all entombed with the Emperor once he died, so as not to reveal the whereabouts of the Army. The Mausoleum itself, about 1.5km further to the east, has not been opened, but the dimensions and contents have been reliably identified through modern technology.

Lunch was at the restaurant in the Huaqing Aegean Hot Springs Resort, nearby. Again we were assisted briefly by our guide and relied upon the English translations below the mouthwatering pictures of the various dishes. The area is known for its hotpots, so we decided to order a beef hotpot, among other dishes. When it arrived we had a bit of trouble finding any beef in it, instead finding white sinewy strands in a very tasty soup. After we had consumed most of it and were about to leave, we again asked the guide what was in this dish. To our horror she said – intestines!

The afternoon was spent recovering with a tour of the area around the Big Wild Goose Pagoda and the Provincial History Museum. In the mid-7th century, after returning from his pilgrimage to India, Buddhist monk Xuanzang (popularised in the novel Journey to the West and the television series Monkey) established a translation centre for Sanskrit scriptures. Built to store the translations of Buddhist sutras he obtained from India, the Big Wild Goose Pagoda began construction in 652.

The pagoda is within the Da Ci’en Temple complex, which also houses a pagoda (stupa) garden containing the relics of the nine abbots who once lived there.

The Tang Dynasty Dinner Show was our entertainment of the evening.  The Shaanxi Provincial Song & Dance Troupe, using a visualization of the imperial court as its setting, has produced and performed for over twenty years a series of successive programs of music, singing and dancing, demonstrating the unique classical style and features typical of Xi’an during the time of the Tang Dynasty (618 – 907).

The original Xi’an city wall was started in 194 BCE and took 4 years to finish, enclosing the largest city in the world at that time, at 36 sq km. However it was destroyed at the end of the Tang Dynasty and the new, smaller one that we see today was constructed under the Ming Dynasty in the 14th century. We were planning to hire bikes and ride around the walls, a total of 11.9km, but it rained heavily on that second day and we had to be content with a few brief glimpses from the walls above the main entrance.

Xi’an has a large Muslim community, with seven mosques, the best known being the Great Mosque. Unlike tradition mosques, this one is completely Chinese in its construction and architectural style, except for some Arabic lettering and decorations. Rather than domes or minarets it has a Chinese pagoda-style pavilion and the prayer hall resembles a Chinese temple.

Luckily the rain eased enough for us to explore this area and the market alongside, before heading once again to the airport for our flight to Chongqing.