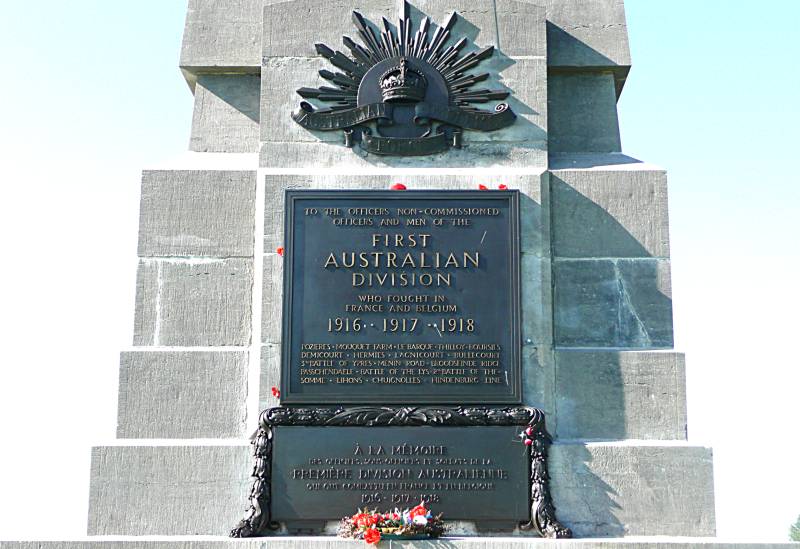 Remembrance Day, November 11, was particularly poignant this year, August 2014 being the 100th anniversary of the outbreak of World War I, or The Great War 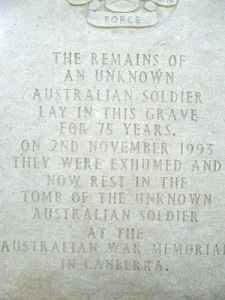 as it was then known. So many young men, from both sides of the conflict, lost their lives in the service of their country. In paying my respects to the fallen, I also give thanks to the countries who now hold their mortal remains in their care and to the people who maintain the War Cemeteries with such dedication and care.

As a keen amateur genealogist, I had researched the involvement of my and my husband’s ancestors who participated in this conflict. Armed with this information, we attempted to visit the battle sites, cemeteries and memorials in the area of the conflict known as the Western Front – Northern France (the Somme) and Belgium (Flanders). 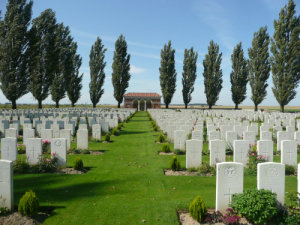 One of my Australian relatives had fought near the town of Bullecourt, on the east of the Somme. He had received minor wounds and was evacuated to a field hospital. He fortunately was still alive by the end of the war and was part of the peace keeping force that stayed behind to help the French get their country on its feet again. This was the first of the war cemeteries we saw and we were so impressed with its appearance. Not a blade of grass was out of place! The gardeners working there respectfully acknowledged us as somehow connected with the graves of these young men who had fought on their town’s behalf. It was very touching. 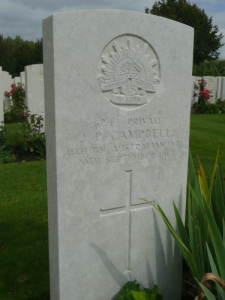 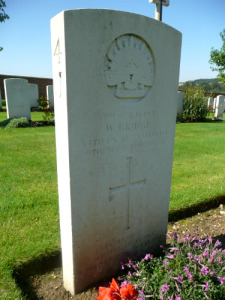 Two other distant relatives unfortunately lost their lives, their bodies were recovered and they lie buried, one at Heilly Station Cemetery, east of Amiens in the Somme  valley and the other in the Hooge Crater Cemetery in Belgium, near Ypres. We were fortunate to locate their graves and proud to honour them. 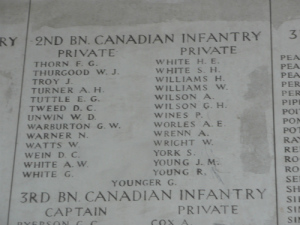 Two of my grandmother’s brothers also lost their lives, but their bodies were never found. One has his name recorded on a panel at the Le Touret Memorial near La Bassee, Northern France, while the other’s name is on the Menin Gate Memorial to the Missing at Ypres in Belgium. The Gate displays nearly 55 thousand names of those missing presumed dead, or whose deaths were registered, but their bodies could not be recovered after the devastation of the battle zone. 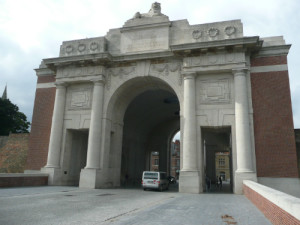 We were very impressed with the townspeople of Ypres. Every night at 8 o’clock a bugler plays the Last Post beneath the arches of the gate and honours the fallen. The night we visited, a police regimental band from Yorkshire was there to lead a very moving service and lay wreaths. Sadly, there were so many missing servicemen that the memorial could not hold all their names, so the nearly 35 thousand who died post August 1917 are inscribed at the Tyne Cot Memorial. 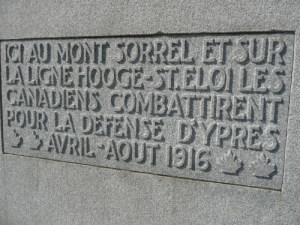 Battlefield Tours can be booked online or in a shop in the main street of Ypres, not far from the Gate. We took a half-day tour and learned much more about the war and the memorials. The tour took us south-east of Ypres where the largely Canadian forces fought the battle of Mont Sorrel. This is where my great-uncle (who had emigrated from England to Canada prior to the war) died on his 27th birthday, June 11, 1916. The nearby Sanctuary Wood Museum Hill 62 contains a preserved/simulated section of front line trenches occupied by the 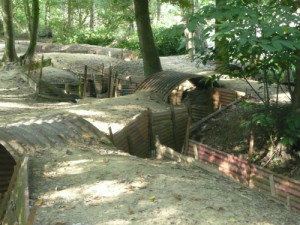 British and Canadians between 1916 and 1917. My husband’s great-uncle was wounded badly while fighting in the same area and was repatriated home. Allied soldiers killed during the battles in this area are buried in the nearby Sanctuary Wood  Cemetery and Hooge Crater Cemetery which we were fortunate to visit. 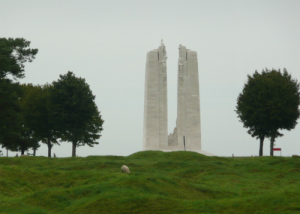 The main Canadian War Memorial is at Vimy Ridge, near Arras, France. Wartime tunnels, trenches, craters and unexploded munitions still honeycomb the grounds of the site, which remains largely closed off for reasons of public safety.

Also near Ypres is the German War Cemetery of Langemark. Originally holding the remains of those German soldiers who died in battles  around Ypres, 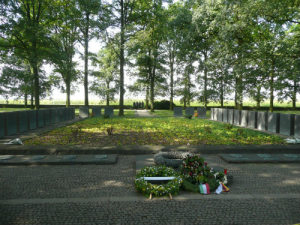 it expanded after the war to include  men from all over Flanders. Over half of the 44 thousand dead there are interred in a mass grave since they could not be identified. There are also 3 thousand children’s graves and two British soldiers’ graves. 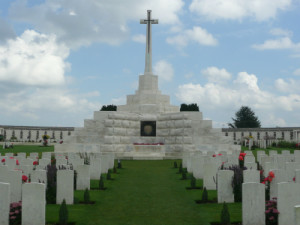 Near Passendale, the large British and allied forces cemetery in Belgium is  called the Tyne Cot Memorial and Cemetery, as it also lists the names of those missing in action in the last 15 months of the war  and those from the New Zealand forces. 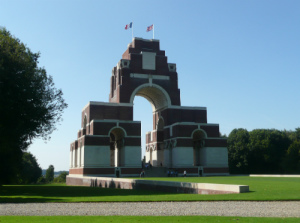 A memorial to British and South African soldiers who lost their lives in the battle for the Somme is at Thiepval, northern France. The inscription of names on the memorial is reserved for those missing, or unidentified, soldiers who have no known grave. Many of the graves in this cemetery contain bodies of both French and British soldiers who could not be identified.

The battle of Fromelles, a futile diversionary exercise from the main action in the Somme, was the debut of the Australian Infantry Forces on the Western Front. The Australian War Memorial described the battle as “the worst 24 hours in Australia’s entire history”, with more than 5 thousand Australians dying in a single day. Until a few years ago the bodies of the fallen had not been discovered, but as a result of investigations led by a Victorian teacher, a site on farming land next to Pheasant Wood has been confirmed as the original burial site and the War Graves Commission has formalised the cemetery including identifying many of the bodies. We were there shortly after the site was first identified. Until that time, the only commemorations of the battle were the 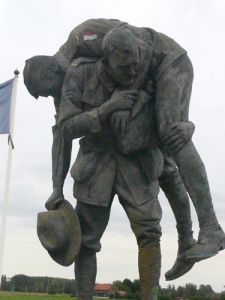 Cobbers statue at the Australian Memorial Park and at the VC Corner Memorial nearby. 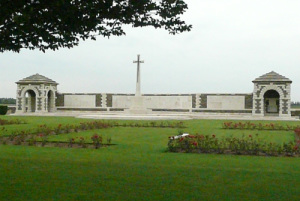 Further south, near the town of Villers Bretonneux, lies the Adelaide War Cemetery. This is the resting place for Australians who died, successfully defending the town, for which the locals are forever grateful. In honour of the sacrifice, the main street of town is called rue de Melbourne and the school is the Victoria school. This school was rebuilt after the war with contributions from the children of Victoria, Australia. There are also kangaroo symbols, Australian flags and a privately run Australian War Museum in the town. 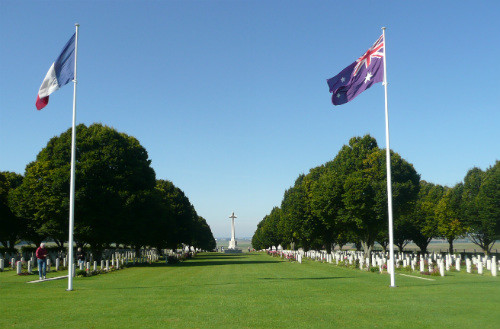