I first went to France in 1991, spending three weeks touring by car and loved it. But it wasn’t till 2003 that I went again. Since then we have been three more times – any excuse will do! My passion has always been for the historical and cultural attractions, while Vin prefers to indulge his interest in wines – his name says it all! We have managed, between us, to see the majority of the country, yet I am always looking for another opportunity to explore new places and revisit others I enjoyed so much.

In no particular order, I have compiled my five favourite places to see. Naturally this is subjective and can only be based on where I  have been. Vin’s wine regions will have to wait for future blogs.

Paris. Of course.  After five visits I have so many wonderful memories. The first time I flew to France I arrived at Orly airport and  drove in to Paris by hire car  – the first time I had driven on the ‘wrong side’ of the road. The périphérique was an amazing experience. Subsequent arrivals have been via the RER (blue line) train from Charles de Gaulle airport, transferring across to the Metro to reach hotels in the 1st, 5th, 6th, and 7th arrondisements. I have done a Hop-On Hop-Off Bus tour around the city to get a good overview of the place and made sure I saw all the main tourist sites.

I have visited the Louvre and the Musee D’Orsay, been to the top of the Tour Eiffel and dined in one of the restaurants below. I have seen the Place de L’Etoile from atop the Arc de Triomphe and driven in circles around and around the arch, unable to exit on my preferred street for several attempts! I have spent one entire morning exploring the Père Lachaise Cemetery and another few hours in the Catacombs. I have explored the streets of the  Latin Quarter and dined in restaurants there. I have climbed the many steps up to Sacre Coeur for fantastic views of the city and been fascinated by street artists in Place du Tertre, Montmartre. I have taken a Bateaux Mouches Tour on the Seine and had a picnic in the garden behind Notre Dame after seeing inside.

I have walked the streets of Pigalle at night (safely, with Vin) and attended the show at the Moulin Rouge. I have shopped in Galleries Lafayette and wandered the arcades of the 2nd arrondissement. I have bought supplies in the markets of Rue Cler and Rue de Buci and marvelled at the stalls and the people in the Foire de Chatou antiques and brocante market on Ile des Impressionistes just to the west of the city. There is so much to do and see there, and I still need to see more.

Mont Saint-Michel. An iconic island only 600 metres off the Normandy coast, Mont Saint-Michel and its bay are a UNESCO World Heritage Site. Established as a church in the 8th century and later as a monastery, its successive extensions meant many underground crypts and chapels had to be built to compensate for the weight of the Romanesque church above. Further improvements added courtyards, a cloister, a refectory and towers.

It was even used as a prison during the Revolution. From medieval times there has been a village on the south-east side and that whole side was surrounded by high defensible ramparts which we walked along for good views over the mudflats. Previously connected by a causeway that was subject to flooding by high tides, the mount is now accessible (except during March 2015 high tides) via a new bridge from the mainland. When I visited there it was possible to park in the causeway car park (no longer an option) and walk straight through the King’s Gate complete with portcullis. The progressively steeper and winding Grand Rue, or main street, is lined with museums, souvenir shops, restaurants, cafes, houses and the parish church consecrated to St-Pierre, the patron saint of fishermen. High atop the hill is the entrance to the abbey.  There are very few permanent residents and only a few hotels or B&Bs. In the evening the crowds ease off and if you can manage to get accommodation within the walls, like we did, it heightens the experience.

Giverny. The village lies on the Seine River about 80km west of Paris. On my own in a hire car, but with the assistance of GPS – the first time I had used it anywhere –

I managed to negotiate my way from the north of Paris, where I left Vin to play golf, to the Avenue Claude Monet in Giverny where one of my favourite artists is immortalised. Claude Monet, (1840-1926), one of the founders of the Impressionist movement in France, perfected his skill in plein air painting in his garden in Giverny, where he lived from 1883 until his death. Initially Monet rented the house, a barn that doubled as a painting studio, orchards and a small garden. As his work became more successful, he was able to buy the land and house, further extending and developing the studio and gardens as his wealth increased.

Some of his most famous paintings were of his garden, with archways of climbing plants entwined around colored shrubs, and the water garden with the Japanese bridge, the now famous pond with the water lilies, the wisterias and the azaleas. The later weeping willow trees theme was his expression of homage to the soldiers lost in World War I. I spent a couple of carefree hours wandering the gardens, touring the house and gift shop and strolling along the village streets to see the local church. On Monet’s death due to lung cancer in 1926, at the age of 86, he was buried in the Giverny church cemetery. His son, Michel, donated his home, garden, and waterlily pond to the French Academy of Fine Arts in 1966 and today the home and gardens are a major tourist attraction.

Châteaux of the Loire. The large numbers of Châteaux in the Loire valley and its tributaries owe their existence to the fondness of the nobility of France for grand country estates. The areas near historic towns of Amboise, Blois, Chinon, and Tours,

to name the few I have visited, are the sites for the Châteaux of Amboise, Blois, Chambord, Chenonceau, Azay-le-rideau, Ussé and more. Their location on the waterways meant transportation of goods and materials for construction was more easily achieved on barges than by the roads and wagons of the time. Although many were destroyed during the revolution or repurposed for military or hospital uses during the world wars, such as Chenonceau, many have been renovated and opened to the public either as accommodation or as museums, attracting thousand of tourists.

Versailles. The most significant Château of France is the Palais de Versaillles, home of Louis XIV, the Sun-King. Begun as a simple hunting lodge by Louis XIII, the palace expanded into one of the largest palaces in the world under the direction of Louis XIV. Further alterations were made under Louis XVI, including the Baroque chapel. The first time I visited there I videoed the whole experience, walls, floors, ceilings, the lot. I was completely overwhelmed by the opulence and finery. But I only saw the gardens through the windows. The second time was on a Fat Tire Bike Tour, having pedalled to the Metro and taken the train to Versailles, then ridden into the grounds of the palace to have a picnic by the canal with the provisions bought at the central market. 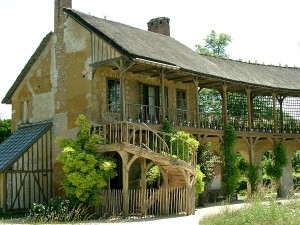 Doing it this way also gave us the opportunity to see the Petit Trianon and the Hameau de la Reine – the rustic ‘village’ created for Marie Antoinette when she wanted to escape the responsibilities and structure of court life.