Far North Queensland is also known as the “Wet Tropics” in tourist signs and information. This is the area north of Cairns, the major tourist hub. We just spent a week there, based at Palm Cove, but travelling between Cairns and Cape Tribulation – “where the rainforest meets the reef” (to use the tourist spin).

Palm Cove lies about 25 minutes to the north of Cairns – part of the area  known locally as the Northern Beaches. The area has not been over-commercialised with high-rise condos, so it retains a great casual laid-back atmosphere. Most of the accommodation, shops and restaurants are along Williams Esplanade, right opposite the beach.

Another 40 minutes further north, up the winding Captain Cook Highway, lies Port Douglas. The road can be quite dangerous with steep cliffs and sharp bends and a series of spectacular coastal views to distract the driver. Port Douglas is a detour off the main highway which is a couple of kilometres inland at that point. It is a thriving tourist town,  complete with fine hotels and condos, all standards of bars and restaurants, a huge variety 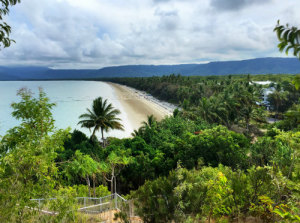 of shops and a Marina which serves as the jumping off point for trips out to the nearby islands and Great Barrier Reef.  It also boasts the 4 Mile Beach.

As the Cook Highway stretches further north, the countryside opens out to reveal sugar cane farms along the flat coastal plains and a hinterland of steep mountains covered in rainforest. Near the town of Mossman, 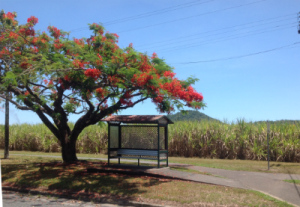 the Mossman Gorge attracts bushwalkers who enjoy this lush southern part of the  Daintree National Park, and tourists wishing to bathe in the cool mountain pools, rapids and waterfalls or learn about the indigenous people and their history and culture.

hectares – the largest portion of tropical rainforest in Australia. It contains the oldest, continuously surviving rainforest on earth, estimated at 135 millions years old.

The Daintree Village is the furthest point on the Cook Highway, cut off by the Daintree River. It is a very small development with a caravan park, a pub, a tour centre and a couple of cafes.

From the dock on the river below there are boat trips available for crocodile and bird-spotting.

To continue further north you need to take the coast road to the river ferry as there is no bridge. From this point it is almost completely rainforest and along the way you will see signs warning of Cassowaries – since these huge flightless birds are native to the area. Unfortunately 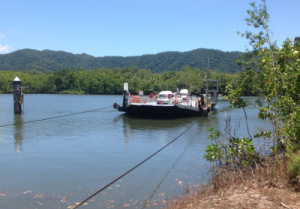 we did not see one.

Not far from the river crossing is a great lookout, which affords views along the coast from Cow Bay to the mouth of the Daintree River and further south.

There are a few small settlements on the way to Cape Tribulation, but large scale development is not permitted in such a precious ecosystem. At Thornton Beach we stopped for lunch at Cafe By The Sea. Cape Trib (as the locals call it) is where the bitumen runs out on the coast road that extends to Cooktown. This is part of the coast charted by Captain Cook on the Endeavour and it was he who named the Cape. 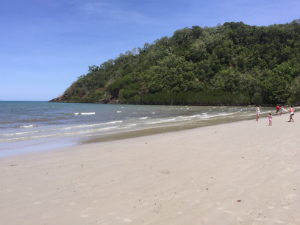 Busloads of tourists come to walk along the beach and take their photos with the rather unimposing cape in the background. There is also a walk out to the lookout at the point of the Cape. There are some picnic tables amongst the scrub near the carpark, but the better place to relax is on the southern side of the Cape at Myall Beach which has an extensive beach park with car parking, toilets, picnic areas and an interpretive display chronicling the development of the area and the futile protests against the creation of the road through the pristine rainforest.  A boardwalk takes you through the rainforest leading to the beach

and another to the Dubuji Beach to the south.

We did this road trip in the one day, though it could be extended if you wanted to do all the activities on offer, since we have been to this area several time before. The towns of Palm Cove, Port Douglas and our trip out to Green Island, from Cairns, will be covered in future blogs – be sure to check them out!

For unspoiled views of the world’s oldest rainforest, head to UNESCO World Heritage-listed Daintree Rainforest for a zip-lining adventure. After a short drive from Cape Tribulation, strap into your harness and get ready to soar along a circuit of cables high above the forest canopy. But with no electricity in the park, how does one get to the start point some 65 feet (20 meters) in the air? Group members can walk in a human-size hamster wheel that generates enough energy to hoist participants up to the first platform. Expert guides provide instruction and safety equipment so you can focus on the fun and spectacular views.