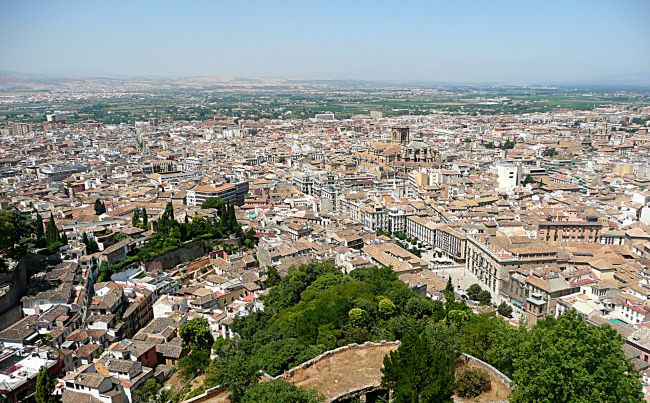 Granada is a popular tourist destination among the cities of Spain, famous for its Alhambra – a Moorish citadel and palace – and conveniently located at the foot of the Sierra Nevada mountains, yet only one hour from the coast. Its history goes back to 5500BC and vestiges of Roman occupation can still be found. Jews and gypsies have also left their legacy, but the most influential culture in this region was that of the Islamic rulers who occupied the area for over 700 years, leaving a wealth of Spanish-Islamic art and architecture. From the top of the tallest tower in the citadel of the Alhambra there are great views across to the city and the Cathedral of Granada.

The symbol of Granada, the Alhambra is a sprawling hilltop fortress complex which comprises several distinct areas: the Alcazaba, a citadel with a watchtower; the Palace of Charles V, a Christian building that houses the Fine Arts Museum; the Generalife, a leisure residence and gardens; and the Nasrid Palaces, the heart of the Alhambra and home of the sultans. 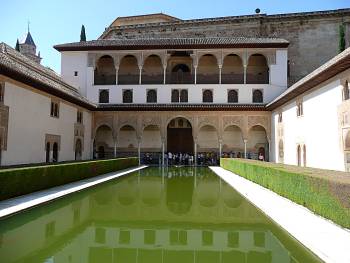 Here you will find courtyards, such as the Court of Myrtles and the Palacio Partal, with artfully laid out gardens and pools enclosed by rooms with intricately moulded stucco walls, beautiful tiling, fine carved wooden ceilings and elaborate stalactite-like decorative vaulting, all worked in mesmerising, symbolic, geometrical patterns and Islamic inscriptions, such as the beautiful Patio of the Lions. 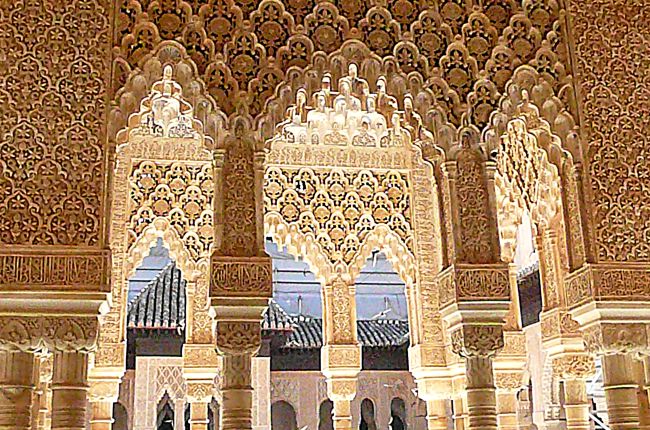 Visiting the Alhambra takes a bit of planning as there are daily limits to the numbers of visitors and also limited time sessions for visiting. We bought our tickets  in advance via the online site, choosing our preferred time, and on the day we took the bus as parking was limited as well. There is so much to see over a vast area, it is important not to spend too much time in any one section, apart from the Generalife. 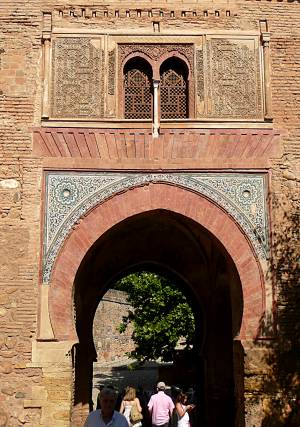 Starting with the Gate of Wine as the entrance to the complex, we wandered throughout, admiring the wonderful Moorish decorations around arches and doorways as well as the tranquil gardens and shady courtyards. We decided to skip the Renaissance neo-Roman style Palace of Charles V and headed straight to the Alcazaba to enjoy the views.

This citadel is the oldest part of the complex, dating from the 9th century. It is made up of several towers and the remains of the living quarters of the elite troops and their families. 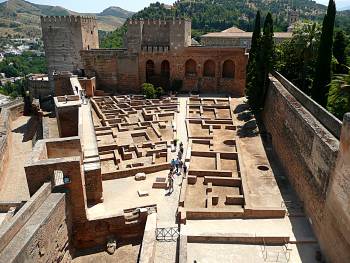 In 1984 the Alhambra was declared a World Heritage Site which was extended in 1994 to include the district of Albaicín – the Medieval Moorish area of narrow winding streets. We spent an enjoyable afternoon wandering around the shops and cafes, though it was quite steep and tiring. Within that district is the neighbourhood of Sacromonte, where the Romani, or Gitanos (gypsies),  settled in Granada after the Christian conquest of the city in 1492. It is one of the most picturesque neighborhoods, full of whitewashed caves cut into the rock and used as homes, cafes and bars. This is the place tourists visit to take in colourful, exciting flamenco performances and the stimulating guitar music. While the best view of these neighbourhoods can be seen from the Alcazaba, the best view of the Alhambra can be had from the Mirador de San Nicolás, on the other side, across the Rio Darrio. There is a cafe there where you can sit and relax, taking in the magnificent vistas.