Too Darn Hot in Seville

I had been so looking forward to roaming the streets of Seville on foot, but the day we arrived it was 45°C in the shade! My usual modus operandi when overseas is to only savour those things that are unique to that country and dismiss the trappings of American influences. So it was with conflicting emotions that I found myself, at the very first opportunity, diving into the air-conditioned oasis of a Starbucks coffee house, right opposite the Cathedral, in order to escape the heat and assuage my thirst with an iced coffee! Thus refreshed, we were able to continue exploring this wonderful city.

Seville is the capital and the largest city of Andalusia. The Palacio de San Telmo (above), formerly a university and seminary, is now the seat of the presidency of the Andalusian Autonomous Government. Although Seville is the fourth largest city in Spain, the Old City is easily covered on foot. It is also apparently the hottest major metropolitan area in Western Europe! (I can vouch for that!) Founded by the Romans, it was also under Muslim rule from 712 until 1248. Its situation on the Guadalquivir River led to its success as a port for international trade and it was also the port from which Ferdinand Magellan departed on his attempt to circumnavigate the world. Fittingly, the remains of Christopher Columbus are interred in a tomb in the Seville Cathedral. Spain’s literary hero, Miguel de Cervantes, lived in Seville for a few years, including within the prison there on account of some financial discrepancies! 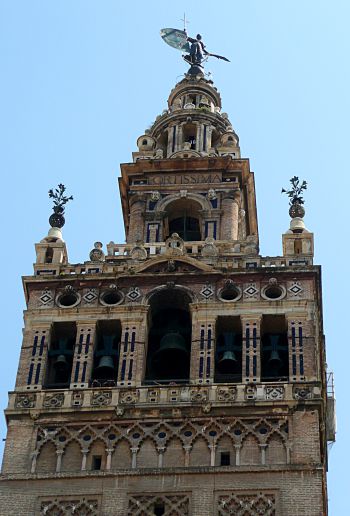 The architecture of the old town still shows some Muslim influence, though mainly the Mudéjar style which was adopted after Seville returned to Christian rule. The Cathedral was built in Gothic Style from 1401–1519 on the former site of the city’s mosque but incorporated the Muslim bell tower, known as La Giralda. The Cathedral of St Mary of the See, as it is officially known, is one of three UNESCO 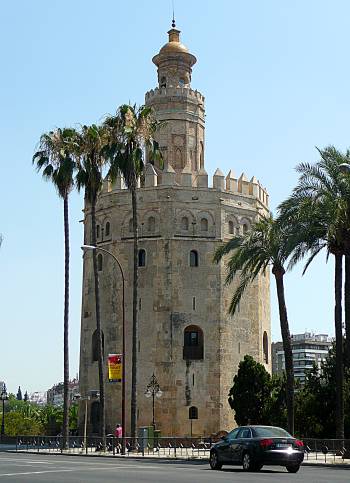 World Heritage sites in Seville, along with the Alcázar (below) and the General Archive of the Indies. 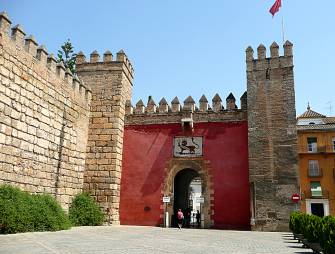 Wandering further afield, we came upon an interesting building all by itself beside the river. The Torre del Oro was built as a watchtower and defensive barrier on the river. A chain was  once strung through the water from the base of the tower to prevent boats from travelling into the river port.

Nearby,  the Plaza de toros de la Real Maestranza de Caballería de Sevilla  is the site of one of the most well-known bullfighting festivals in the world, and one of Seville’s most visited attractions. It began construction in 1749 in the Baroque style and took until 1881 to be completed. 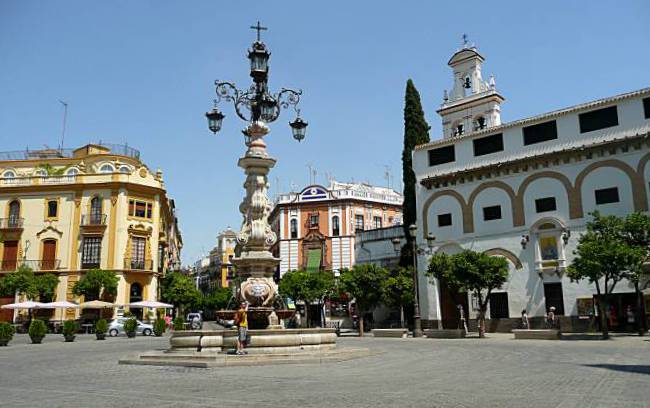 More Baroque architecture is evidenced in the buildings surrounding the Plaza de la Virgen de los Reyes, not far from the Cathedral. Many buildings which have their façades decorated in this style can be found throughout the old city, such as the Hospital de la Caridad which is a charity hospital and church near the Plaza de Toros, founded in 1674. The façade of the church features beautiful blue and white azulejos (tiles) depicting their patrons San Jorge and Santiago and the three theological virtues, Faith, Hope and Charity.

Unfortunately the heat prevented us from too much sightseeing, so we did not manage to visit all the sites we had wanted to see. Hopefully there will be a ‘next time’!