We are all familiar with the Ancient Egyptian practice of entombing servants with their Pharaoh to serve  him in the afterlife.

A similar practice was done by Qin Shi Huang, the first Emperor of China, except the warriors and horses were sculpted in terracotta as a sort of talisman army to protect the Emperor in his afterlife. 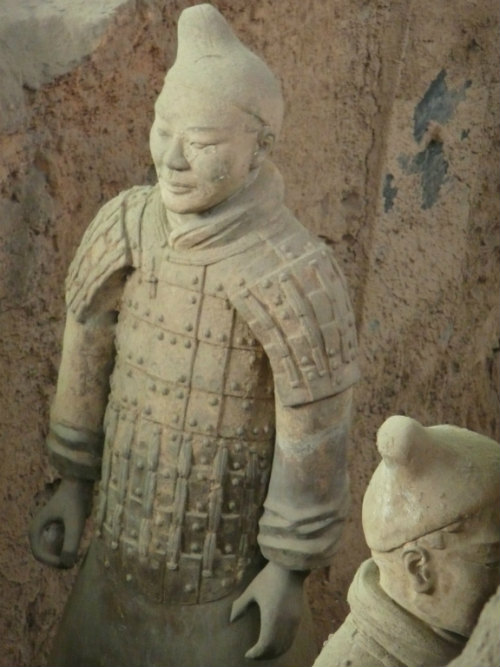 Each one was modelled on a real person, so that is why they all look different. The unfortunate thing was that all those who were involved in the creation of the collection are thought to have been killed afterwards to maintain the secrecy of the pits’ location. The Emperor himself was buried in a tomb mound nearby which has not been excavated. The Terra Cotta Warriors can be found near the city of Xian in central China.

In China Buddhists generally choose burial, although the monks are usually cremated. Their cremated remains are enclosed in Stupa or Chedi within the temple grounds. The famous Chinese monk Xuan Zang‘s remains are in the stupa garden at the Big Wild Goose Pagoda in Xian. 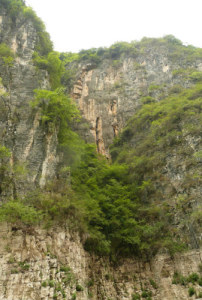 In China, in the valley of the Shennong Stream, a tributary of the Yangtze River, the ethinic minority group of the Maio once practiced a strange form of “burial”. Coffins were suspended in the crevasses in the vally rock walls. We could only just manage to see them as we took a small boat up the stream. It is incredible to think how they managed to put them there.

Another practice in rural parts of China is the expectation that the daughter or daughter-in-law will make preparations for the funerals for her parents or parents-in-law well before they die. In doing that it is not unusual for the coffins to be made or purchased in advance and stored in the family home until needed. When we were cycling in the farming area of Yangshuo we called in to a local family as they liked to invite tourists to see their home and various household contraptions used in earlier days. The old lady there proudly invited us to see her coffin and that of her husband, kept in readiness in a side room.