No, this is not an actual town in Spain, but part of a concept for teaching English to Spaniards.  It was started in 2001 by a Canadian named Richard Vaughan.  The system provides English instruction via classes, the radio and TV in Spain. It also holds regular weekly immersion live-in programs so Spaniards can become really fluent in conversational English. In order to provide the immersion experience it is necessary to rely on English speaking volunteers (Anglos) to provide the wholly English environment. This is how I got involved when I was looking for a chance to volunteer in some capacity on one of my overseas holidays.  English language fluency is highly prized in Spain, particularly in the fields of commerce and technology. Many of the students who participate in the program are funded by their employers. And with the unemployment situation being so desperate in the under 30 age range, having English ability is a real advantage to getting a job. That is why some of the students on my week were funding their own course, to increase their chances of employment. The Anglos come from many different countries, such as the UK, USA, Canada, Australia, New Zealand and South Africa. This gives the students the benefit of hearing many different accents, even though that is sometimes confusing, and many different idiomatic expressions. And no, you don’t have to be a teacher to volunteer, though I once was, and it helped. 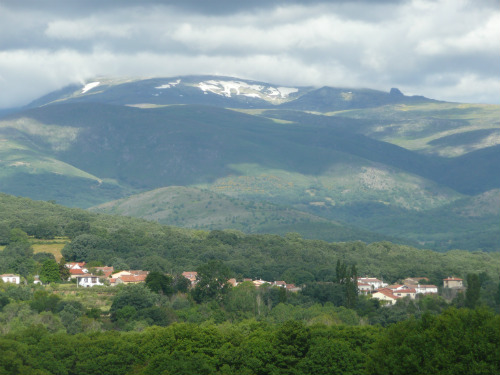 The live-in course runs 6 days and there are usually several going at once at different locations outside Madrid. Mine was held at Barco de Avila, between Avila and Salamanca, about 2 1/2 hours to the west of Madrid. The actual site is Hotel Izan Puerta de Gredos, a beautiful little resort of stone buildings on 15 acres, about a 1/2 hour stroll from the village. The course actually begins informally with a drinks and tapas get-to-know-you session at a bar in Madrid on the Friday night, followed by a bus ride to the hotel the next morning. Volunteers have no expenses from that point onwards as all accommodation, food, wine at meals and transport to and from the hotel are included. As it is a hotel, extra drinks can be purchased from the hotel bar in the evenings if desired. At no time from then onward are the Spaniards allowed to speak anything but English and they are cajoled into sitting with Anglo “strangers”  from the time of the bus ride. At all meal times there must always be an even number of Anglos and Spaniards at the tables. Needless to say, by the end of the week, there are no strangers, only friends. We exchanged email addresses and  Facebook contacts and many are still in regular contact 4 years later.

This is how the days are organised:

One-to-Ones : Each morning after breakfast at 9am there four 50 minute conversations between one Anglo and one Spaniard. The one to ones rotate on an hourly basis, so by the end of the week you see every participant at least once. This was my favourite part of the day, getting to know the Spaniards on an individual basis and also telling them a little about me and my home country. We also had to try to work into our conversation the idioms and phrasal verbs for the day. English is such a complex language in this regard.

Telephone Session:  The Telephone session is a structured one to one conversation over the telephone. Several scenarios are suggested. The Anglo and Spaniard then choose one or two and spend the session speaking on the telephone. This is particularly hard when you cannot see the person face-to-face. It’s amazing how much we rely on visual cues for our understanding.

Conference Call : Conference calls are structured role plays over the telephone. Three Spaniards and at least one Anglo speak in a conference call environment for 40 minutes.

Lunch is at 2pm

Siesta: This is the free time that no self-respecting Spaniard would do without! And many Anglos also guarded that time for a snooze, since it is a full-on program and there are some late nights. However this is also the time to sneak off to Barco de Avila, either on foot, or if you are lucky, one of the Spaniards will have his/her car there.

Group Activities : After siesta there is a group discussion/activity. These group activities are designed for facilitating discussion and team building. It often included several Spaniards giving a talk on a subject chosen by them in their work field or about a hobby.

Entertainment hour : From 8-9 we there is one hour of entertainment; music, theatre, jokes, stories, presentations, karaoke etc – we are all roped in to perform and love every minute of it!

Then there is dinner and free time – if you are not already exhausted enough to retire for the night!

Vaughan Town is always on the look-out for more volunteers. There have been almost 8,000 of them over the last 8 years and the weeks are almost booked up for the remainder of this year and much of the next. But if you are looking for a fun and economical way to volunteer or simply a unique twist to a holiday in Spain, I would suggest you give it a go. This is the link to their web page.