“You must walk the walls!” friends had urged us. So when the Celebrity Silhouette docked in Dubrovnik that was the chief thought in our minds. Thanks to our research on tomsportguides.com we were able to figure out how to get into town from the cruise port, where to buy our tickets, where to begin our ascent and the direction we were supposed to walk in. He also had suggestions for restaurants, attractions within the walls as well as ideas for sightseeing beyond. It made it all so easy!

So, out of the dock area at Gruz Harbour and straight into the public bus station – and we were on our way for about 12 Kunas. Although Kuna is the local currency, we found Euros were also accepted at some ticket offices and shops. Otherwise we used our credit cards. The Old City is about 20 minutes walk from the harbour. Buses no. 1a, 1b,1c, 3 and 8 will take you there in about ten minutes. We could have walked it if we had not been planning to spend the rest of the day walking the walls and the streets below, which could be strenuous at times and it was very hot the day we did it. The walls are nearly 2,000 meters long (1.2 miles) and since every few metres there is a photo opportunity, it took us quite some time.

We entered the old city at the Pile gate (pron. peela) after buying tickets nearby, with the local currency. Then up the 92 steps beside St Saviour’s church to the ramparts. Begun in the 8th Century and expanded upon in the 15th and 16th Centuries, the walls are up to 25 metres high in places and from 4 to 6 m. thick on the landward side but only from 1-1/2 to 3 m. thick on the seaside, due to the added protection of the high cliffs. 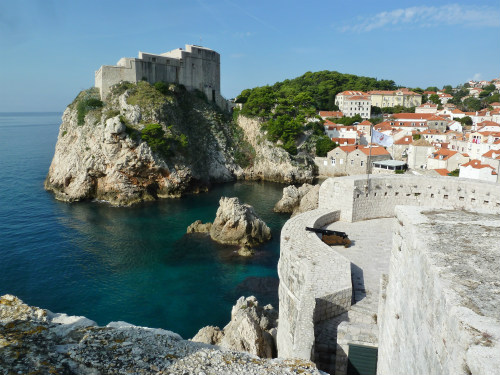 On the mainland side there is also the remains of a moat. At various places there are forts such as Lovrijenac Fort and other sets of stairs at St John’s Fort and St Luke’s. That is not far from the Ploce gate (pron. plocha) which allows access out of the walled town and into the local roads and hinterland.

Walking the walls afforded great views over the city, the old city harbour and the seaside, bird’s-eye views into people’s back yards and a different perspective on the many churches and important public buildings.

During the Croatian War of Independence, 1991 -1992, 63% of the city was damaged by bombs, missiles and fires, even the churches and fountains. It has taken a mammoth effort and cost to restore the city to its medieval glory. 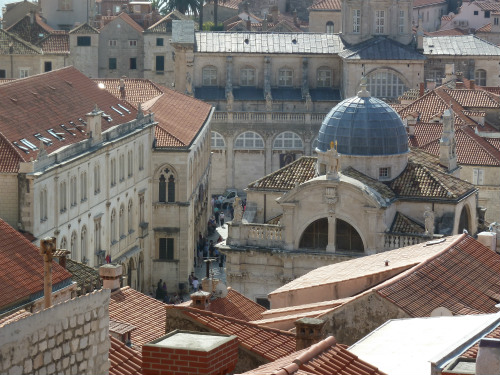 The main street of town is the Placa or Stradun which starts at the Pile gate and runs east, transecting the city, to the Clocktower at the other end. Along the Stradun there are many shops and restaurants, while small side streets run off the main street affording many more places to explore. Along this thoroughfare the millions of feet have worn the flagstones so smooth they are shiny.

The eastern end of the Stradun is also where a lot of the important buildings are located and on the street running south from it to the Cathedral. Here you will find the former Customs Hall or Sponza Palace, the church of St Blaise, City Hall and the Rector’s Palace.

We also found a cluster of restaurants with their chairs and tables out into the square where we stopped for lunch at Konoba Amoret. The food was OK and it had free wifi. Then further to the west was a collection of market stalls for souvenir shopping. Beside the Rector’s Palace is a gate that leads out into the old port and many more cafes and restaurants.

Out through the Ploce gate and up the hill a bit is the cable car which takes you up to a lookout on Mt Srd high above the city. The views are fantastic and you can while away the time taking it all in with a meal or drinks on the terrace.

We ended our day with drinks on the rear deck of our ship as we cruised out of Gruz Harbour, watching the ultra modern Dubrovnik Bridge and outer suburbs in the waning light.