Santorini – The Lost Island of Atlantis?

A popular theory holds that the volcanic eruption on the island of Santorini is the source of the legend of Atlantis. Whether that is true or not, there was a massive eruption some 3,600 years ago at the height of the Minoan civilization. The eruption left a large caldera surrounded by volcanic ash deposits hundreds of metres deep and may have led indirectly to the collapse of the Minoan civilization on the island of Crete, 110 km to the south, through a gigantic tsunami. A giant central, rectangular lagoon, which measures about 12 by 7 km, is surrounded by 300 m  high, steep cliffs on three sides. The depth of the caldera, at 400m, makes it possible for all but the largest ships to anchor anywhere in the protected bay. The capital, Fira, clings to the top of the cliff looking down on the lagoon, making it and other villages appear like snow on a mountain ridge. As our hydrofoil ferry docked at the new port of Athinios we were absolutely blown away by the height and steepness of the caldera cliffs and extremely pleased that there were a number of buses waiting to take passengers up a (hair-raising) zig-zag road to the central bus station. 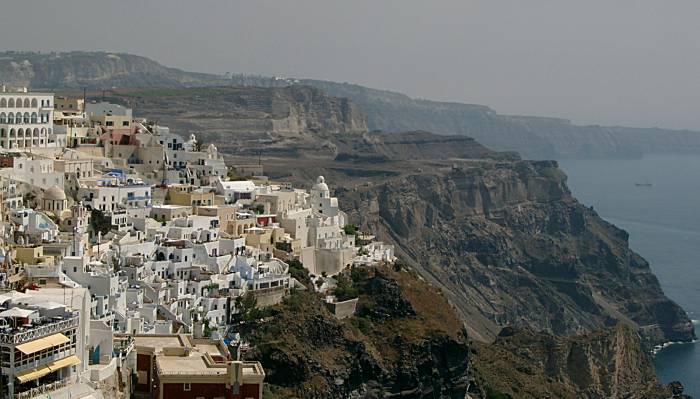 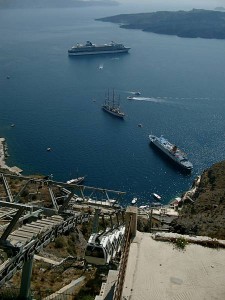 After settling our things at the Sunrise Hotel not far from the bus station, we went wandering the main streets of Fira which hugged the cliff edges. Some very expensive looking hotels and restaurants sit precipitously against the cliffs, claiming the best views over the lagoon. When we reached the area above the old port of Skala we could see (and smell) the cable car (and  donkeys) used to bring up the tourists from the cruise ships, which looked like little boats from where we stood.

The main shopping streets contain a disproportionate number of jewellery shops and more restaurants. We really enjoyed trying out the local food and wines they offered. There are also several travel agents in town who can book tours of the area – we chose a tour that started with the Minoan ruins at 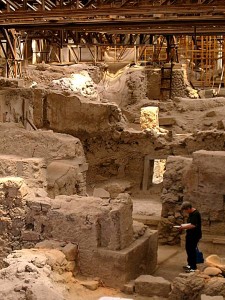 Akrotiri, continued with a boat tour of the caldera islands, then on to Oia for the anticipated magical sunset.

Akrotiri was preserved by the volcanic upheaval which gave rise to the story of Atlantis, however it was a bit of a disappointment as visitors are restricted to walkways, unlike at Pompeii where you are free to wander among the exposed buildings,  and most of the treasures uncovered have been removed to the Museum of Historic Thera, in the central part of Fira. 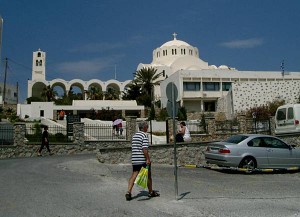 The history of Akrotiri goes back to 3300 B.C., and there are many artefacts and frescoes on display in the museum from the 17th century B.C.

Our tour continued on down to the new port where we boarded a boat (caique) which took us to the island of Nea Kameni in the centre of the caldera. 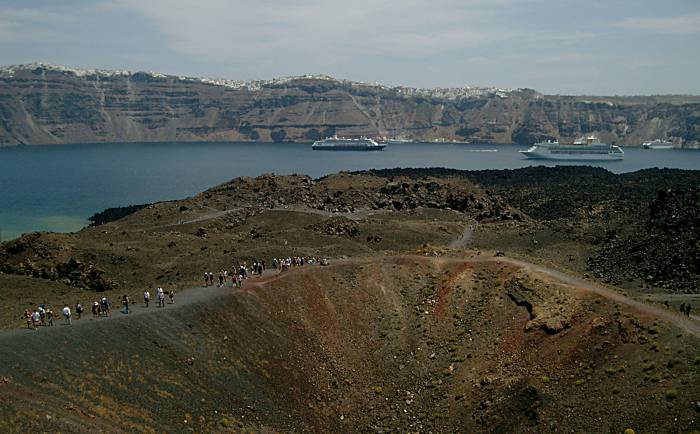 There we walked up the steep gravel path to reach the top of the 130-metre-high volcanic crater, which took about an hour, where it was possible to complete a full circuit of the rim, looking down into the centre where active sulphur vents could be seen, and smelled! The views back to Santorini were spectacular.

The next stop on our boat tour was at the Hot Springs by the island of Palea Kameni. Here warm, rusty water emerges near the shore and tourists are encouraged to jump overboard and swim in to the shallow little bay to experience the 30 degree celsius waters whose iron and manganese are said to be beneficial for various ailments. There were several other boats moored closer to the springs when we arrived, so our swim was quite a distance. But it was refreshing to cool off after our hot walk up the volcano. 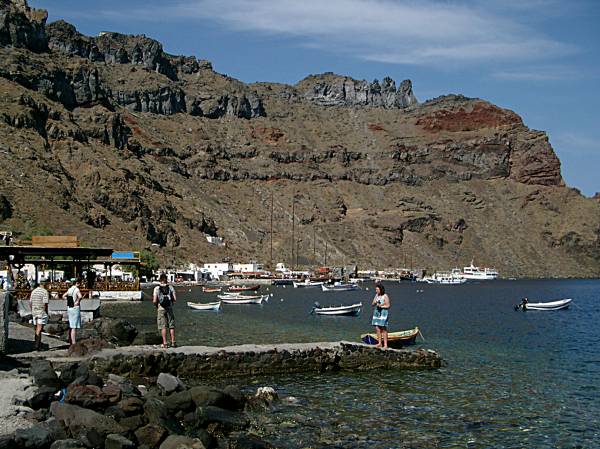 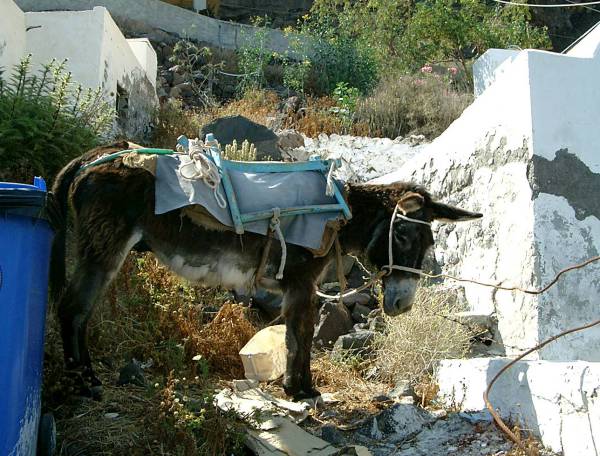 Our lunch stop was the fishing village of Thirassia, on the island of the same name. While a few restaurants and fishermens’ huts are along the shoreline, the actual village is high up on top of the caldera rim. The common form of transport up and down is the sure-footed donkey. Our walk and swim had given us a good appetite, so we stayed in a restaurant for the short duration of our visit. 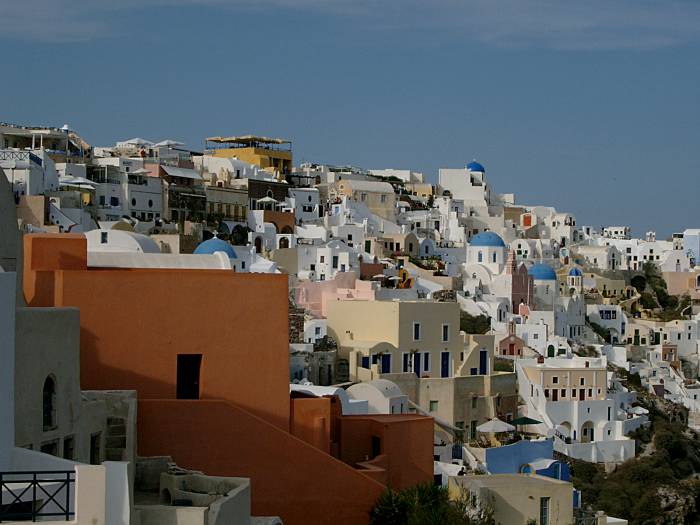 When we arrived at the foot of the track that led up to the village of Oia, I was keen to take a donkey ride rather than struggle up the very steep zig-zag path. Oia is a very pretty village with its white-washed buildings, churches with blue domes and the occasional terra-cotta-coloured building thrown in for contrast. 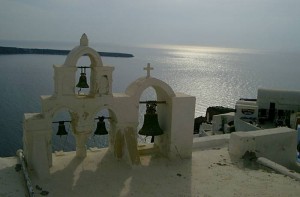 Oia claims to be the best spot on Santorini to witness the sunset, so tourists make sure to book tables on restaurant terraces facing the west in order to get the best views. We found a restaurant with a roof-top dining area with a great aspect, but the weather was not kind and cloud unfortunately masked the sun as it set. 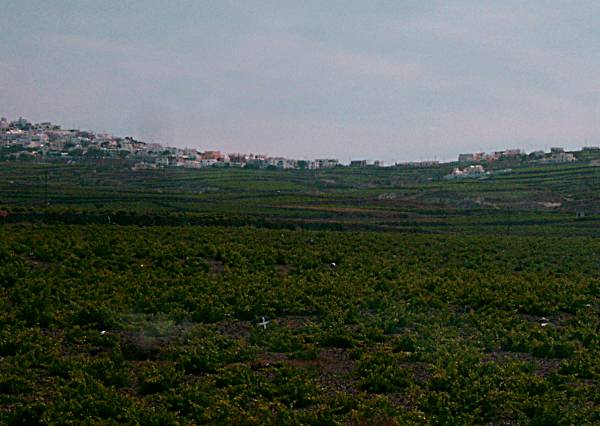 Next day was devoted to visiting the local wineries. The wines on Santorini are primarily white – the Assyrtiko being the main one. The vines are not how we were used to seeing them grown. On Santorini the dry atmosphere, scant rainfall and often very strong winds mean that bush vines do best when grown close to the soil and with the new growth wound in a circle like a basket, so the grapes which grow in the centre are protected. The vines somehow manage to get their water from the porous tufa rock.

It was easy to reach Santo Wines by the local bus service. It is a huge modern building near the caldera rim, with a large terrace with great views of the caldera back to Fira and above the new port. We shared a tasting platter and flight of the main representative wines – Assyrtiko and Vinsanto (a white dessert wine) which we really enjoyed and a dry red wine called Kameni. They also produce sweet red wines from grapes which are fermented after drying in the sun for a few days. The gift shop also has a big range of preserved fruits and vegetables and other wine-related gift ideas. 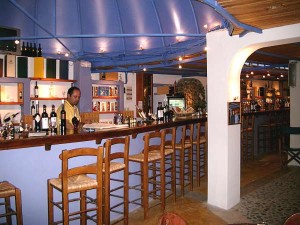 Later that afternoon we set off on a bus tour of the Koutsoyannopoulos Wine Museum and winery. There we tasted three different wines – an Assyrtiko, a very good dry red and a sweet red. This was strange to us as it finished with a very dry palate. This was followed by a buffet dinner outside with the entertainment being a Bellydancer and Greek dancing to which we all joined in. The wine with the meal was not the same standard as the ones on tasting inside, unfortunately.

Our Greek island odyssey ended with a short flight from Santorini to Athens. We were off to Paris, which, while an exciting prospect, did not lessen our sadness at leaving this wonderful country and its Aegean islands. 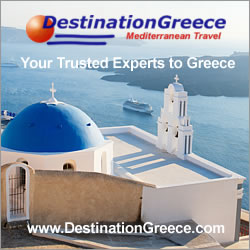