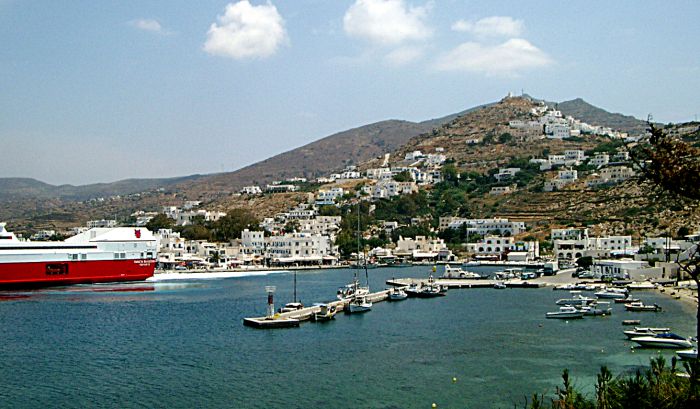 Apparently the best time for party animals to visit Ios is in August when the nightclubs and bars throb to the sound of music and young people having fun. And there are so many of these spots to choose from as you walk up the streets of the town towards the top of the hill. Fortunately for us, then, we visited in late May when the weather was warm enough for sunbaking on the beach and walking home from restaurants at night. But the crowds were not there yet and the place was almost too quiet. But Ios has a lot more to offer than great beaches and nightlife. It is historically important for its ancient (2,800BC) ruins at Skárkos and the fort ruins of Palaiókastro on the northeast side of the island from the Byzantine period. Tradition also has it that the epic poet Homer lived here and was buried in the northern part of the island, near the beach of Plakotos. 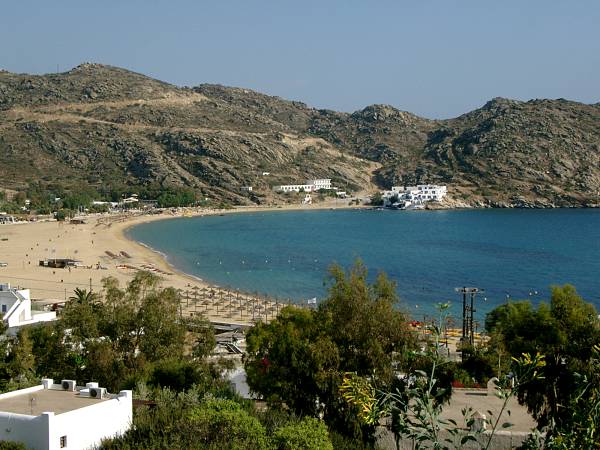 We arrived by hydrofoil and found a bus to take us and our luggage up to the town – Hóra – where we got our bearings before setting off, again by bus, to our accommodation at the Markos Beach Hotel. This is just above the most popular beach on the island – Mylopótas Beach. In fact from our room we had a great view of it. 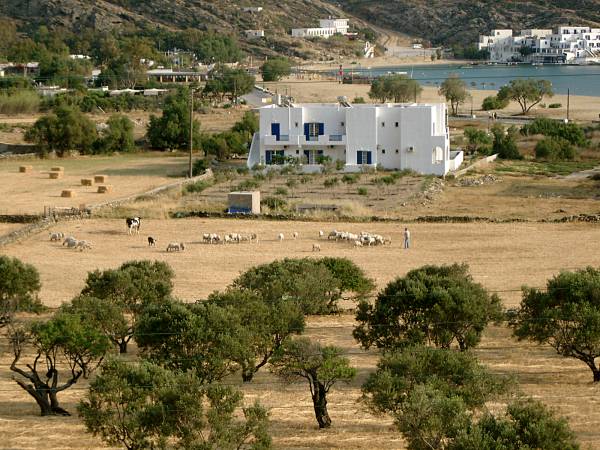 We also had a view of the local shepherd who grazed his flock of sheep and goats on the paddocks below the hotel. We were captivated by the constant ringing of bells hung around the animals’ necks as they foraged for food.

The beach itself was all set up ready for the summer crowds, but with hardly a soul in sight. We spent one afternoon there but the water was too cold for much swimming. 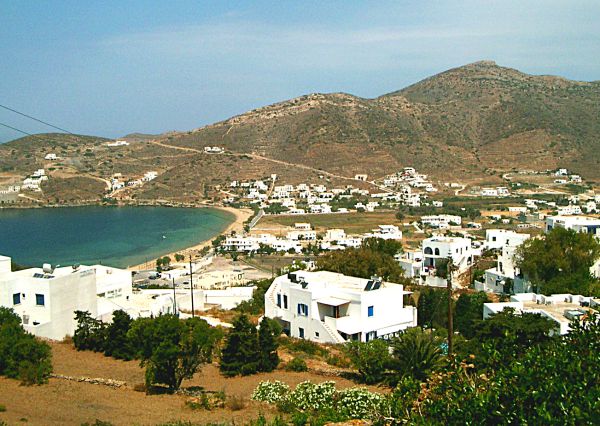 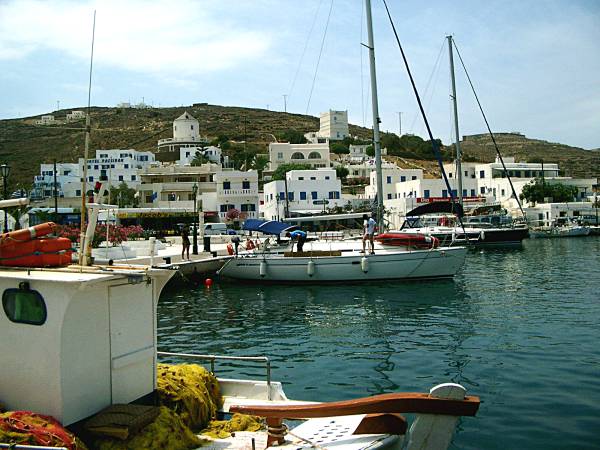 The other easily accessed main beach is Yialós, not far from Hóra and Ormos port. These beaches are well organised with sun lounges, umbrellas, watersports and beach bars pumping out music. The port itself is a village in its own right, with lots of tavernas and shops to cater to the boaties who moor here. 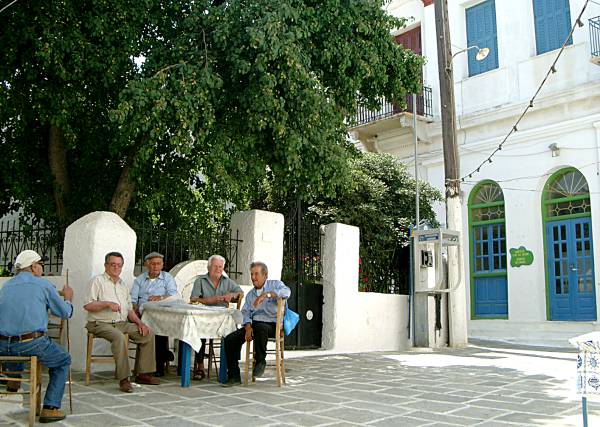 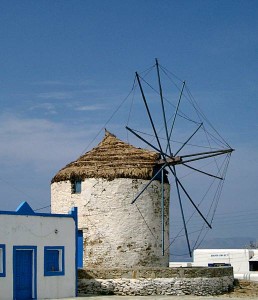 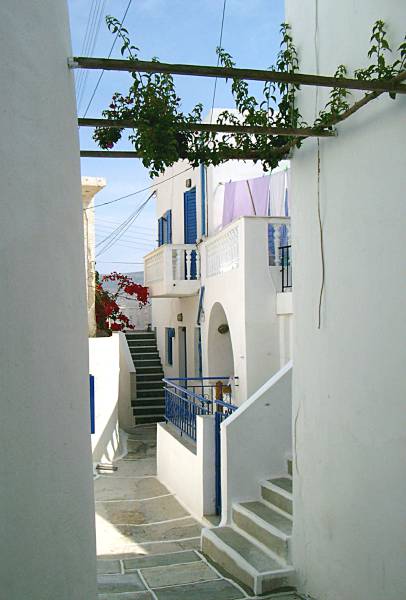 The bus service on the island was cheap and frequent so we did not bother to hire a vehicle. We took a couple of trips into town to check out the shops and the churches. The shops seemed to consist mainly of jewellery and clothing shops, bars and restaurants. The residential area was as we had seen on other islands, with whitewashed houses, blue trims and colourful bougainvillea. And on the higher part of town beside a desolate square we found one of the twelve iconic windmills that served the township. 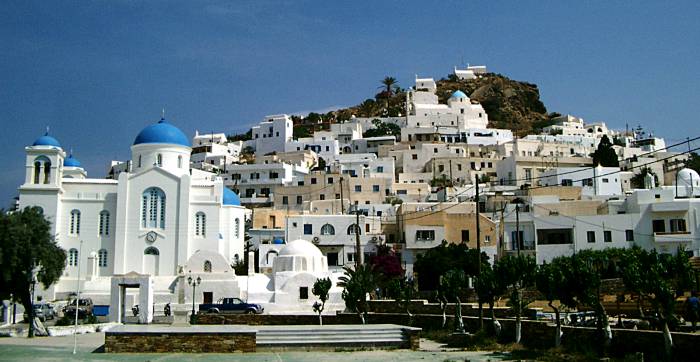 There are so many churches (365!) on the island you can’t miss seeing a few. The Cathedral of Evangelismos in the heart of town was spectacular with its huge size and pretty blue domes. Panayia Gremiótissa, a bit higher up the hill, is the most important church where the town’s most religious feast of the Assumption takes place and several other smaller churches dot the hill at the back of the town, while striking Ayia Eirini stands out in contrast to the barren landscape on the point at the entrance to the port. It was our last wonderful sight of Ios as we left on the last leg of our island hopping to Santorini. 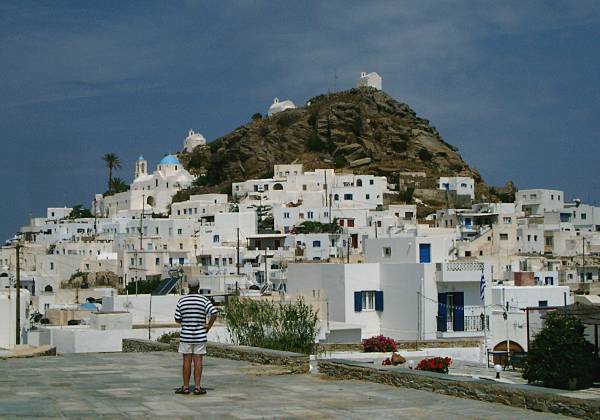