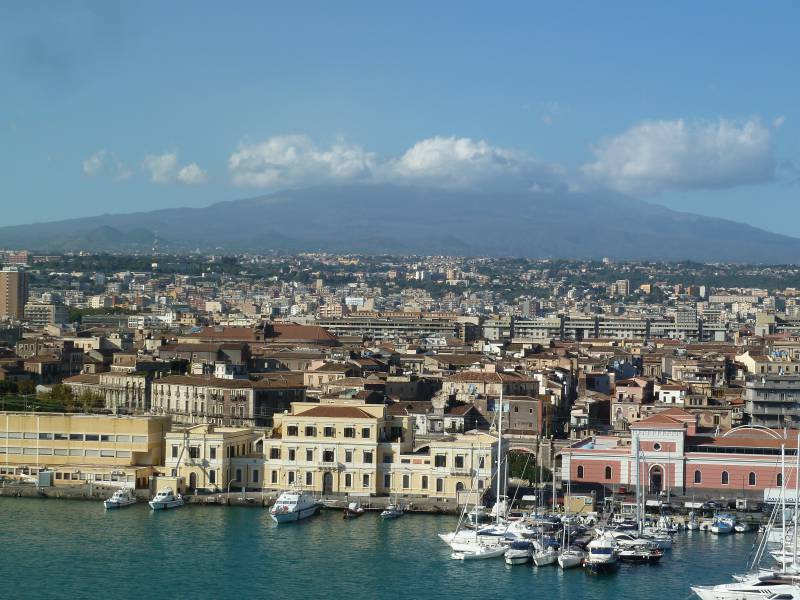 Another port, another tour. This time we used the company Sicily with Mario. He had good reviews on TripAdvisor and they were well deserved. Our driver was very accommodating, to the point that he bought us little local pastries to sample and made sure we got lots of great photos and information on all the places we visited. The company also provides tour services in other parts of Italy as well. There were eight of us on the tour and we started from Catania where our cruise ship had docked. This tour can also be booked out of Messina.

We set off up the highway to Taormina, but continued on up to the village of Castelmola, a small and enchanting village just above Taormina, with an amazing landscape and wonderful views of Giardini-Naxos bay.

It gets its name from the castle or fortification at the top of the rocky outcrop. For such a little town, it has a surprisingly imposing Duomo.  We walked around the narrow lanes for a short while before being driven 5 min down to Taormina, the ancient Greek colony, with its amazing Greek theatre.

On the way, the Belvedere – Piazza Sant’Antonio – gives great views over Taormina and the beaches below, including the beautiful bay and island of Isola Bella.

brimming with them even though it was mid-October. The main street is lined with high-end designer shops, souvenir shops, cafes and restaurants.

Midway along the street is Piazza IX Aprile, the social heart of the town, ringed with churches and restaurants. 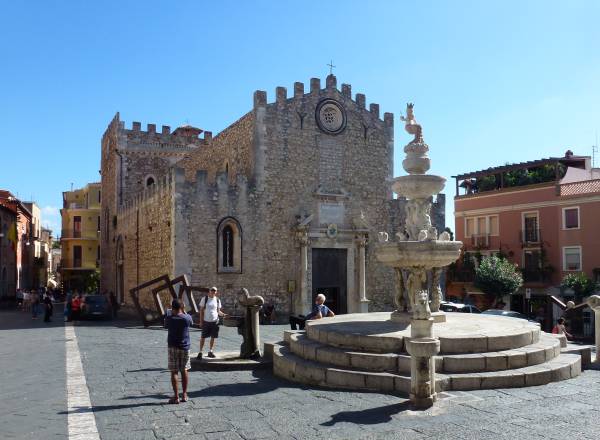 At the far end is the Piazza Duomo, with the cathedral of San Niccolo di Bari. The baroque stone fountain at the centre of the piazza is crowned with a mythical figure, half bull half woman: the symbol of Taormina. Over the years Taormina has been a favourite of writers (such as D H Lawrence), artists, actors, aristocrats and royals. We certainly enjoyed our time there and wished we had longer!

The Greek Theatre is one of the most celebrated ruins in Sicily, on account both of its remarkable preservation and its beautiful location. It was originally built by the Greeks, but was then rebuilt by the Romans, thus explaining some confusion over its name. It is still frequently used for operatic and theatrical performances and for concerts, since it has such good acoustics with most of the walls  preserved, while the distant outlook into the bay of Giardini-Naxos, the town of Taormina and Mt Etna in the distance provides such a magnificent backdrop. 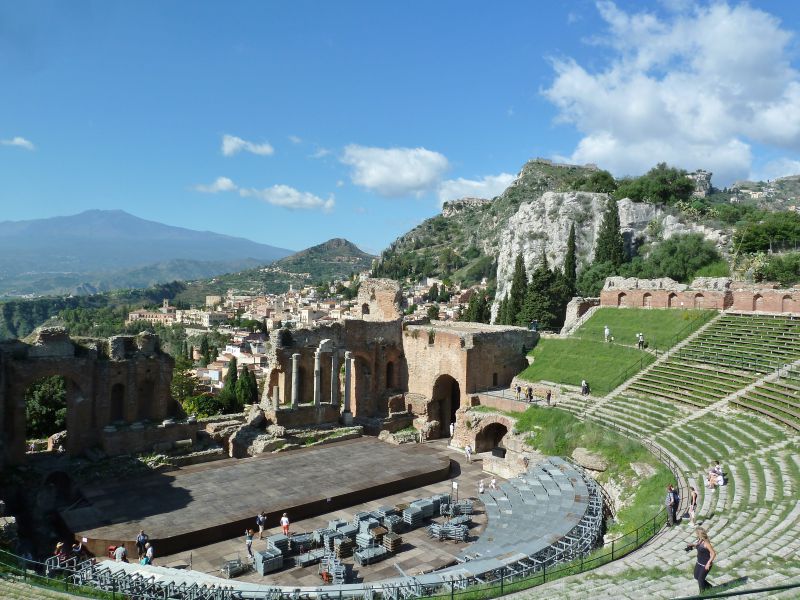 After a couple of hours in Taormina,  we drove back to Catania for a quick independent tour of the centro storico on foot. Catania is a wonderful example of a baroque city, with an amazing cathedral, an enormous number of churches and excavations of many Roman theatres and baths right in the heart of the city. 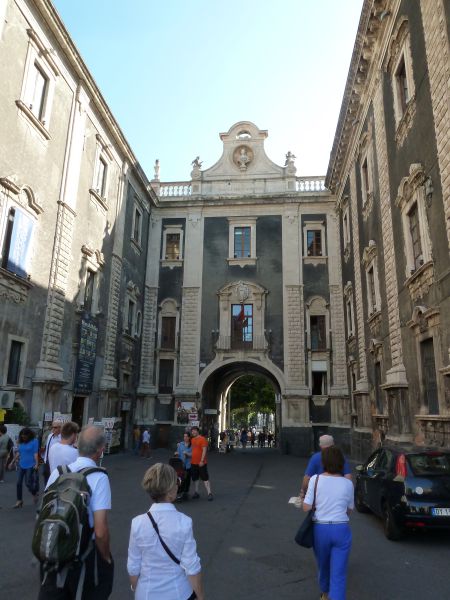 Catania has had the misfortune, being at the base of Mt Etna, of having been badly damaged many times from volcanic eruptions over the course of its history, however in 1693 the city was then completely destroyed by a heavy earthquake and its aftershocks. The city was then rebuilt in the Baroque architecture that nowadays characterises it. Consequently, the city centre of Catania is a UNESCO World Heritage Site. However if Mt Etna has been the cause of Catania’s destruction, it has also been a vital source of the construction of the city, as much of the black volcanic rock which characterises Catania’s beautiful Baroque architecture came from those eruptions. It also made the land around very fertile for farming and vineyards.

The Piazza del Duomo is the first and main square we reached through the arched Porta Uzeda entrance to the harbour side of the city. On one side is the Duomo – the Cathedral  dedicated to St. Agata, the city’s patron saint.

A number of imposing Baroque buildings frame the square which contains a black lava rock Elephant Fountain, the elephant being the symbol of the city.

Elegant via Etnea is the main shopping street. This has most of the city’s imposing buildings and lots of churches. It leads past Piazza Stesicoro, the original centre containing the ruins of the larger of two Roman Amphitheatres in the city and another one of many churches in this city dedicated to St. Agata who, legend says, was martyred (burned to death) on this spot.

Unfortunately this was too brief a look at the old city which contains magnificent gardens and the Opera House dedicated to composer Vincenzo Bellini, who was born here and whose  home is now a museum. Perhaps another visit is in order?