Our first taste of a TGV train was from Montparnasse to Bordeaux, where we were met by friends who kindly hosted us for three days in their home in the suburb of Le Haillan. It was strange to see the landscape passing the window so quickly, but a relief not to have to drive all the way from Paris. We had some serious wine tasting planned over the coming days, having made appointments via email before we left Melbourne at some of the best Grand Cru wineries in the region. 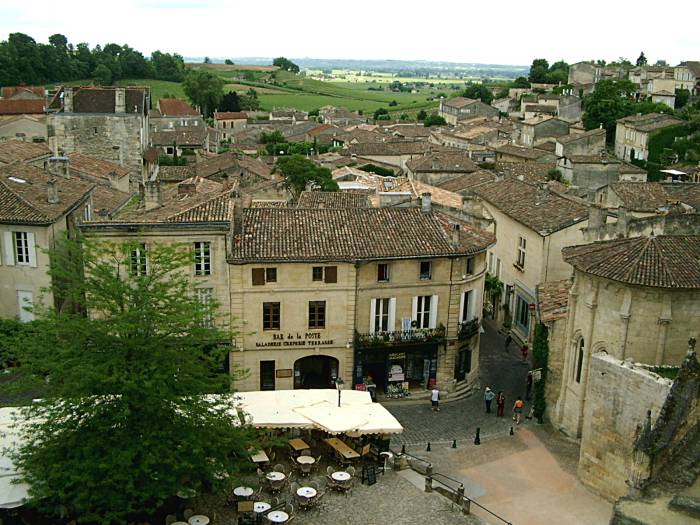 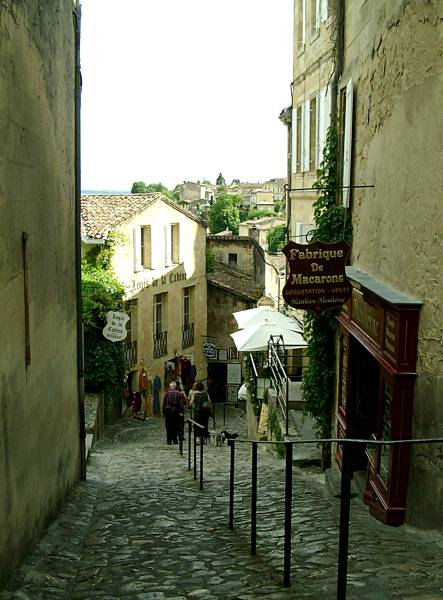 Our hosts really spoiled us with excellent meals, a tour of St Émilion and the city of Bordeaux, and with the use of their car for the next few days. St Émilion is the quintessential French village and is a UNESCO World Heritage Site, with fascinating churches and ruins stretching all along steep and narrow streets. 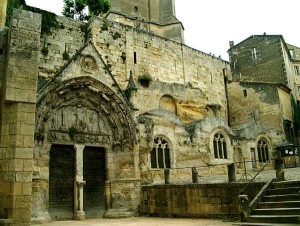 This is a town to explore on foot as it is so compact and fascinating. It dates from the 8th century when Emilion, a Breton Monk, came to settle in a hermitage carved into the rock. A remarkable monolithic church was carved out of solid rock between the end of the 11th and the beginning of the 12th century. Its gigantic proportions make it Europe’s largest monolithic church. From its bell tower there are magnificent views over the countryside.

Situated only 35km from Bordeaux, the area was planted with vines by the Romans in the 2nd Century BC and is the oldest and one of the principal red wine areas of Bordeaux along with the Médoc, Graves and Pomerol. Of course a visit here would not be complete without a tasting at one of the caves (cellars) in town or even at the local vineyards. The wine here is Merlot and Cabernet Franc, as set down in the appellation rules, and  are considered the most robust of the Bordeaux. They are generous, very colored, and reach their maturity quicker than other red Bordeaux. 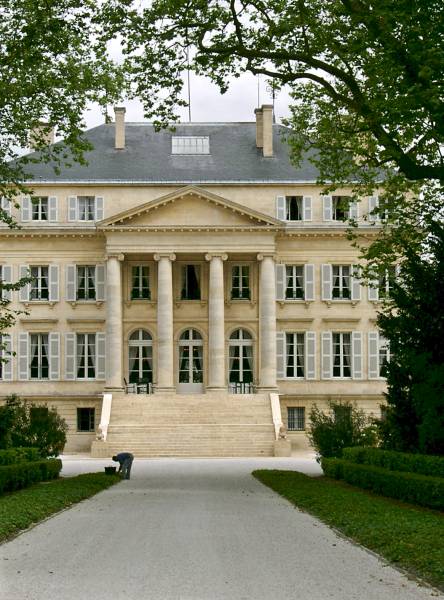 Next day we set off for our tour of the Médoc – north of Bordeaux and on the left bank of the Gironde River. According to the official classification of Bordeaux wines, in 1855, there are only five Premier Crus red wines in this area – Château Margaux, Margaux; Château Mouton Rothschild, Pauillac; Château Lafite Rothschild, Pauillac;  Château Latour, Pauillac; and  Château Haut-Brion, Pessac, Graves. The permissible grape varieties in red Bordeaux are: Cabernet Sauvignon, Merlot, Cabernet Franc, Malbec and Petit Verdot, although the wines in the Médoc are generally Cabernet Sauvignon based. Before we left Australia I had set up appointments via email with most of the Châteaux to do tours and tastings over two days.

The château at Margaux was so beautiful, the one wine we were served was quite good albeit very expensive, but the tour was a bit disappointing after all our heightened expectations. The only other couple on the tour managed to monopolise the guide, so we weren’t told much about the wines. 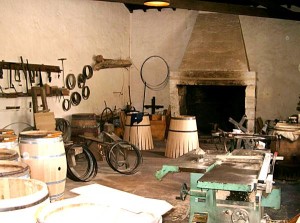 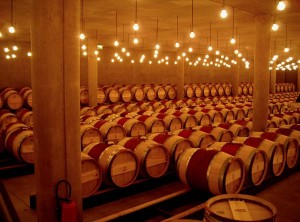 It was fascinating to see the cooperage and how barrels are constructed. It seemed that nothing much had changed here over the centuries. 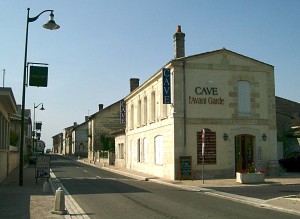 We had a better experience in the cave in the village where an Australian (what a coincidence!) offered us tastings of four boutique wines that were outside the appellation confines, and the better for it. We took care to purchase some. To our surprise, he told us that the locals had embraced the Australian wines that he stocked, such as the D’Arenberg wines from the McLaren Vale in South Australia!

We arrived late for the wine tour at Mouton- 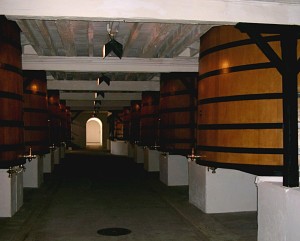 Rothschild as someone had moved the signpost in the village! However we still managed the wine museum tour and a tasting of three barrel samples.  This was the only winery to charge a fee for the visit. While the winery still maintains traditional methods, the tasting area was a relatively modern one with the actual château hidden behind a high wall. 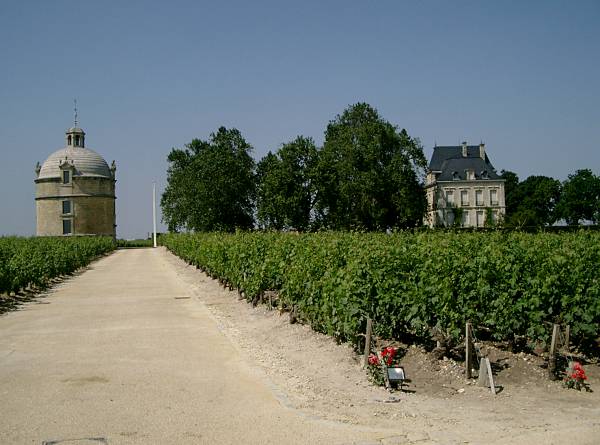 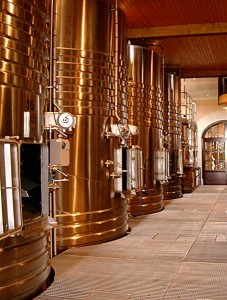 When we reached Château Latour, our guide took us to see a video of the history of the winery and then a comprehensive tour of the winery and bottling area ending with a tasting of a barrel sample of each of their three wines – the Pauillac, Les Forts de Latour and the Grand Vin de Latour, as well as the 2001 Grand Vin. Latour was the first of the premier crus vineyards to modernise their whole production, replacing the old oak fermenting vats with stainless steel temperature-controlled vats. The original tower no longer exists, but in the 1620s a circular tower (La Tour de Saint-Lambert) was built on the estate. Although intended as a pigeon roost, it remains a strong symbol of the vineyard as it is said to have been constructed using the original tower. We were the only visitors, so had a fantastic experience. 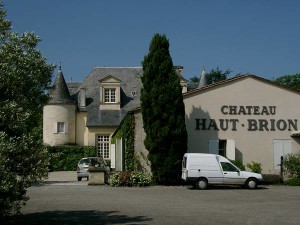 The tour at Haut-Brion was also very good, as was the single wine we tasted (a 1999) – probably the best of the trip. Unusually, Haut-Brion is right in the middle of a mixed residential and commercial area of Pessac, just outside Bordeaux. The estate dates back April 1525, with construction of the château begun in 1549.  Like Margaux, the estate has its own cooperage. 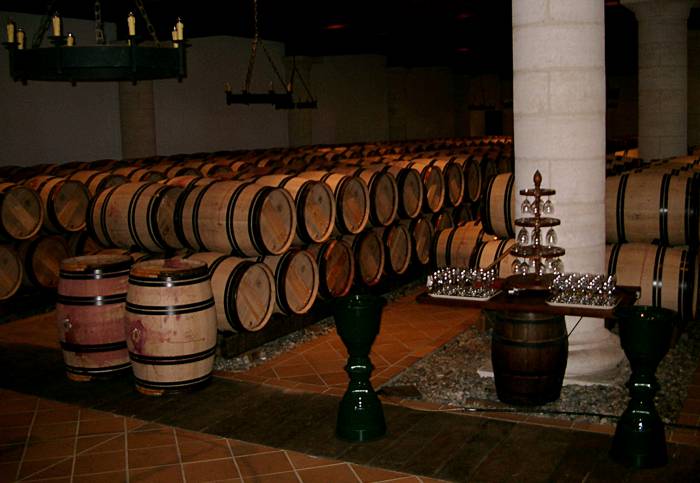