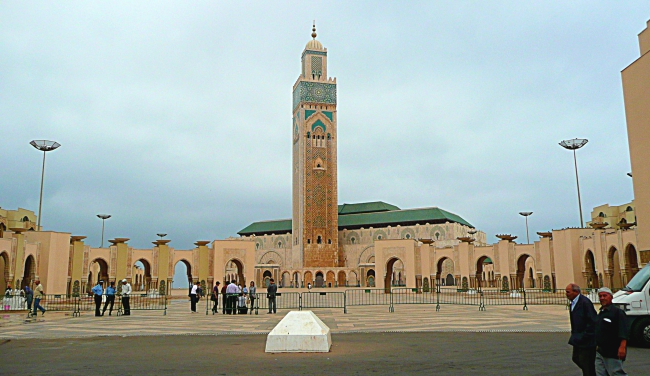 While Rabat is the political capital of Morocco, Casablanca has become the economic and business capital. It is the country’s largest city and its chief port.  An ancient city, it was settled by the Berbers as early as the 7th century AD. Many nations have had an influence on the city over the course of its history. In  1755, the Lisbon earthquake destroyed most of the town, causing the Portuguese to abandon it, but it was rebuilt under Arab rule. During the French protectorate period in the early 20th century a Ville Nouvelle  was designed, combining Moorish and Art Deco styles. During World War II Casablanca was an important strategic port and the site of a large American air base.

Casablanca is the most liberal and progressive of Morocco’s cities. There are no restrictions as to dress and most people we spoke to were able to converse in English. We had tried to find a traditional riad to stay in, but ended up in a multi-storey hotel, the Oum Palace, just a stone’s throw from the medina.

Still enclosed in parts by its original rampart walls, the old quarter is a maze of narrow streets and whitewashed brick or stone houses. In a semicircle outside the walls is the town built by the French. This unassuming small medina has undergone some restoration in recent years. Included in this project have been the western walls of the medina, its skala, or fortress, which is now a restaurant, and its colonial-period clock tower by the Marrakech gate. Unfortunately we didn’t get to see it till the evening, so photos were not successful. We were also rather disappointed by it in comparison to the one in Fès, or maybe just tired after a day of travel and sightseeing, so we retired to the bar of one of the American-styled grand hotels nearby where it was possible to relax in style and be served an alcoholic drink, instead.

Next morning our driver took us to see the vast, awe-inspiring Hassan II Mosque, situated partly on reclaimed land along the coast. This is the number one tourist attraction in Casablanca and was absolutely amazing.  The mosque has room for 25,000 worshippers inside, and a further 80,000 can be accommodated in the mosque’s courtyard. It covers 90,00 square metres. 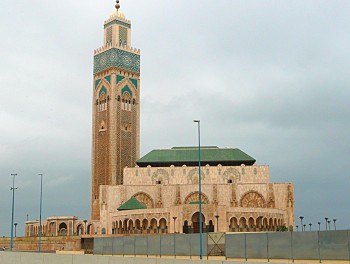 Its minaret is the world’s tallest at 210 metres. Work on the mosque started in 1980, and was completed in 1993. It is one of the two main mosques in Morocco open to non-Muslims. 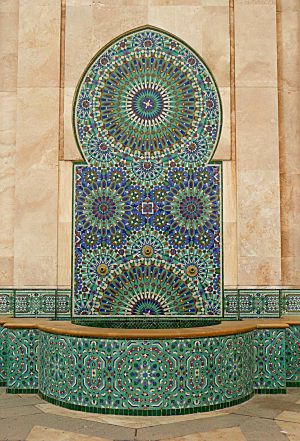 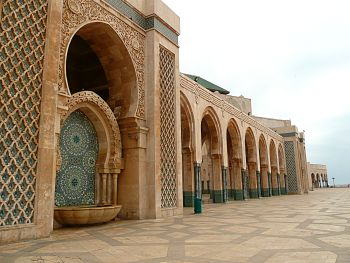 Comprised of a vast, airy interior complete with traditional fountains, a medersa (religious school), a library and meeting rooms, the mosque also has and a huge hammam in the basement (not in use at the time of our visit). Modern elements include a centrally heated tiled floor, electric doors, a retractable roof and a section of glass flooring allowing the faithful to see the Atlantic washing the rocks below.

Above all though, it is the size and elaborate decoration of the prayer hall that is most striking.  Designed more like a basilica inside, it is decorated with intricate woodcarving, zellij  and stucco moulding. The doors were forged in gold and decorated with turquoise, red and cobalt paint. 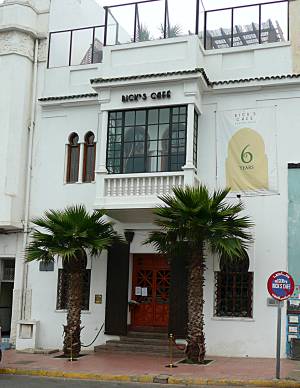 Earlier that morning, on the way to this fabulous place, we had passed the restaurant and bar, Rick’s Café,  modelled after the cafe in the classic film Casablanca. Why tour operators would think this was an important site defies logic, since it did not open till 2004 and the movie was filmed almost entirely on the Hollywood set!

Next stop, the sights and sounds of Marrakech, somewhere I had been yearning to visit for years. This would be the most exciting city on our road trip, three hours drive away.