Troy and Pergamon – Fact and Fiction

We woke to rain, followed by thunder and lightning, but luckily it was  the only wet day we had in our fortnight’s holiday in Turkey. Today we were off to visit the ruins of Troy, the city of Homeric legend and the epic battle between the Greeks and the Trojans.  The site is not far from the city of Çanakkale, on a hill called Hisarlik, near the village of Tevfikiye. The ancient city of Troy (Ilios) dates from about 3,000 years BC and was a thriving mercantile centre on the Dardanelles. Now, after centuries of silting up of the bay and its river mouth, the site is about 5km inland.

Serious excavation of the site began under businessman and archaeologist Heinrich Schliemann in 1866. He found a series of cities layered upon each other, dating from the Bronze Age to the Roman period. Subsequent excavations over the years have determined that there were nine levels and that the level thought by Schliemann to be the Troy of legend, was incorrectly identified. 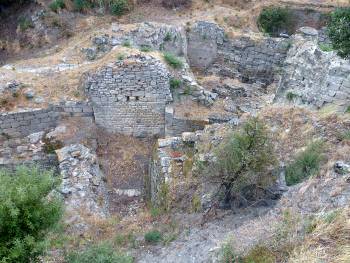 Early excavation techniques were not as careful as they are now and much of the evidence has been confused. It is now thought that Homer’s Troy existed at level VII, from about 1250BC to 1184BC, when there are signs of fire and battle in the ruins. Artifacts from Troy can be seen in the Archaeological Museum in Ankara and in Berlin. The archaeological site of Troy was added to the UNESCO World Heritage list in 1998.

The rain eased up and we were able to wander around the ruins and see for ourselves how confusing the site really is. The best preserved feature is the small Roman theatre (Odeon) which was one of the later additions and was renovated under the Emperor Hadrian in 124 AD.

And although it is terribly touristic, we could not leave without clambering up into the Wooden Horse – a recreation of the gift horse in Homer’s tale, The Iliad.

In the afternoon, now under a blazing sun, we visited the ancient Greek and Roman ruins at Pergamon, north-west of the modern day city of Bergama in Izmir province. The site covers an enormous area from the upper Acropolis down to a lower Acropolis and nearly three kilometres away,  the Sanctuary of Asclepius.

Although the city dates from the time of the ancient Achaean Greeks, it  flourished under Roman rule and under Emperor Hadrian  (117 – 138) temples, a stadium, a theatre, a huge forum and an amphitheatre were constructed. The the shrine to Asclepius (the god of healing) was expanded into a lavish spa. This sanctuary grew in fame and was considered one of the most famous therapeutic and healing centers of the Roman world. Pergamon was also a flourishing center for the production of parchment, and the library there was believed to contain 200,000 volumes, second only in the ancient Greek world to that of Alexandria.

We only had time to cover the Sanctuary, or Asclepion, which was approached along an 820 metre colonnaded sacred way – the Via Tecta. In this place people with health problems could bathe in the water of the sacred spring, and in the patients’ dreams Asclepius ( according to the tale) would appear in a vision to tell them how to cure their illness. Galen, the most famous doctor in the ancient Roman Empire, was born at Pergamon and worked at the Asclepion for many years. Remains are still visible of a Roman theatre, the temple of Asclepius, the treatment centre and an underground passageway.

Our hotel that night was in the seaside city of Izmir – the jumping off point for many tourists to the glories of Ephesus. We were certainly going to see a lot of Roman ruins on this holiday!