Coffs Harbour is a lovely coastal city in the mid-north of NSW, about 540 km (340 mi) north of Sydney. It offers plenty to see and do in the area, and as we like to take an Australian-based holiday from time to time and were looking for a new destination, we decided to check it out. The local tourism association even has its own app to help tourists get the most out of their holidays.

We have  membership with Australian timeshare company, Holiday Concepts (part of the Wyndham group), which has resorts there, so we decided to stay in the Pacific Bay Resort Precinct, 10 minutes north of the city, at the Ramada – Treetops  for a week.  There are regular passenger flights each day from Melbourne, so we were able to find a cheap non-stop fare with Tiger,  making  this  a  very  economical holiday all round.

Coffs, as the locals call it, was once known for its banana production and this area is known as the Banana Coast. The most well known tourist attraction in the area is The Big Banana, built in 1964. On the Pacific Highway just north of the city, the grounds of the amusement park are set amongst a banana plantation featuring a large walk-through banana. Other attractions include a downhill toboggan ride, ice skating rink, a water park and the World of Bananas educational experience. Naturally, the souvenir shop sells all types of banana-related products. It is very popular with family groups, but we only stopped for the obligatory photo on the way to our accommodation.

‘Treetops’ boasts a heated pool and spa, walking tracks through the rainforest to the beach or along the cliff tops, a gym and a barbecue area.

Of course hubby was quick to take advantage of the golf and I even walked around with him since it was only nine holes. It is a pretty course, but not particularly challenging as there are only par 3 holes.

Since golf was going to be a high priority on the relaxing holiday, we investigated several clubs in the area. The most recommended is the Bonville Golf Resort,  only 12 km south of Coffs, and consistently voted as the most beautiful in Australia. The Par 72 championship course rises and dips through the serene and beautiful layout with each fairway isolated and private from the

next, necessitating the use of electric carts. Bonville is a natural sanctuary for a wide range of native Australian species including black cockatoos, koalas, kookaburras, water dragons, goannas and in the evening, swamp wallabies. The resort also offers accommodation, a billabong style swimming pool, and an award winning restaurant where we dined at the end of the day.

As usual when Vin golfs, I go seeking out other attractions. The town of Bellingen, 25km to the south west of Bonville, with its quaint streetscape and historic buildings provided that for me.

I wandered at leisure, finding treasure in the Old Butter Factory which had been rebirthed as a café, galleries and shops. One shop, Cargo Lane, was full of interesting furnishings, home and gift wares with many specially imported from Morocco.

Because we are keen walkers, we couldn’t resist driving beyond Bellingen the next day along the aptly named Waterfall Way, so we could experience walking through the Dorrigo National Park.

Part of the Gondwana Rainforests of Australia World Heritage Area,  it offers stunning scenery that is millions of years old. There are many different walking trails available for viewing wildlife, rainforest and waterfalls, as well as a skywalk lookout, an information centre, cafe and a picnic area.

Skywalk lookout is a 70m boardwalk that soars over the edge of the escarpment some 21m above the rainforest. From here you get a bird’s-eye view of the surrounding valleys and gorges from the Bellinger Valley to the coast.

One of our favourite waterfalls was the Crystal Shower Falls, where you can actually access a rocky cavern behind the waterfall. A great view can be had from behind the falls out to the suspension bridge opposite it. 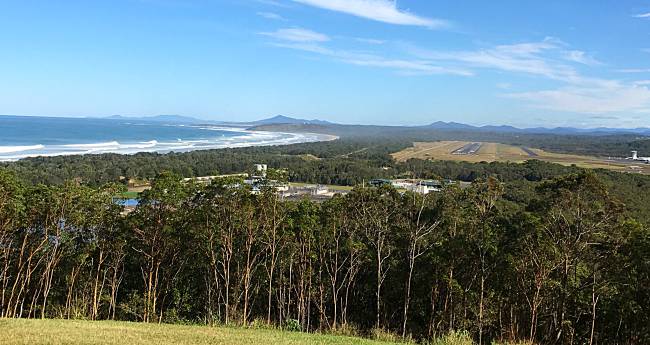 From the Beacon Hill lookout, on the southern edge of Coffs Harbour, there are wonderful views of the south coast, past the racecourse and the airport to Sawtell, and out to the Solitary Islands.

To the north the city spreads out, with the harbour, Mutton Bird Island and Jetty Beach along the coast.  The extremely long pier is a relic of the once busy timber industry port. The cute little harbour is home to  many fishing and sailing boats, while the breakwater extends right out to the island which is a wedge-tailed shearwater rookery and a place of special significance for the local Aboriginal people.

One of the reasons for choosing to holiday in Coffs Harbour was that it was supposed to have better weather than Melbourne during the winter. Unfortunately this particular week experienced savage storms all along the east coast of Australia. The seas were extremely rough and waves crashed over the breakwater at the harbour, wrecking the harbour master’s office and sinking several boats moored within the “safety” of the harbour.

Creeks and roads were flooded due to the heavy rains. When the skies cleared a couple of days later, we made a strange discovery in a bunker at the Pacific Bay golf course: fish had been swept in from a nearby creek during the high water and then left for dead when water receded!

When the chance came to visit Coffs Harbour the following year with friends, we jumped at it. Vin was keen to play at Bonville again, while I was sure the Coffs Coast held more interesting activities and sights. The following blog, Coffs Harbour Part 2, takes up the story.