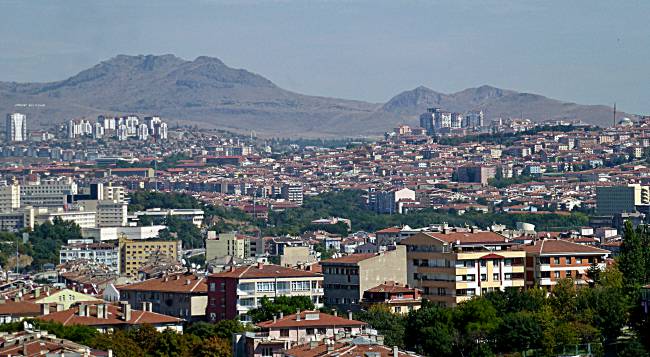 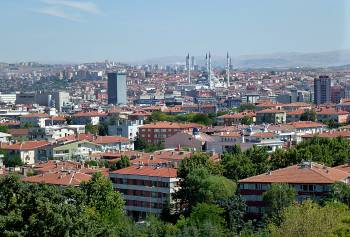 The long drive from Cappadocia to Ankara was broken up with several stops to ease the monotony, so we finally arrived in the city centre in early afternoon. Our main focus today was visiting the Mausoleum of Mustafa Kemal, known as Atatürk – Father of  modern Turkey. 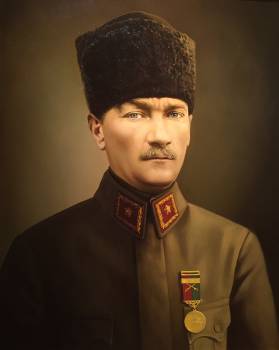 Atatürk’s reputation and deeds were already known to us and we had read his wise words at Gallipoli, but the tour through his museum in Ankara really helped us to appreciate the impact he had on the development of Turkey as its leader during the War of Independence and as the Republic’s first president.

The Atatürk Mausoleum, or Anitkabir, rests on the top of a hill (Rasateppe) which not only gave us great views all over Ankara, but is likewise able to be seen by all in the city, as befits a place of such significance. Built over a period of nine years, commencing in 1944, 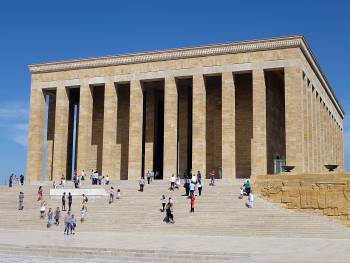 the complex contains the mausoleum building, a Ceremonial Plaza, a Road of Lions and a Peace Park that surrounds the monument.  There are also ten towers and various groups of statues, as well as arcades which surround the plaza containing the museum and art gallery. The site is also the final resting place of İsmet İnönü, the second President of Turkey, who was interred there after he died in 1973. His tomb faces the Atatürk Mausoleum, on the opposite side of the plaza. 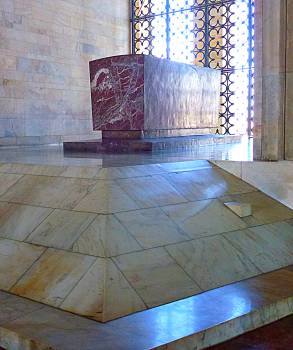 The actual mausoleum building, or Hall of Honour, is the most important part, as it houses the symbolic sarcophagus of Atatürk. Symbolic, because it is empty – the actual tomb is below in the basement. In keeping with his wish that his remains return to the soil of his homeland, soil from all parts of Turkey was placed in his tomb. 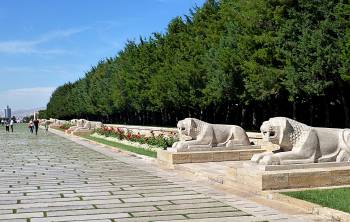 Arriving at the site you first encounter the Road of Lions. 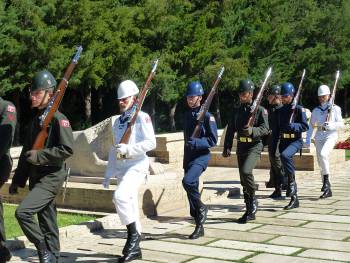 The 262 m pedestrian walkway is lined on both sides by twelve pairs of lions carved in a Hittite style representing the 24 ancient tribes of Turkey and symbolising power and peace. At the start it has a couple of small buildings – one a kiosk, the other an interpretative centre displaying a model of the complex as well as photos of the various stages of construction. In front of each building are two groups of statues – one male, the other female – representing the pride and determination of the Turkish people. On my way along the pathway I was fascinated to see the changing of the guard executed with military and dramatic precision.

The museum houses a wax effigy of Atatürk, writings, letters and items belonging to Atatürk, as well as an exhibition of photographs recordings of important moments of his life and videos from the establishment of the Republic. I was particularly impressed with the diorama depicting the battle at Gallipoli and other memorabilia from that time. There is also an art gallery and rooms where his collection of cars is displayed. 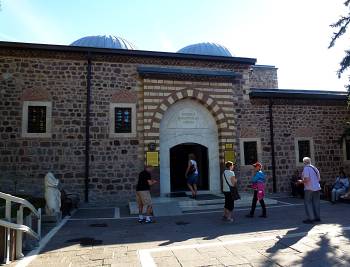 The other main tourist site in Ankara is the Museum of Anatolian Civilizations. Housed in a restored Ottoman bazaar, the museum collections start with the Paleolithic era, and continue chronologically through the Neolithic, Early Bronze, Assyrian trading colonies, Hittite, Phrygian, Urartian, Greek, Hellenistic, Roman, Byzantine, Seljuk and Ottoman periods. The exhibits of gold, silver, glass, marble and bronze works date back as far as the second half of the first millennium BC. I 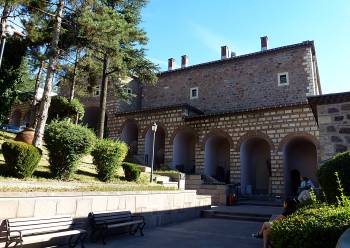 t was particularly interesting to us to see artifacts brought for display from the places we had explored during our tour of Turkey, such as Ephesus, Pergamon and Troy. Some of these artifacts had been removed from Turkey to museums overseas, but have since been returned to their rightful owners. 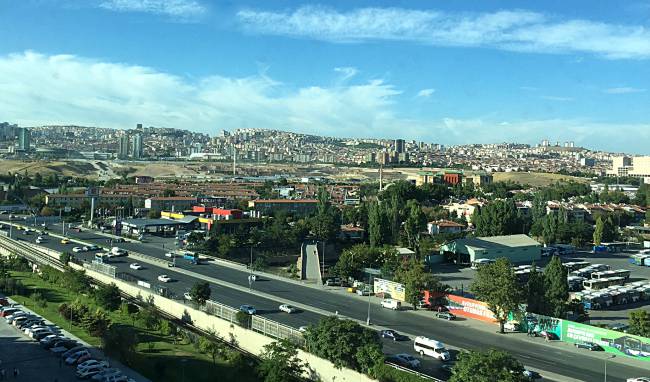 That evening our meal was not included at our hotel – Crown Plaza Ankara – so we took the opportunity to try a more authentic local restaurant. After checking out the suggestions on Trip Advisor, we set off with another Aussie couple, by taxi, to a restaurant highly recommended for its slow-cooked lamb – the Bolu Akın Lokantası in the nearby suburb of Etlik. Well, the taxi driver thought he’d taken us to the wrong place, and so did we. It was a cafe at a truck or bus park, not a restaurant as expected. We would probably have walked out again if it had been possible as we felt totally out of place and it had all the ambiance of a 1930s diner, but our taxi had gone and we were in unfamiliar territory. Even the staff seemed surprised we had come – strange Aussies!  However we were warmly greeted and at least the waiter had some English. The guys had been wanting some beer, but no alcohol was allowed. The menu was only in Turkish, but it was also illustrated, which helped. We had several types of lamb dishes all with different flavours. They were all so succulent and tasty. They also gave us tomato, onion, peppers, bread, water, rice and coffee at no cost and we ordered a traditional cold rice pudding to share. It all cost TL 105 for the four of us, or AUD $12 per head. Fantastic!  Service could not have been better – after all we were the only diners apart from a lonely truck driver – and our meal was over in just over an hour. It goes to show – you can’t judge a book by its cover. This was the best food we had in the two weeks we had been in Turkey. Minutes after ringing the same taxi driver, he was there to collect us and take us back to our hotel – where the guys finally got their cleansing ale! 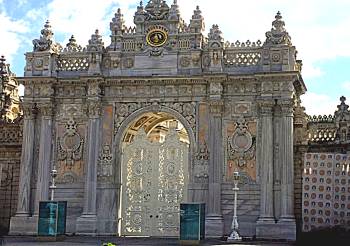 The next day was the last on our tour. It was an early start for a four and a half hour drive back to Istanbul. The views as we crossed the Bosphorus Bridge were spectacular and we passed the ornate Dolmabahçe Palace main entrance in the Beşiktaş district before arriving at the ferry dock near the Galata Bridge, where we embarked upon a relaxing Bosphorus cruise. After a special farewell dinner in our hotel we managed just a few hours sleep before another early departure for the Sabiha Gökçen International Airport on the Asian side of the city and a flight to Barcelona. Our time in Turkey was so enjoyable and over all too soon, but we hope to return someday.