Delos – Sanctuary of the Gods

The island of Delos, a UNESCO World Heritage site just to the west of Mykonos, is one of the most important mythological, historical and archaeological sites in Greece. The island was first inhabited during the Mycenaean period, about 1400 BC. Its fame lay in the claim that the gods Apollo and Artemis were born there and so it became a place of pilgrimage in the 7th century BC for the Ionian Greeks. Its strategic importance for trade led to it being made the headquarters of the Delian League of Greece, at one time housing over 30,000 inhabitants and later under the Romans it also became the centre of the slave trade. However this barren island had little resources to be self-supporting and no indigenous inhabitants, in part because of a rule that no-one was allowed to be born or to die there, so after its destruction in 88 BC and a succession of raids and looting by various powers, it was ultimately abandoned. Only archaeologists and guardians live there now and no tourists may stay there overnight.

We took a day trip there by boat from Mykonos, but without a guide, we had to manage with simple and inadequate brochures.  There are several temples to gods such as Apollo, Isis, Hera and Dionysus and a Sacred Way flanked by a row of (replica) marble lions known as the Terrace of the Lions.  Many of the original artifacts have been acquired by museums both in Greece and overseas, leaving only copies on the island. There are remains of a stadium, a hippodrome, a gymnasium and a theatre. 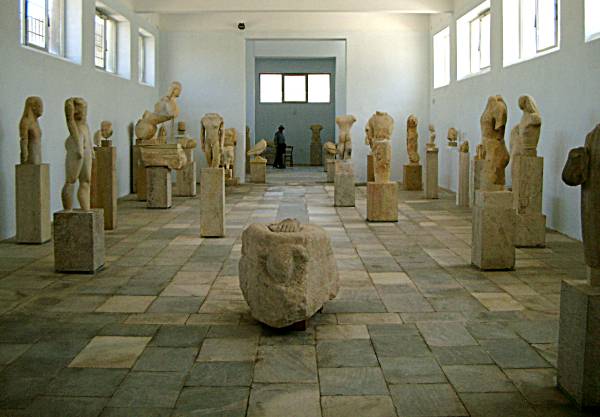 The Delos Museum has an extensive and unique collection of sculptures, pottery and artifacts from the Archaic period to the late Hellenistic period. The site also has a bar and very basic cafeteria and information centre.

A path leads upwards from the Theatre of Delos to Mount Kynthos, passing on its way the Grotto of Hercules, from where great views can be seen of the ruins and the islands beyond. It was a fine, sunny day which seemed hotter than it really was due to all the walking and lack of shade. We were tired, hungry and dehydrated by the end of it.

So if you find yourself on Mykonos and are looking to visit a Greek island that is quite extraordinary, take a boat ride to Delos. Bring water, bring food, wear sensible shoes, get organized with maps and background information or hire a guide. But if your idea of a Greek island is beaches, restaurants and nightlife, then this is not the one for you.